You are at:Home»Conservation»Chimps Belong in the Wild, Not in the Movies

Young chimpanzees are still being taken from their mothers for the pet and entertainment trade at a troubling rate. These wild animals are also being exploited in the U.S., where they are not naturally found. Recently, a pair of 5-year-old chimpanzees from the Myrtle Beach Safari were taken to a screening of War for the Planet of the Apes. Vali and Sugriva were led into the theater on leashes, gawked at by strangers, and given popcorn and apple juice to snack on. If these names and this story sound familiar, it’s because the Jane Goodall Institute reported about the same group exploiting the same chimps one year ago. Read about it here.

Even though this may seem like a cute stunt, there are many problems with this situation. The press reported the story making it out to sound like it was endearing that the chimps were paraded in like babies to watch a film about the plight of their species. In reality, Vali and Sugriva were just being used as a publicity stunt to attract visitors to the “safari” park. They are not “pets” who should suffer for our entertainment. 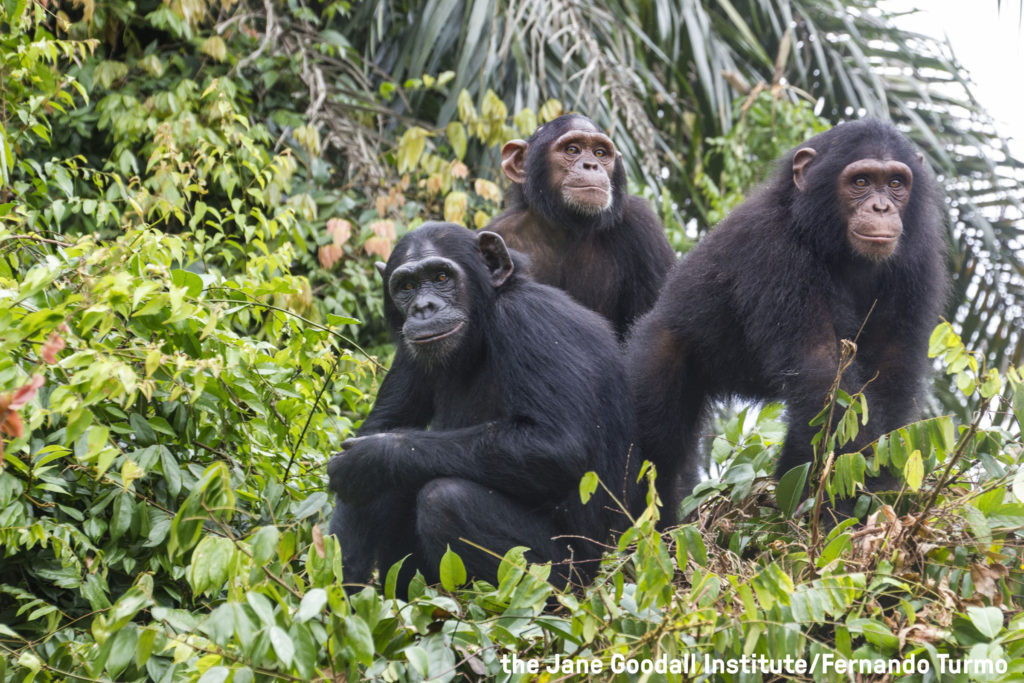 Videos of “entertaining” chimps often go viral and people leave with a misguided perception of these creatures. When chimps smile and show their teeth it can actually represent the opposite emotion as when humans smile. Chimps, including Vali and Sugriva, are part of an endangered species both in captivity and in the wild, but some may think that these animals aren’t endangered because they are in the U.S. enjoying a movie! This is very a damaging message.

To support the work of saving chimpanzees, JGI and 20th Century Fox formed a partnership in honor of the new film War for the Planet of the Apes. The film also used CGI to create the apes, instead of live animal actors, which is a huge step forward in terms of removing the demand to use live animals in entertainment (read more in our exclusive interview with Weta Digital who worked on the CG apes here.) It is ironic that Vali and Sugriva were used in this way for publicity by being taken to see a movie that motivates people to stop this cruel behavior and treatment of our closest living relatives.

“I think that the Planet of the Apes series makes people think about the apes and perhaps our relationship to them. And anything that makes us think about our own humanity in relation to the rest of the animal kingdom is important.” – Dr. Jane Goodall

Unfortunately, Vali and Sugriva’s circumstance is not unique. According to the UN Environment Program, an estimated 3,000 great apes are taken from the wild every year for the illegal pet and entertainment trade. Chimps are the most vulnerable of the great apes and their population is declining in their range in Africa. JGI works to rescue and protect all chimps, but the chimps who end up at sanctuaries such as JGI’s Tchimpounga Chimpanzee Rehabilitation Center in the Republic of the Congo, like Mambou, Lousingo, Motambo, and Luc, are the lucky ones. They were saved, but Vali and Sugriva could have a different fate when they grow up and become too big or hostile for their handlers.

Here’s what you can do to help #StoptheShow.
(Read more about the campaign here.)

Become a Chimp Guardian: click here to support the care of nearly 150 rescued chimpanzees in our Tchimpounga Chimpanzee Rehabilitation Center in Republic of Congo. The JGI team is in the process of transferring the chimps to island sanctuary sites, where they will be free to roam in the forests with their kind once more.

Sign the Petition: Join our #StoptheShow campaign by using your voice to protect chimpanzees along with other animals and prevent them being put into harmful situations, like Vali and Sugriva, in the name of “entertainment.” Sign our petition and share with you friends, family and loved ones. 2,961 have already signed and with your help, we hope to double that number to 6,000, and keep going!

Get the T-Shirt: Did you know we share 98.6 % genetic material with chimpanzees? We believe chimps should remain wild and free and not be used in the entertainment industry. Show you do, too: http://bit.ly/2rkhblf. All proceeds benefit the Jane Goodall Institute’s programs to keep chimps wild and free + rescue chimps orphaned by the illegal pet/entertainment and bush meat trades.

Sophia Glazer is currently a summer intern for Community Engagement at the Jane Goodall Institute. She is a rising junior at Tulane University, intending to receive a B.S. in Public Health with a minor in Business Management and Psychology. Sophia was thrilled to meet her long time heroine, Dr. Jane Goodall through the Tomorrow and Beyond lecture tour at Tulane. She is excited to work with JGI and write for Good For All News to spread awareness about what we can do to improve the future of our planet. Sophia has always felt a connection with Dr. Goodall because she too feels one with nature and is passionate about animal rights.