Eight years ago, a small box arrived at Tchimpounga. When the caretakers opened the box they found a small creature dressed up in baby clothes. This was in fact no baby, but instead, an infant chimpanzee kept in this box for transport. This frightened little one was found forcibly dressed in trousers and a striped sweater, disoriented and alone.

Stolen From the Wild

There are so many similarities between chimpanzees and humans; our shared ability to problem solve, form strong familial bonds, and a chimp infant holds a remarkable physical and behavioral likeness to a human baby (Learn more about the Jane Goodall Institute’s Chimpanzee Research here). Because of their uncanny resemblance to our own species (sharing 98.6% of our DNA), many baby chimps are stolen from their forest homes to be sold into the illegal pet trade, often killing their mothers in the process. Young chimpanzees may resemble human infants in their actions, affection and need for constant nurturing, but it is impossible for a human caregiver to raise an infant chimpanzee to be a happy, healthy, and well-adjusted adult ape.

Chimpanzees are meant to stay by their mother’s side for years, learning chimpanzee ways and exploring the forest under her protection. Sadly, many people cannot look past infant chimpanzees’ cute faces and loving natures to see the pain inflicted upon the chimpanzee when they are taken from their mother. Instead, owners of chimpanzee infants often try to humanize them by teaching them human-like behaviors, and sadly even try dressing them up like human babies, like little Lousingo. This is not the life these incredible creatures are intended to live. 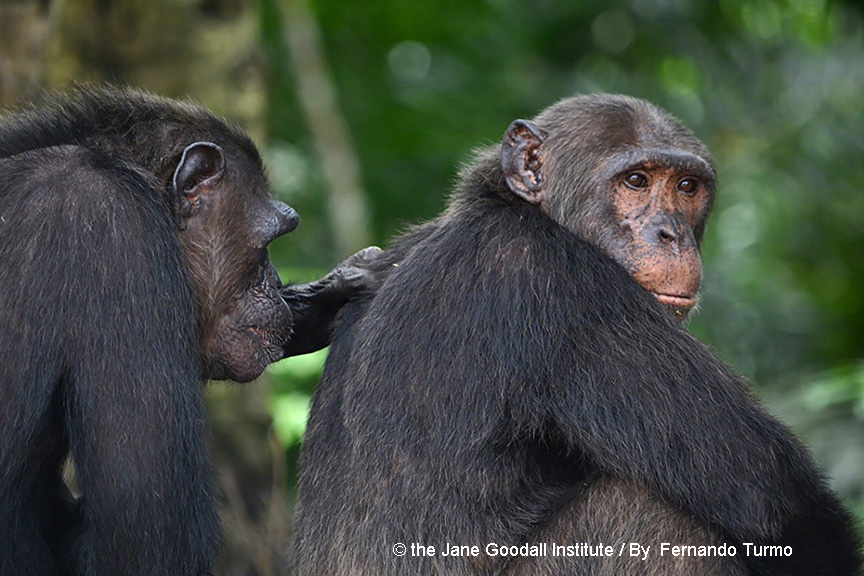 Lousingo has always been a bit reserved, perhaps due to the trauma of being snatched from his mother and potentially witnessing her death at the hands of poachers. He cried a lot when he first arrived at the Jane Goodall Institute’s Tchimpounga Chimpanzee Rehabilitation Center in Republic of Congo, and his chimpanzee peers pushed him around. Now, after years of being cared for by a professional staff, surrounded by other chimpanzees, Lousingo is growing into a strong young chimp. More capable of defending himself, young Lousingo is beginning to perform displays to show off as a strong male. After a desperate and damaging infancy as an illegal pet, Lousingo is now able to return to the forest enjoying life on the Tchimpounga sanctuary island of Tchibebé.

Internationally, chimpanzees like Lousingo and other great apes are used as props in television, film, circuses, roadside attractions, as pets and as social media share-able content. This cruel business removes chimps from their mothers at an early age, puts them into torturous training programs, asks them to perform unnatural acts, and eventually tosses these beautiful, highly social and perceptive animals aside when they are too large or aggressive to manage.