You are at:Home»Seriously Good For All»War for the Planet of the Apes Partners with JGI To Help Chimps

What compels us about the narrative of a young woman entering into an unknown jungle to discover a world of primates, so much like ourselves? It is the realization of our ultimate connection to these beings; a learned respect for something within great apes and all those derived from this shared earthly and ancient evolutionary chain that is so precious. This story – Dr. Jane Goodall’s story of a kinship with chimpanzees and all animals – holds a similar attention and fascination for people around the world as another story of apes for the same reasons:The Planet of the Apes. In a perfect and necessary partnership, and in honor of the upcoming release of the new War for the Planet of the Apes, 20th Century Fox will be working with the Jane Goodall Institute to provide care for rescued chimpanzees at Tchimpounga Chimpanzee Rehabilitation Center in Republic of Congo.

“I think that the Planet of the Apes series makes people think about the apes and perhaps our relationship to them. And anything that makes us think about our own humanity in relation to the rest of the animal kingdom is important. So I think the series has helped.” – Dr. Jane Goodall

The center, currently housing around rescued 150 chimpanzees, represents a place of safety and kindness from humanity – the likes of which many of these chimps have not seen in their early years. Most of the rescued chimpanzees are victims of the illegal entertainment/ “pet” or bushmeat trades, having been orphaned as infants, torn from their forest homes and families. Tchimpounga is their second chance, enabling them to create bonds with other chimpanzees along with their human caretakers, and it is through the shared stories of these beings that we are best able to understand their uniqueness and feel compelled to protect them. 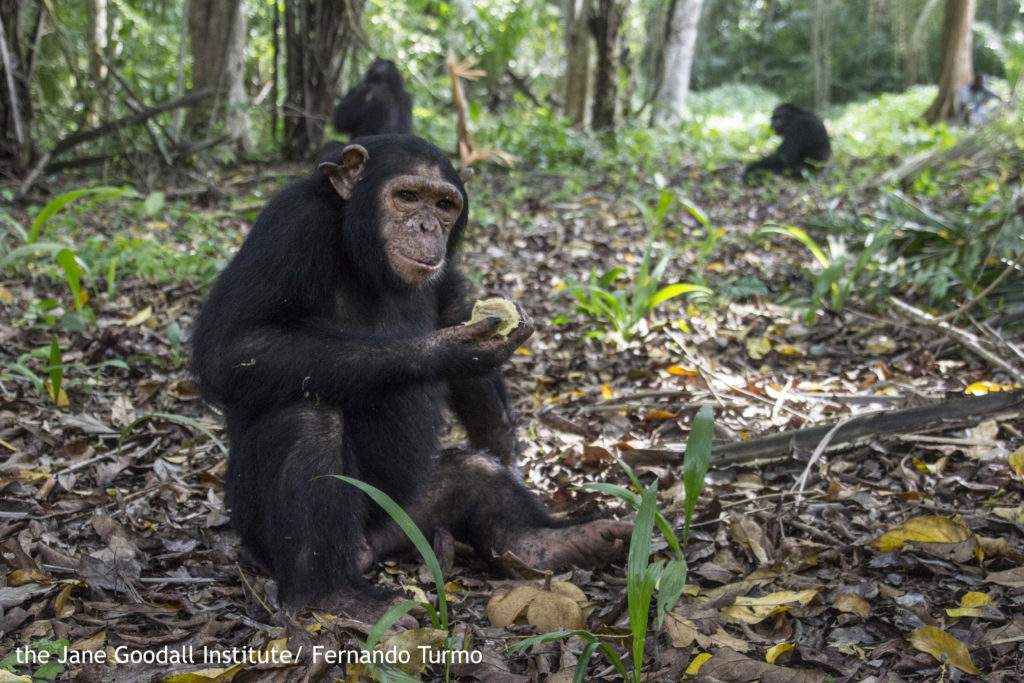 “It is an honor and a privilege to partner with the Jane Goodall Institute in providing needed care for our closest living animal relatives. Over the course of filming Caesar’s cinematic journey, it’s fascinated me to learn so much about apes and chimpanzees, these amazing sentient animals who organize, strategize and even socialize in much the same way as humans. Our hope is this reimagined Apes franchise will spark a fresh awareness, compassion and respect for these majestic species for generations to come.”  – War for the Planet of the Apes director, Matt Reeves.

The legacy of The Planet of the Apes films has been largely to create a greater sense of perspective in that humanity, or that which we deem moral, intelligent, compassionate or fundamentally “better,” is a shadow, and that our similarities to other animals, particularly other great apes, are much greater than we have imagined. In the films, various species of apes band together to create their own communities. Similarly, the chimpanzees at Tchimpounga are brought together to build their own communities, despite being biologically unrelated, to thrive and live happy, dynamic lives. The support of 20th Century Fox will help provide these chimpanzees with an excellent quality of life, many of whom will be able to live out their days on the Tchimpounga island sanctuary sites – returning to the forest once more to live with their new ape families.

“Many of the chimpanzees rescued by JGI were orphaned to be taken as pets or for ‘roadside attractions.’ While use of great apes in entertainment may be diminishing in some regions, it is increasing in others. Not only is there no need to use chimpanzees and other great apes in entertainment, but it is a moral imperative to find alternatives. With films like War for the Planet of the Apes using effective and magnificent human actor performance capture and computer generated imagery, it demonstrates to the world a better way forward for chimps and all animals.”
– Dr. Carlos Drews, executive director, the Jane Goodall Institute

As a special thanks for this partnership, the Jane Goodall Institute has chosen to name housing on Tchindzoulou island, the largest of the three island sanctuary sites, after War for the Planet of the Apes’ hero chimpanzee character, Caesar.

To learn more about War for the Planet of the Apes visit warfortheplanet.com.