You are at:Home»Conservation»A Bush Walk with Pea the Pangolin in Mozambique
Pangolins are nocturnal and solitary. Just as people around the world are hearing more about them, the demand for their meat and scales is driving them toward extinction. In our travels in Africa, my husband Mark and I have longed to see a Pangolin, without success…until we met Pea. Rescued from poachers and cared for by The Niassa Lion Project in Mozambique until his ultimate release, we had the privilege of joining Pea on nightly forages with scouts to prepare him for life in the wild. 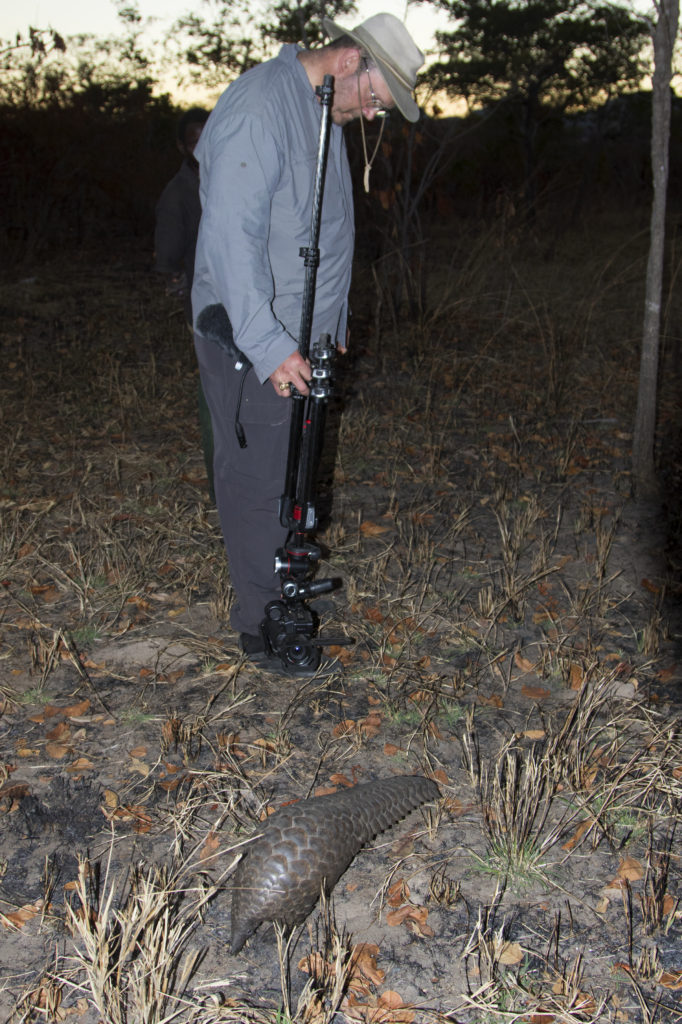 As they are so rarely seen, I wanted Pea to reveal a bit of himself in these photos and a video clip Mark took during our walks. To us he is a gentle vulnerable soul with a long, pink, sticky tongue. His tongue is the perfect tool for lapping up ants and termites. I admit to feeling an ‘uh-oh’ moment before one of our walks when I was holding him at eye level and he turned and looked at me with silent intensity – his mouth inches from my face. Thankfully, he didn’t find anything of interest there. 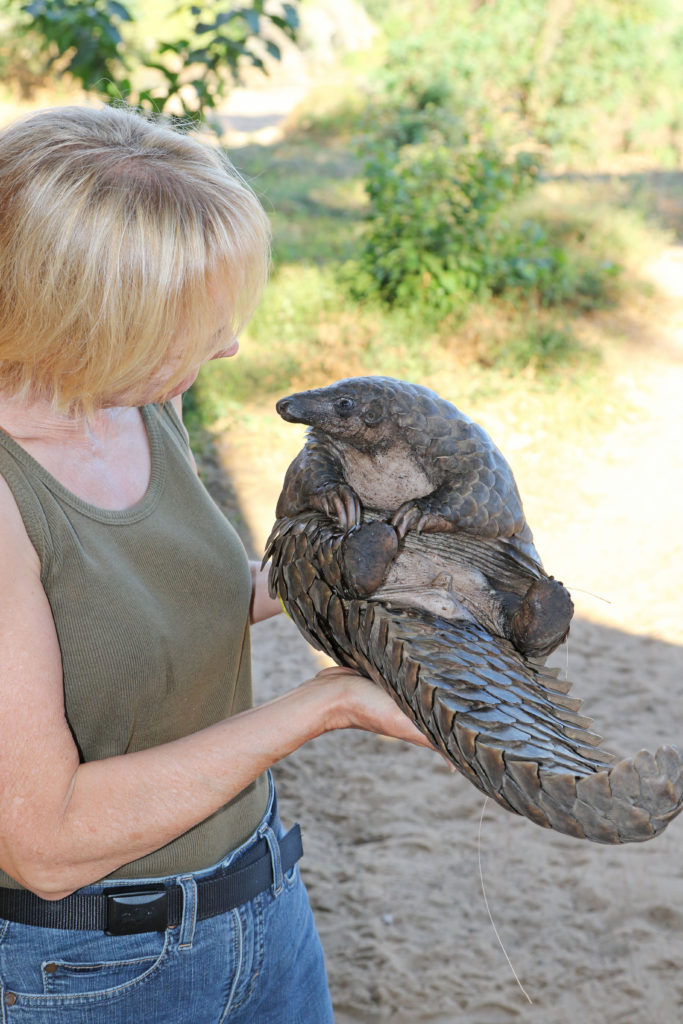 Pea’s forefeet have three long, curved, claws to open nests of ants and termites and dig sleeping burrows. As for his hind-feet, I can’t help but think of elephant feet when I look at them. In the video, you’ll see how fast he can move when he raises his tail and forefeet off the ground while balancing most of his weight over his hind-feet. Pea can disappear in the grasses in a hurry when he wants to. We laughed when we saw him roll over in a somersault while wrestling with a piece of ant’s nest, but it shows you how vulnerable his underbelly is. If frightened or threatened, Pea’s main defense is to roll up in a ball. While the armor-like exterior scales help protect him from predators, he is powerless against poachers who could simply pick him up and drop him in a bag. 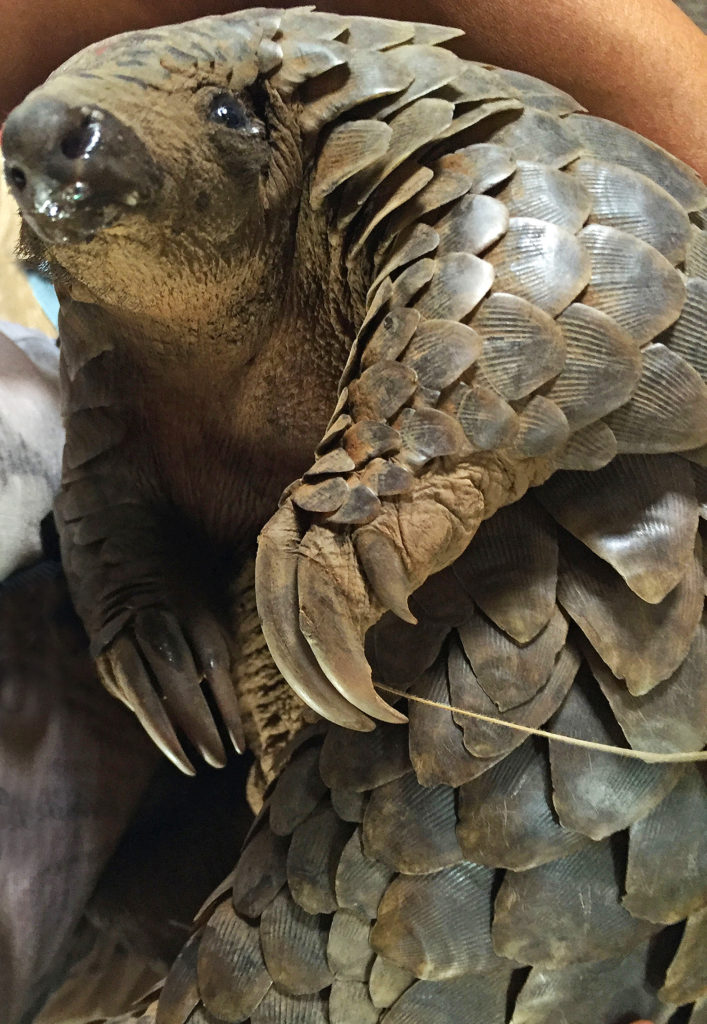 I shared our story of Pea with Dr. Goodall who has spoken to the world on behalf of Pangolins. She reminds us there is hope as long as people care and take action on behalf of all living things. Pangolins have now gained the highest level of protection under the Convention on International Trade in Endangered Species (CITES). This is an important step, but it has to be enforced if the poaching crisis is to stop. Our voices and the choices we make each day will help stop the demand, the killing, and the trafficking. 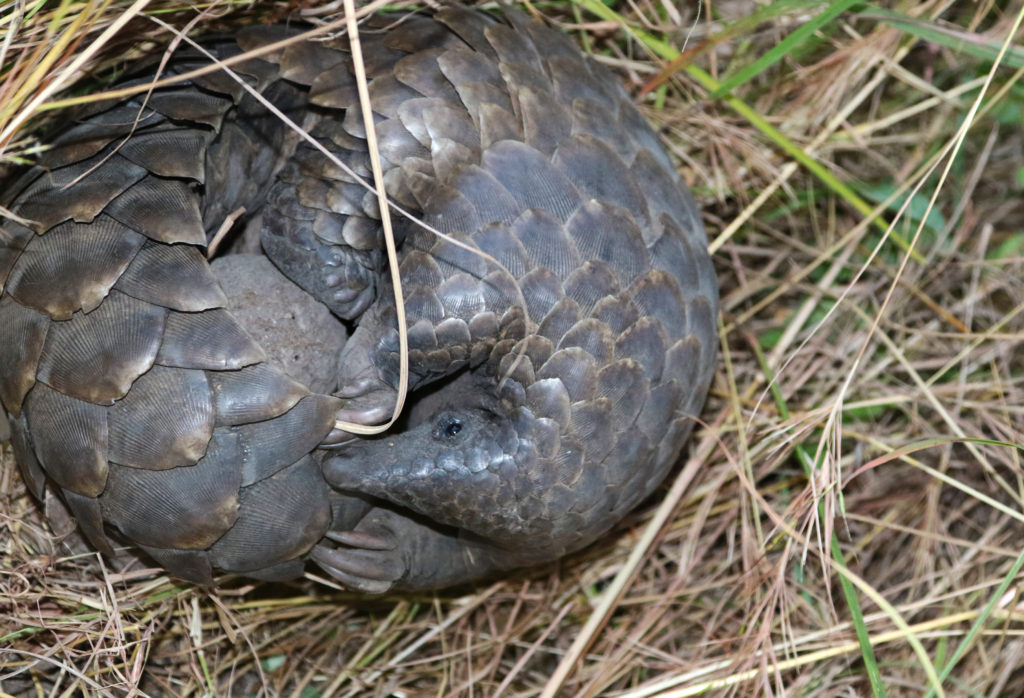 Pea is now living on his own in the wild. He is counting on all of us to keep him safe

Specializing in Wildlife and Tribal Portrait Art, Becci's desire to study her subjects in their natural world has lead to adventurous travel across 6 continents and over 43 countries around the world including Antarctica, The Amazon, China, India, Nepal, Thailand, Borneo, Tanzania, Botswana, Zimbabwe, The Congo and Namibia among many others. Wanting to live and work as close to nature as possible, Becci's home studio in Western Washington has been designated by the National Wildlife Federation as a Certified Backyard Wildlife Habitat. A strong advocate for wildlife conservation and the preservation of world cultures, Becci presents programs on her travel, art, and wildlife experiences from around the world. Becci's programs, enhanced by video and photos, engage and entertain audiences of all ages.