You are at:Home»Conservation»The Beauty and Perseverance of Biodiversity

Today, on International Day of Biodiversity, I reflect on the fact that we are experiencing the 6th great extinction; the first great extinction attributed directly to human actions.

I have spent many, many days in the rain forests of Gombe National Park in Tanzania, and enjoyed opportunities to visit forests in other countries as well – in Africa, Asia, Latin America and the United States.  I have sensed a great spiritual power in these forests, and came to understand so clearly how everything is interconnected. Each species of plant and animal has its own part to play in the great tapestry of life. Whole ecosystems may be damaged as the loss of one species, even if it may seem insignificant, may nevertheless affect the survival of another – and so on.

But it is not only in the rainforest that we are losing species, some of which may have taken millions of years to evolve. Indeed, there is a great deal of doom and gloom among those of us who care, and care passionately, about the environment and the other living beings around us.

How fortunate that there are people and organizations fighting to save species (including the organization I founded, the Jane Goodall Institute). This was the theme of both Hope for Animal and Their World and Seeds of Hope. Both these books were very inspiring to write as I was able to meet some of the heroes whose efforts have given many species of animals and plants another chance.

One of the species I wrote about was the Arabian oryx. Today, however, one I want to bring to your attention is the scimitar horned oryx. A species that became extinct in the wild that has, thanks to the efforts of the Environmental Agency of Abu Dhabi and various captive breeding efforts around the world, been returned to its native habitat in the dry and arid landscape of Chad.

I learned about this project from my friends in Abu Dhabi, Dr. Frederic Launay and James Duthrie. Through them, I was actually able to meet some individual oryx involved in the breeding program, which has been organized by a coalition of The Environment Agency Abu Dhabi, the Government of Chad, The Sahara Conservation Fund, Smithsonian Biology Institute and Zoological Society of London.

The really exciting information has been shared with us by James, and I am really grateful to him for such a wonderful and hopeful story for Biodiversity Day. Last, but not least, I’d like to thank Mohamed Suhaj Koppath, who shared these wonderful photos with us.

A beacon of hope for the global conservation community. 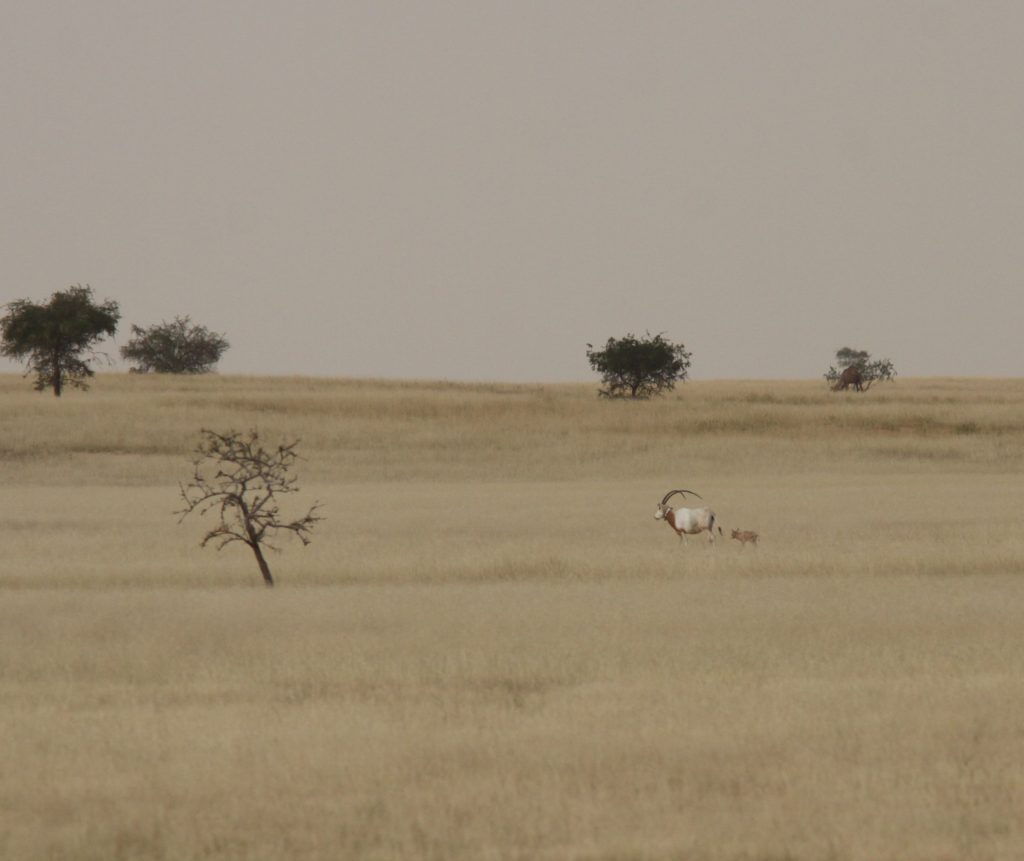 Under a dusty bush in thick shade, sheltering from the 45 degree heat and harsh sun in the Sahelian landscape of Chad, lies a beacon of hope for the global conservation community – another newborn scimitar horned oryx calf.

This latest addition to a growing herd of scimitar horned oryx in Chad is the result of what is arguably the world’s most ambitious mammalian reintroduction program ever. The Environment Agency-Abu Dhabi have partnered with the Government of Chad, Ministry of the Environment and Fisheries and the Sahara Conservation Fund to plan and execute this program.

Inspired by the vision of the late Sheikh Zayed bin Sultan All Nahyan, founder of the United Arab Emirates, the goal of the project team is to restore this magnificent extinct-in-the-wild species to its former range in the Oudi Rime Oudi Achim game reserve in Chad. With the support of zoos and private collectors from across the world, EAD have curated a genetically diverse population to contribute to its “world herd” of over 3,000 Individuals in its breeding facility in Abu Dhabi. Genetic modelling has shown that to give the species a really good chance of survival we need to aim for a genetically robust adult population of some 500 individuals in the wild. The end goal is to see the species down-listed from “Extinct in the Wild” on the IUCN red list. 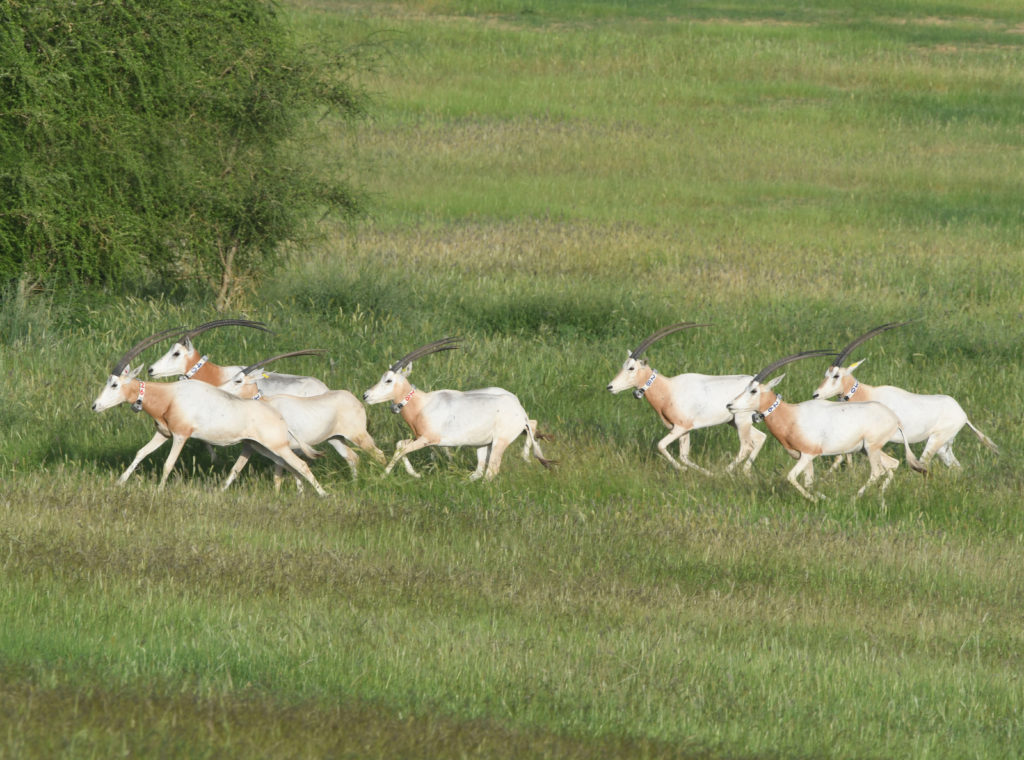 A monitoring team from the Sahara Conservation Fund scans for a herd of oryx. (Credit: Ahmed Abdulla Al Dhaheri)

The reintroduced animals are being carefully monitored via satellite collars and an on-the ground monitoring team from the project partners.

While the progress of the project will be well documented in the media and in scientific journals to inform future reintroduction efforts, what is difficult to quantify, but immensely gratifying, is the profound effect that this initiative has had and will continue to have on the people it touches:

I was awestruck when I was briefed on the project by the head of ex-situ conservation at the Abu Dhabi Environment Agency – it was clear that this is something special in terms of its magnitude, ambition, global involvement and the effect that it could have on communities and habitats that may have been unknown or under-represented in conservation efforts to date.

Shortly afterwards I found myself briefing a film crew on the project –  they moved from a position of apathy to highly emotional and begging to be involved in no time at all. 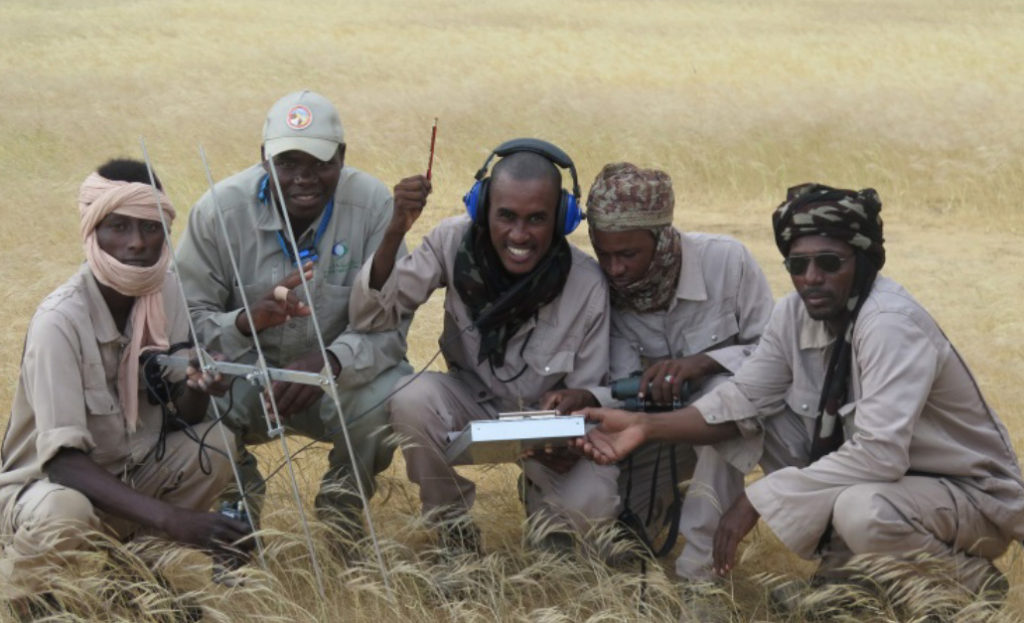 The basecamp monitoring team in the field. (Credit: Tim Wacher)

Such strong emotions have become the hallmark of the project at every juncture: The wistful looks of a keeper at a British zoo at 5 am on a cold winter’s day; mixed emotions of loss, hope and pride as her beloved charges were being loaded into crates for their journey to the UAE to join the world herd.

I am often met with a slightly quizzical look when briefing media and others on the project. The question they want to ask is “But where is the ROI (Return on Investment) for the UAE?”  When I point out that there is no ROI, just a ROE (Return On Environment) the penny drops.

There exists obvious pent-up excitement in the eyes of government officials, rangers and guardians-to-be as we shared images and training materials on scimitar horned oryx prior to their arrival in Chad.

There is clear nostalgia, and more importantly hope among the old nomadic herders whom we met that recalled the days when there were oryx in the Sahelian grasslands in relative abundance; the oryx providing an invaluable compass to where the rains had fallen with their ability to detect rainfall from up to 100 kms. 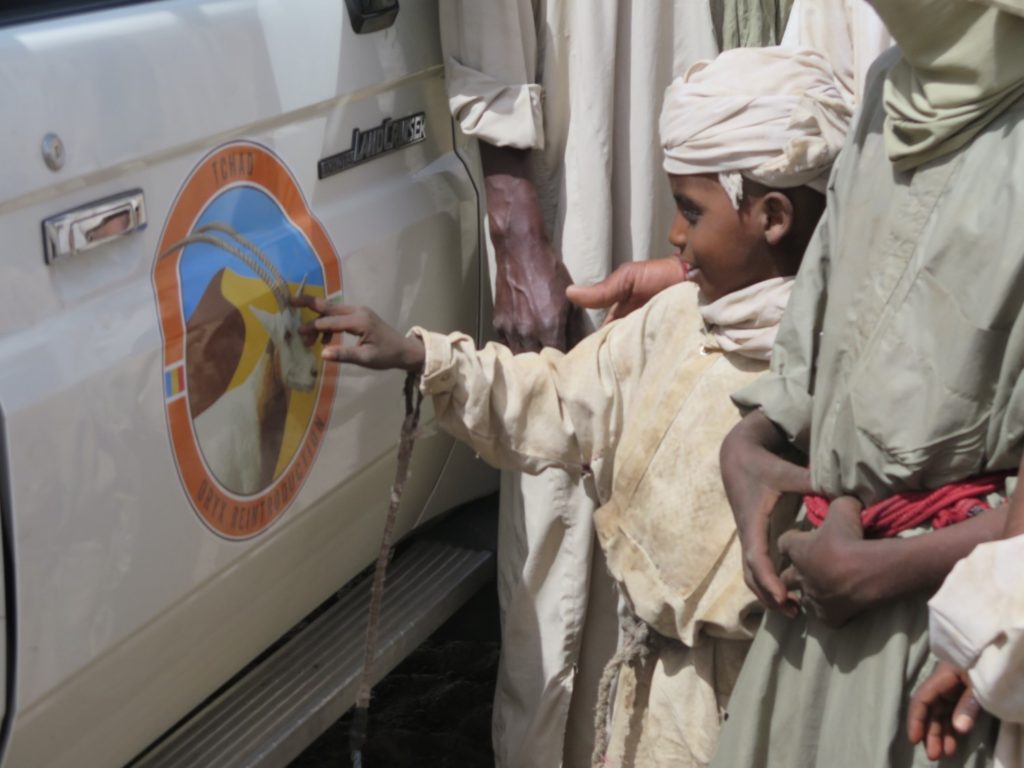 Wonderment among children of herders pointing enthusiastically at the decals of the mythical creature on our land cruisers. (Credit: John Newby)

An ecologist and conservationist expresses sadness, excitement, and determination in his campfire tales, as he spent many years following oryx across Chad on camel-back and lying belly-down in watering holes. He and a number of sentinel bucks observed the herds and is now dedicating much of his time in Chad contributing to their return.

I recall standing on the hardpan at Abeche airport at 4 am awaiting the arrival of our first shipment of scimitar horned oryx wondering how we were going to manage to unload 25 crates of animals, a vehicle and a significant quantity of supplementary feed with virtually no equipment, in a sandstorm. Out of the darkness emerged a contingent of French soldiers who had heard about the project and just showed up to help. Our first 25 oryx were tenderly and efficiently lifted and loaded by a very tough, very willing, compassionate band of volunteers who are now undoubtedly following the project progress on Facebook.

There was a tear rolling down the cheek of a veteran conservationist from the United States as he saw the fruits of a plan hatched long ago come into being, with the first hooves on the ground in Chad thundering away from us. 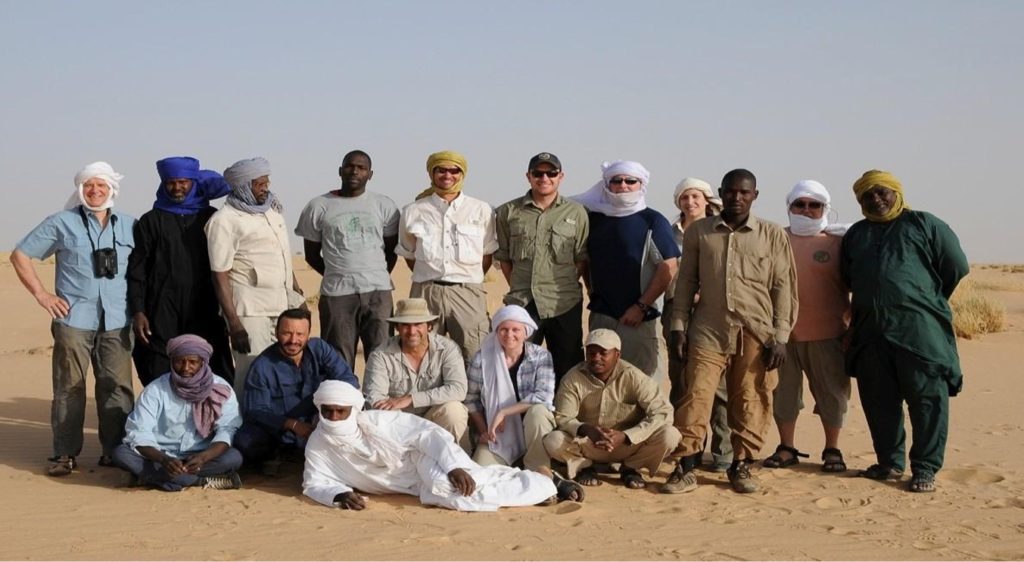 Such a difficult task would not be possible without the collaboration of our amazing team. (Credit: John Newby)

There have been many tears of joy, and I have no doubt that there will be tears of sorrow in the future. For now, if we can capture and share some of the optimism and joy that this project is bringing, I hope it will be an inspiration for conservationists and others who care about the plight of our species and share the belief that restoration is not beyond our grasp.