As human population and development continue to rise around chimpanzee habitat, both humans and wildlife suffer. As populations grow without proper land-use plans (how areas of their communities will be designated for things like agriculture, housing, etc.), forests are destroyed and human-wildlife conflict increases dramatically. Clearing forests for the purpose of agricultural use, as well as logging for firewood and other needs, has resulted in not only ecosystem loss, but something known as forest fragments. These fragments are a major threat to wildlife – but what are they and why does it matter?

Why are forest fragments harmful?

Forest fragments are small pieces of what were formerly connected ecosystems. It’s a global problem and it’s only getting worse. When these areas are cut off and isolated between human settlements and agricultural plots, wildlife are limited to the resources of those small areas and disconnected from other populations across their range. Forest fragmentation also increases the likelihood of human-wildlife conflict, both in wildlife encroaching on agricultural crops and humans intruding on forests. Across the chimpanzee range, which spans from West Africa across the Congo Basin, suitable chimpanzee habitat has been broken into fragments which has serious consequences for their survival.

What implications do forest fragments have for chimpanzees?

Across the chimpanzee range, deforestation has contributed to increased habitat fragmentation, posing as the primary threat to chimpanzee survival. According to a 2016 studyby Maureen McCarthy, key threats to great ape survival included habitat loss, hunting and disease, in that order. Habitat loss creates disadvantageous changes in chimpanzee behavior, dispersal patterns, diet and social interactions. Being restricted to these forest fragments increases the potential risk of decreased genetic variability (genetic differences) in the chimpanzee population and could ultimately result in local extinctions. It also increases the prevalence of zoonotic disease as humans and chimpanzees come into closer and closer contact. Human-wildlife disease transmission is responsible for millions of deaths each year, even from a very small amount of specific pathogens.

Why do we have to act now?

Deforestation rates are increasing. In a 2018 Independent article researchers found that primate dense areas are often characterized by high levels of human poverty and weak governance. These social factors drive habitat degradation because of the over-exploitation of resources. As human populations grow unsustainably, forest fragmentation will only increase.

Despite the notion that chimpanzees are potentially resilient when faced with anthropogenic (caused by humans) changes to the environment, conservation of these forests must be recognized as vital to the shared future of both humans and chimpanzees. Chimpanzees are endangered – from a total population of over one million under 100 years ago, only 340,000 remain in the wild.  According to a 2015 study, the majority of chimpanzees in West Africa, up to 81 percent, live in unprotected forest fragments. This statistic is only one representation of the same situation across the entire chimpanzee range in Africa. 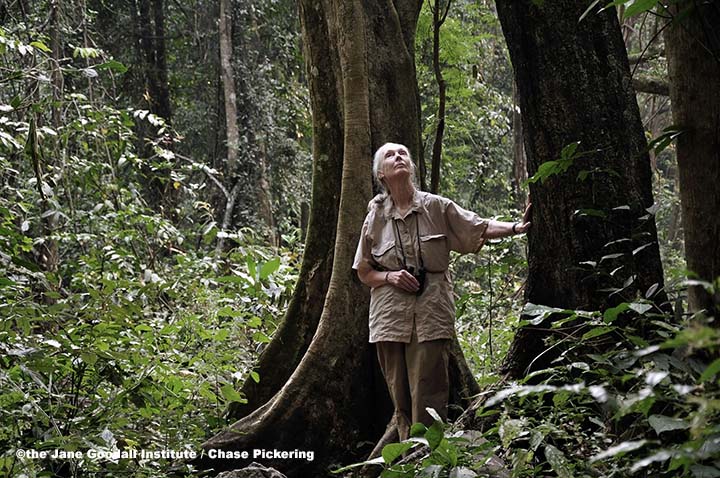 What is being done to help?

The best way to protect healthy habitats is to focus on actions that not only protect endangered animals and their habitats, but also benefit the local people whose lives depend on a healthy environment.

By implementing sustainable livelihoods support, tools and knowledge for things like agroforestry, bee-keeping, sustainable coffee business and more, communities are reducing their need to put pressure on local ecosystems. GIS mapping, community mapping and forest management enable people to take control of their resources and forests, while JGI is able to identify important chimpanzee habitat so that forests and wildlife are protected while communities can thrive. As a result, community members are able to have increased access to economic, environmental and social benefits.

In addition to these programs, to enable wildlife populations access beyond forest fragments, local trees can be planted that serve as a “bridge” between the forest fragments inhabited by the chimpanzees, and the larger land mass they were separated from. This bridge of forest becomes known as a chimp corridor and provides safe passageway for the chimps to other forested areas, not to mention other important wildlife species. Using these chimp corridors allows the chimpanzees to continue to hunt, socialize and sustain themselves.

Though forest fragments continue to threaten wildlife, there are hopeful solutions. Using this holistic approach, local people take ownership in their own communities to improve outcomes, while protecting ecosystems and their natural resources. As an added benefit, dealing with forest fragments also helps restores forest – a great, yet forgotten solution to climate change. Find out what else the Jane Goodall Institute is doing to mitigate climate change and revert deforestation!

Shelby Dye is the Community Engagement Associate at the Jane Goodall Institute for Roots & Shoots, where she works to connect young people to Dr. Jane Goodall's vision and the JGI mission. Shelby graduated from the University of Arkansas with a B.A. in Physical Anthropology and a B.A. in Journalism with a focus on advertising and public relations. Shelby is experienced in influencer marketing and public relations for non-profits. When she's not busy exploring the wonderful world of media, she likes learning new dance moves and reciting Disney movies word-for-word.