You are at:Home»Conservation»Extent of Giant Peat Swamp Recently Discovered… Wait, What is a Peat Swamp?

In the Congo Basin of Central Africa, researchers have located a previously unknown peatland larger than New York State.  This discovery highlights the importance of peatlands to the health of the global environment.

What are Peat Swamps?

Peat swamps are areas where the soil is so full with water that dead leaves and other types of organic matter are unable to completely decompose.  This peat accumulates over time, and soon vast areas contain tons of carbon (the main component of organic matter which sustains living things).  Peatlands can be present all over the world from the northern territories of Canada, Russia, and Alaska to the tropical regions of Africa and Indonesia.  In Africa, these areas of peat form swampy, forest ecosystems which are homes to all types of animals, plants, and other forms of life. 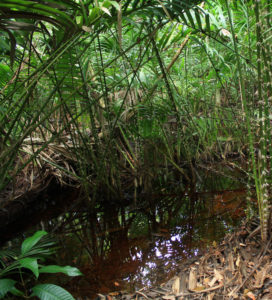 Why are They Important?

Peat contains a lot of carbon.  Not just a lot of carbon, it stores almost as much carbon as there is in the entire Earth’s atmosphere even though peat covers only about three percent of the globe’s land surface!  Commonly called “carbon sinks,” peatlands are vital in storing carbon and preventing it from being lost to the atmosphere.  Since peat prohibits organic matter from decomposing, all the carbon stays in the ground instead of being released back into the air.

University of Leeds professor, Dr. Simon Lewis, worked with a team of researchers to study wetlands near the border of the Republic of Congo and the Democratic Republic of Congo.  With the help of satellite imaging, they were able to map out the peat swamp to be about 55,000 square miles.  Reaching as far as 20 feet deep in some places, this peatland stores about 30 billion metric tons of carbon which is nearly the same amount of carbon that the United States has released from fossil fuel emissions in the last 20 years.  The difference though is in the type of carbon for the carbon in the peatlands is organic carbon versus the inorganic carbon in our fossil fuel emissions which living beings cannot use for energy.   These swampy forests in Central Africa do not only provide the benefit of storing carbon, but they also are home to the highest densities of lowland gorillas and other animals, many of which are in danger of extinction.

Why Should You Care?

If these peatlands are cleared to be used for agriculture or some other need, then all the carbon stored would be decomposed and released back into the atmosphere as inorganic carbon (CO2) that living beings cannot use for energy.  This would contribute greatly to the increasing carbon levels of our atmosphere, and this would have a magnifying effect on the problems caused by climate change. For example in Indonesia, many peatlands were drained for palm oil production.  Many times fires were used, and the carbon was immediately pumped back into the atmosphere.  Peat fires in Indonesia released more carbon into the atmosphere per day than the entire European Union during the fall of 2015.

With studies of peatlands lending more and more information about these intriguing ecosystems, it is important that we understand the importance they play in the environment, and why we need to protect them.  With global pressure putting a strain on the natural parts of Earth, we need to stay aware about the problems we face to limit the harm inflicted upon the world.  Learn, share, and stay updated because the world is an incredible place, and every day we learn more and more about it and its wonders.

Yanni is a member of JGI's Roots & Shoots U.S. National Youth Leadership Council (NYLC). As a member of the NYLC, Yanni acts as a youth voice and works to make a positive change in his community — for people, animals and the environment. While studying Environmental Science at Northeastern University in Boston, MA, Yanni is also a leader in his school's environmental education club, and he works with Speak for the Trees Boston to advocate for the city’s urban canopy. In his free time, Yanni enjoys playing with his dog, Kimi, a Cavalier King Charles Spaniel.