You are at:Home»Primates»JGI Jungle Journals: Notes from Gombe, Tanzania Part I

Dr. Jane Goodall had a single dream: to study wildlife in Africa. When she was 26 years old, she was given an opportunity, by a innovative scientist named Louis Leakey, to achieve this dream in a place called Gombe. Gombe, Tanzania, has since Dr. Goodall’s studies been the home of ongoing behavioral, biological, and other research on wild chimpanzees (Learn more about Gombe here). Many exceptional minds have passed through Gombe, providing their own imprint on this significant location, leaving with a reshaped imagination.

There is never a bad time to follow chimps; even seemingly miserable weather can deliver some of the most memorable, tender behavior. I found the group scattered in the vegetation on the slope between upper Linda and Kasakela Valleys. My mission is to find Golden, Gremlin, and Gaia and attempt to get some images of Gombe’s latest babies. I am very excited because Golden’s baby is just over a month old and I have not yet seen it. I spent some time with Gremlin and Gaia and their babies last year and I am looking forward to seeing them again. 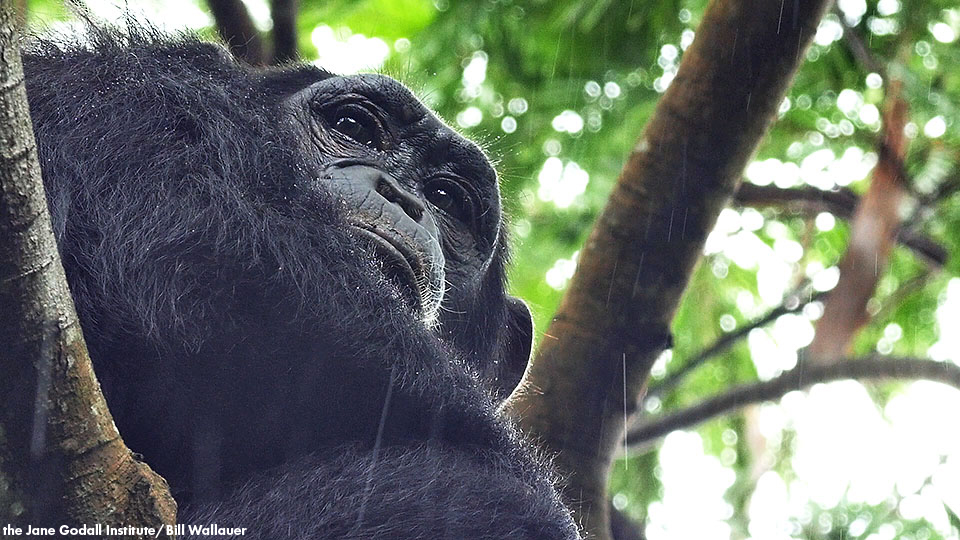 It rained on and off during my walk up Plumb Tree Thicket from camp and throughout the time I spent with the chimps. When I arrived, I found several JGI field assistants with the group and they said that they had seen nearly everyone in the community. That is good news for the most part, but the area was incredibly thick and the landolphia fruit the chimps are eating at the moment forms enormous tangles of vines, making identification a real challenge.

During a rain storm, the chimps often climb into tall trees and hunch over against the wind and rain. After failing to see any faces among the five or six dark shapes in the branches above me, I decided to make a few circles to find a more interesting view.  En route I spotted Sheldon, who was resting on the ground in dense cover; it was so dark I could barely make out his face so I didn’t even pull out my camera. He watched me as I passed by as he often does – he has always been a bit wary of people, so I was careful not to disturb him. 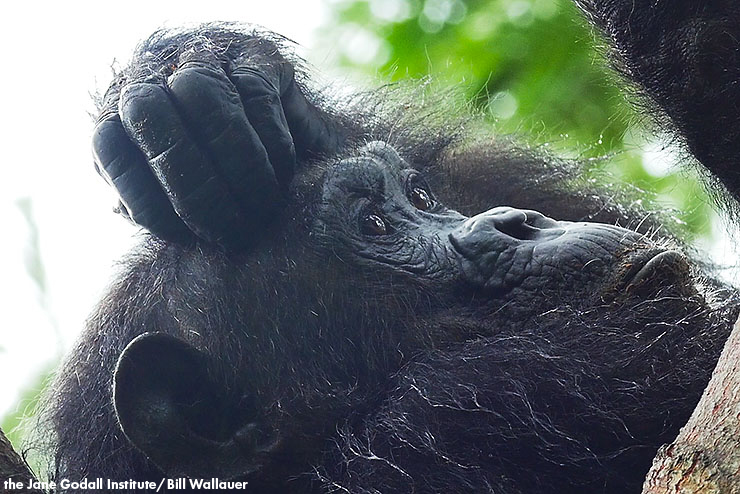 My strategy paid off. Within a few minutes, I found another group of chimps in the treetops, again doing their best to shelter against the rain. As I tried to figure out who was there, Nasa and Gremlin passed behind me and climbed into the same tree. I’m sure I had a huge grin on my face when I saw Gremlin. I have known her for 25 years and have probably spent more time with her recording her behavior than any other chimp in Gombe. She looked good, as did her son Grendel, who seems to be a perpetual motion machine.

Above me and to the left, I spotted a small light face snuggled into the long hair of a Gaia sized female, and above here a very G looking four or five year old. Could it be Google, Gaia’s son? I tried to dry out my binoculars but my attempts were futile so I decided to pull out the umbrella and throw the long lens on; both to try to find out who I was looking at and to get some shots of chimps in the rain (as I write this I realize that this strategy doesn’t sound very smart, but I’ve been doing this a long time and have learned to keep my equipment safe even in a tropical downpour). It also helped to have the wonderful assistance of Idi, my friend and TANAPA guide. 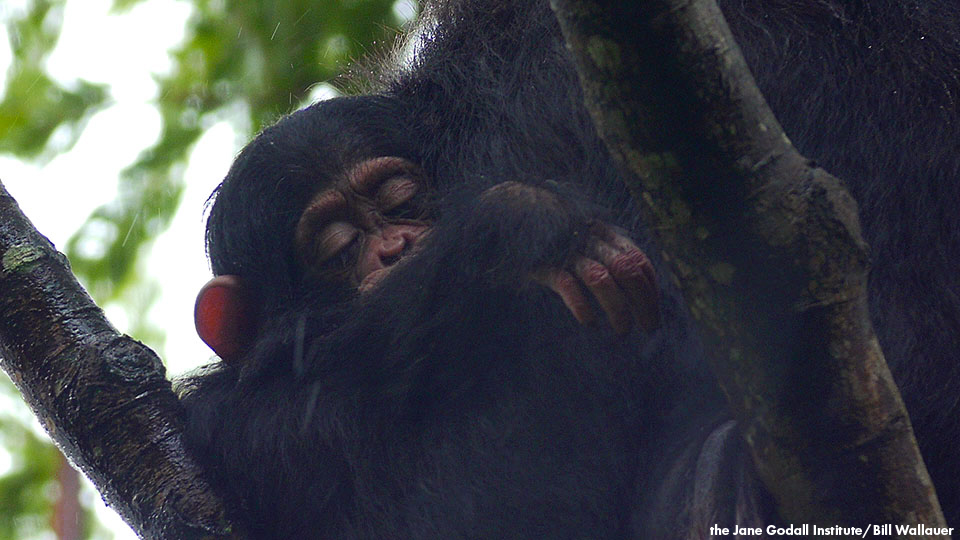 Though I still know well the older generations of chimps, identifying the young chimps and transfer females is a challenge since I no longer live in Gombe. Through my big lens, I was able to see a clear-ish image of the four or five year old and I was pretty sure it was Google. The female was sitting with her back to me must be Gaia. I occasionally got a view of who I hoped was Gabo, Gaia’s latest infant. 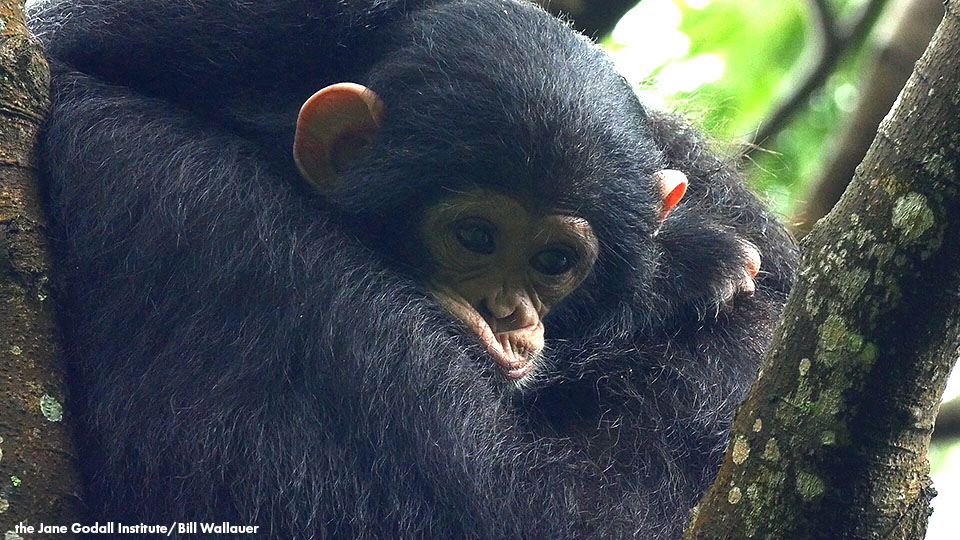 I finally got a profile view of the female.  I let out a deep sigh of contentment; it was indeed Gaia.  And that was the last I saw of her! While I was looked down to make sure my lens were clean and dry, Gaia climbed higher and out of view. Fortunately another female and infant took her place on an open branch. Imani sat just as Gaia had, with her 6 month old daughter Iracoze snuggling into her long wet hair. She was able to sleep for some time, but then would wake up and stare down with his face smushed against his mother’s arm. I don’t know these two well, but it was fun to get to watch Imani cuddle and groom Iracoze. Imani transferred into the community several years ago and now has two offspring. Though I was sad not to get a longer view of Gaia and Gabo, the light was very challenging for shooting and I doubt the group will go far tomorrow, so I get to try again. Maybe I will even get to see Golden’s brand new baby!

Stay tuned for more from Bill’s journey to Gombe, and support our primate research at JGI here.