You are at:Home»Conservation»Jane Goodall on Forests #2: Lessons on Appreciation and Protection

Editor’s note: In honor of International Day of Forests on March 21, Dr. Jane Goodall, having spent so much of her life living in the forests of Gombe Stream National Park, and has in her life experienced so many other forests around our planet shares some of her thoughts on appreciating forests and working together to protect them in this series of blog posts drawn from Seeds of Hope: Wisdom and Wonder from the World of Plants. Throughout the week around International Day of Forests we will release more posts that are a part of this series. Stay tuned.

Of course there are many different kinds of forests – tropical, temperate, boreal, montane and cloud forests, and within each category, many different types. There are the riverine forests, belts of dark green that snake across the country, following the rivers, such as those I know in Tanzania, Uganda and Burundi. In these forests, as mentioned, the undergrowth tends to be dense and tangled making it difficult for us bipedal apes to move about.

Then there are those that I call the “secret forests” in the western coastal area of Congo-Brazzaville: one moment you are walking across a flat flood plain, tall grass and stunted trees. And then suddenly you come to the edge of a very steep narrow gorge. At the bottom tall trees grow, their canopies barely showing above the gorge, and when you climb down, you are in a completely different atmosphere, cool and dim after the burning sun. 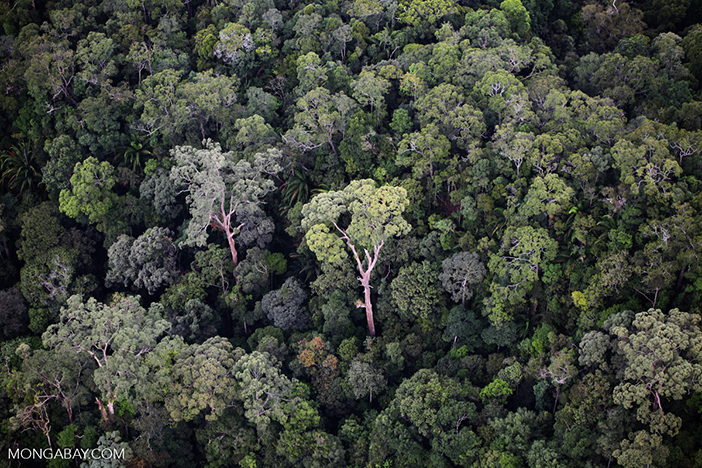 Primary rainforest in Imbak Canyon in the state of Sabah, Malaysian Borneo. The forest is home to pygmy elephants, clouded leopard, orangutans, banteng, and proboscis monkeys among thousands of other species. Photo by: Rhett A. Butler. Source

And there are the great forests of the Congo Basin, the Amazon and the wild forests of Asia, some still unexplored, that are home to a staggering variety of different species of plants and animals. Because the canopy is high and dense much of the forest floor is deprived of light and the undergrowth is sparse. In this dim world many seeds have germinated, but what looks like a seedling because it is only 4 inches high may, in fact, be 50 years old! It is patiently waiting, hoping to avoid being trampled or eaten, for a big tree to fall thus creating a gap in the canopy, letting some sunlight fall to the ground. Only then can it start to grow up towards the sky.

I have been lucky enough to glimpse life in the treetops from three different canopy walkways — in Panama, Ghana and a dry forest in America. It is a whole new world up there, populated by countless creatures that know no other existence, that come into being, live and die in the treetops. It is a world created by those trees and other plants that have succeeded in their desperate struggle to escape from the eternal gloom of the forest floor and managed to reach the life-giving sunlight high above.

Forests, especially tropical forests, are home to a great wealth of diverse animal and plant species. For example, in the forest of the Congo Basin, the world’s second-largest tropical rainforest, there are more than 10,000 species of plants, 1,000 species of birds, and 400 species of mammals, including three of the world’s four species of great apes. And then there are the reptiles, amphibians, and hundreds of thousands of insects. Most of the species in the Congo Basin do not exist anywhere else on earth. The situation is similar in the Amazon Basin, the great rainforests of Asia and the boreal forests of the Northern Hemisphere.

It is shocking to realize that the destruction of these habitats, as human populations grow, and as the chainsaws move into one area after another, is leading to the local or total extinction of species every day. And if we are to ensure the health and long-term survival of the forest ecosystem we must prevent this loss of biodiversity. We are only just beginning to understand this, but we do know that when the balance of the whole complex mix of animal and plant species is upset things tend to go wrong. Thus in Africa and Southeast Asia the great apes and other primates — along with many other mammals and birds — play a very important role in dispersing seeds — there are fewer seedlings in forests where there has been a lot of hunting.

Stay tuned for more lessons on appreciating and protecting forests in this Jane Goodall’s All Good News series of posts for International Day of Forests.