You are at:Home»Jane Says»Jane Goodall on Forests: Lessons on Appreciation and Protection

Editor’s note: In honor of International Day of Forests on March 21, Dr. Jane Goodall, having spent so much of her life living in the forests of Gombe Stream National Park, and has in her life experienced so many other forests around our planet shares some of her thoughts on appreciating forests and working together to protect them in this series of blog posts. Throughout the week around International Day of Forests we will release more posts that are a part of this series. Stay tuned.

I have always loved the forest, but it was not until I actually lived in the forests of Gombe that I came to realize, in the most vivid way, that the forest is a living, breathing entity of intertwining, interdependent life forms. It is perfect … complete … a powerful presence, so much more – so very much more – than the sum of its parts.

Much of what I have written below has been edited from parts of chapters from my last book Seeds of Hope: Wisdom and Wonder from the World of Plants.

The Forest of Gombe

Gombe Stream National Park is small – only 35 sq km. It lies on the eastern shore of Lake Tanganyika and comprises a narrow strip of country rising from the lake (2,500 feet above sea level) to a height of around 5,000 feet at the top of the Rift escarpment. The lower slopes are covered with deciduous woodlands intersected by narrow ravines – we call them karongos – supporting dense tangles of riverine forest that are difficult to move through – even when crawling along trails used by baboons, chimpanzees or bushpigs. (When I first arrived there were some slightly easier trails, made by the buffalo who are long since gone – hunted when they left the park to feed on the new grass after the rains). In the rich fertile soil of the lower valley’s giant forest trees have found a foothold, and here, where the canopy overhead inhibits the undergrowth, it is possible to make use of our bipedal posture! The upper slopes, often very steep and treacherous, are covered by open woodland interspersed with stretches of grassland. Here the trees are mostly small and, at the highest places, sometimes festooned with lichens that hang like beards from the branches. 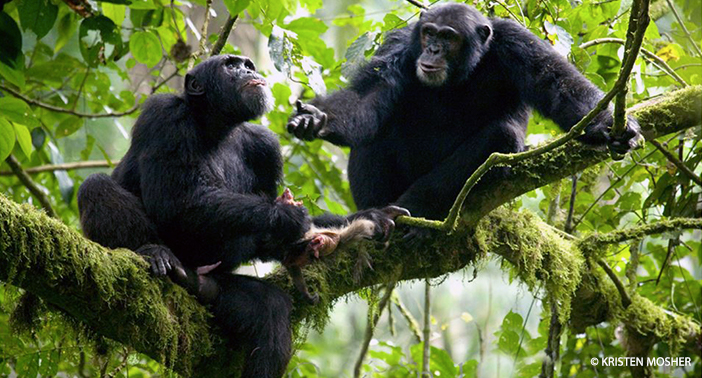 Deep in the forest I love to lie on my back and gaze up at the canopy where little specks of captured sky twinkle like stars as the wind stirs the branches and leaves overhead. All around are the voices of the forest – the soft rustling of small creatures going about their business, the buzzing and whirring of insect flight, the shrilling of the cicadas, the calls of birds, the distant bark of a male baboon, the pant hoots of a group of chimpanzees – and all the other sounds that are as familiar to the forest dweller as the revving of engines, hooting of horns, and blaring of car radios are to those who live in the city. Then there are times when it is raining and I can sit and listen to the pattering of the drops on the leaves and feel utterly enclosed in a dim twilight world of greens and browns and soft grey air.

Stay tuned for more lessons on appreciating and protecting forests in this Jane Goodall’s All Good News series of posts for International Day of Forests.