You are at:Home»Conservation»World Frog Day: A Story About Saving One of the World’s Rarest

In 2008, the Year of the Frog, I was appointed by the International Union for Conservation of Nature (IUCN) as International Ambassador for the Frog simply, to draw attention to the threats faced by frogs and other amphibians around the globe (from a fatal skin disease caused by a kind of chytrid fungus, habitat destruction and global warming).

Of course, a frog was produced to meet me during a press conference at the Wellington Zoo (pictured above). This Australian Green frog (Litoria caerulea) is also known as White’s Tree frog and the Dumpy Tree Frog! It was brought out for publicity photos during my New Zealand visit.

I have always loved frogs and toads – a love probably triggered by Jeremy Fisher, the frog immortalized by Beatrix Potter, and Mr. Toad of The Wind in the Willows fame. The only frog with whom I had regular contact, however, was Mr. Jackson – a cement garden ornament who has always lived in the garden at the Birches, my childhood home, beside the bird bath. 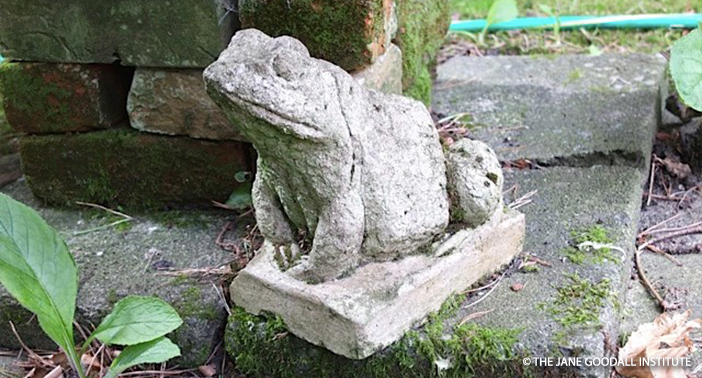 It was during that Year of the Frog that I met another Ambassador for the Frog, Dr. Phil Bishop. But while I was simply chosen to be an ambassador more or less for publicity purposes, Phil was the real thing. He was passionate about frogs from his childhood. His doctoral thesis was on acoustical communication in amphibians in South Africa, and he is currently Professor in the Department of Zoology in Otago University, New Zealand. As a result of our meeting, Phil offered to help found JGI-New Zealand and start a Roots & Shoots group. On my next visit to his country I was invited to Otago University and in addition to giving a lecture, was able to visit Phil and his frogs, and his team of frog enthusiasts. 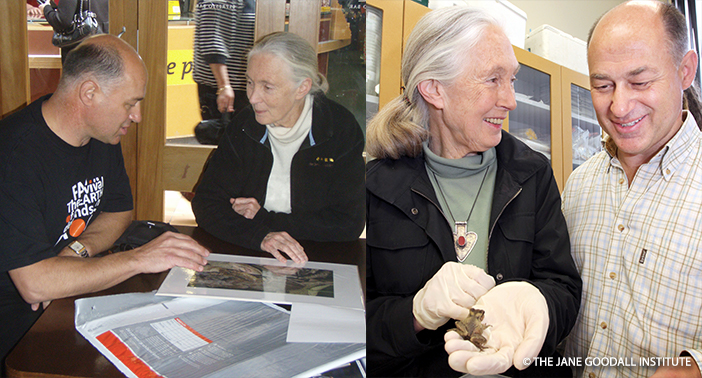 I got to hold some of New Zealand’s very special frogs – this is Maud Island Frog (Leiopelma pakeka), a very close relative of Hamilton’s.

It was during that visit that Phil told me about the endangered Hamilton’s frog, one of the rarest and most ancient frogs in the world. It is tiny, the male being only about 45 mm, and the female only very slightly bigger – yet it is New Zealand’s largest native frog! Hamilton’s are ground-dwelling species and during the day hide in tiny crevices in the rocks, which is where the females lay their eggs. While the tadpoles are developing – inside the eggs – the father stays close by guarding them. When the tiny froglets emerge, he carries them around on his back.

There was a time, long, long ago, when frogs of this group (the Leiopelma frogs) had tails that they could wag. And today they still have the muscles, even though they have no tails to wag! If you are not smiling, at the idea of a frog wagging its tail – well, then you have no sense of humor! (If you want to know more about the tails of those prehistoric ancestors, you can Google ‘caudalipuboischiotibialis muscles’ – the proper scientific name!)

The modern Leiopelma frogs also have long shaped bits of cartilage in the muscles of their abdomens (look up ‘inscriptional ribs’ if you want to know more!), round pupils and more vertebrae than most other frogs except their relatives, the tailed frogs found in USA and Canada.

I have to admit, I had not heard of tailed frogs before. I wanted to see a picture, and as you may also, here is what they look like:

A male tailed frog – the females do not have tails. [picture from Wikipedia Tailed Frogs]

But perhaps the most unusual characteristic of this group of almost prehistoric frogs is that they cannot croak. Hard to imagine a frog that cannot croak. The reason, Phil explained, is because they have no vocal sacs. Nor do they possess eardrums. “So do they make any sounds?” I asked. “A thin high-pitched squeak,” said Phil.

It was because most New Zealand frogs are more or less silent that Phil was first attracted to the country. How could they find their mates without sound, he wondered? Eventually he found the answer – they communicate by releasing chemicals and scents. “These frogs, along with the tailed frogs,” Phil told me, “also swim differently to other frogs – they use alternate leg kicks and this causes their heads to move from side to side in a rather energy inefficient way”. 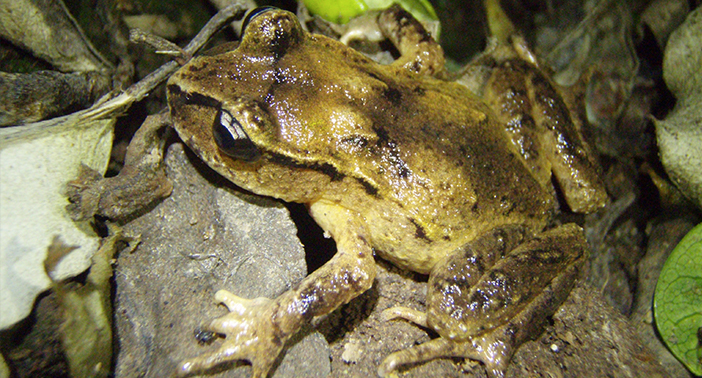 Like so many amphibians, Hamilton’s frog is having a hard time. It was originally found on both the North and South Islands of New Zealand, but as a result of habitat destruction and predation by native and introduced animals, it gradually vanished from most of its original range. By 2004 the only Hamilton’s left were concentrated in a “boulder bank” on Stephen’s Island. The size of its range – just 300 square meters. And only about 300 individuals remaining. Without efforts to protect and restore the little frog it might well be extinct by now. And it is still one of the rarest frogs in the world.

Phil was one of the co-leaders of a group of scientists committed to planning how to save Hamilton’s and other endangered frogs (the New Zealand Native Frog Recovery Group). After monitoring the tiny population it seemed that numbers of Hamilton’s in its tiny range were stable from year to year, but the habitat was not big enough for expansion.

Obviously there was a need to establish a second group, and Phil and his team chose one of the small islands named Nukuwaiata. “We had to prepare the place for the frogs” said Phil. “We built some rock banks and installed a boardwalk over them so that researchers could monitor the population without risking stepping on the frogs or stepping on rocks that could move and accidentally squash a frog below.”

Next they worked out how many frogs they could remove without harming the original population, whilst giving the second population a good chance of becoming self-sufficient. Of course there was controversy – many people felt the original Stephens Island population might suffer and should be left alone – that all the eggs should be kept in one basket as it were.

“But we went ahead anyway” said Phil, “because we were fairly confident of our mathematical model – based on analyzing the years of monitoring the one existing population. And so, over a two year period (2004 to 2006) they moved 80 frogs to Nukuwaiata.

Since then, both populations have been monitored. By 2008, Phil was able to tell me the good news: “there appears to be no significant impact to the source population” he wrote “and this year, in June, we discovered the first baby frogs on Nukuwaiata”. And he went on to say “we have achieved a milestone as they have been successful in reproducing in their new environment and all of a sudden we have our ‘eggs’ in two baskets, thereby significantly decreasing the risk posed to our single population of the World’s Rarest Frog!”

Since 2008, the surveys have been continued on both populations. The most recent, conducted in 2015 by one of Phil’s doctoral students, Sally Wren, has even better news. The original population on Stephen’s Island, despite the dire forebodings of the nay-sayers, is recovering well from losing the 80 individuals selected for translocation. The number of frogs appears to be increasing, and there are still many subadults among the individuals captured. There was one special frog for Sally: “The ‘frog of the trip’ for me” she wrote, “was the one we found which was first captured as an adult on Stephens Island in 1990, so he must be coming up to 30 years old, if not older!”

And Phil told me, that day in the lab, that “scientists recently found a female who was banded as an adult 35 years ago! It just shows how important long term monitoring is in our business”. I think most people don’t realize that little creatures like frogs can live so long. I certainly didn’t.