You are at:Home»Primates»Lounama: Helping Her Heart Stay Strong

Lounama is one of the lucky chimpanzees living at the Jane Goodall Institute’s Tchimpounga sanctuary who was relocated to Tchibebe Island, one of Tchimpounga’s  three new island sanctuary sites. She has a calm and sociable demeanor and gets along well with many of the other chimpanzees. She is also a favorite with the staff, even having a gentle manner with her human caregivers. Lounama integrated well with the chimpanzee group that has already spent some on Tchibebe.

Despite her smooth transition, in recent months, Lounama has not been well. She has shown signs of fatigue and pro-gastric issues. The staff saw her spending a lot of time lying on the forest floor, changing positions periodically to be more comfortable. She had lost her appetite and was just too tired to play with the other chimpanzees. A behavior that was not normal for her. The caregivers grew concerned about her and informed the veterinary team, who made the decision to bring her back to the main sanctuary for closer observations and intensive diagnostic evaluation. 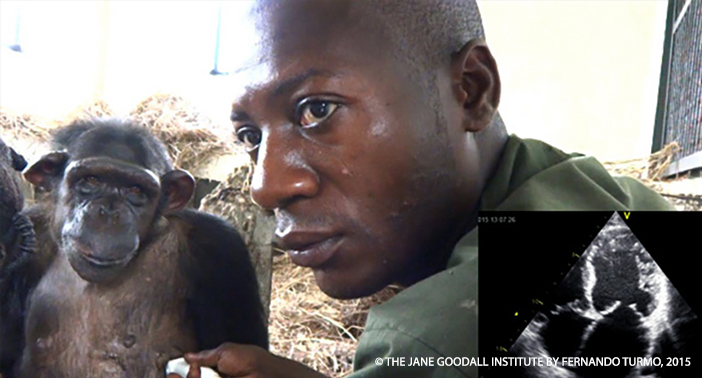 Finally, through ultrasounds and electrocardiograms (heart monitoring), the team discovered that she has a heart problem. Lounama has a faulty valve. This is causing blood to flush back into the lower chambers of her heart, causing swelling and heart failure. If something drastic was not done, she would have died. The team responded quickly and with advice from experts in the United Kingdom, and she has now been stabilized.

It was very fortunate that at the time of the Lounama’s illness, Tchimpouga was playing host to a team of experts from Cardiff Metropolitan University who are undertaking a world-wide study on great ape hearts. It was thanks to this team and their specialized equipment that the Lounama’s problem was detected, and the Tchimpounga veterinary team could get advice on a treatment.

What was most amazing about this situation was that because of the incredible relationship between Lounama and her caregivers, the staff were able to conduct the examination without any restraints. Like a human patient, Lounama sat quietly while her caregivers conducted the procedures under the careful instructions of the experts who were outside of her room. She allowed her caregivers to do the examination, giving the experts the incredible opportunity to observe on the monitors in front of them what was going on inside her heart. It was an emotional experience for everyone, even the experts from Cardiff who were amazed and overwhelmed by the experience.

This close relationship and trust between the Lounama and her caregivers allows our veterinary team to now monitor her condition effectively with life-saving equipment. The incredible importance of this trust that our local staff have built up with the chimpanzees in our care can never be underestimated. Without it, we would not be able to carry out many of the life-saving procedures we do.

Fernando Turmo is the Jane Goodall Institute’s Image and Communications Coordinator and is based at JGI's Tchimpounga Chimpanzee Rehabilitation Center in the Republic of Congo. After working as an illustrator and designer in his home country of Spain, Fernando joined JGI in 2006 and became the resident photographer and videographer at Tchimpounga. Fernando loves bringing the stories of Tchimpounga’s chimpanzees to life through photos and video for all of JGI’s supporters. One of Fernando’s favorite moments that he captured on film was the chimpanzee Wounda giving Dr. Jane Goodall a hug after being released onto Tchindzoulou Island.