You are at:Home»Seriously Good For All»Famous Cartoonist Pledges Support to Roots & Shoots

Starting today, individuals around the globe, can find Dan Piraro’s “Devolution” appearing on T-shirts for sale through a time-limited campaign. Proceeds from the sale of these T-shirts will benefit Jane Goodall’s Roots & Shoots. Syndicated cartoonist Dan Piraro and his artist assistant and colorist Christy Higgans are two individuals who embrace the Roots & Shoots mission that every individual can make a major impact on the world. These two impact the world constantly, with Piraro’s “Bizarro” single panel comics appearing in national newspapers every day of the year.

One cartoon has recently gone viral, attracting the attention of millions: an image of man’s evolution into the intellectual leader of the animal kingdom and devolution into polluting destroyer of the Earth.
Piraro and Higgans are now launching a two-week campaign to sell T-shirts featuring the comic in order to remind wearers and their peers about our daily impact on the planet. And the couple generously pledged to donate 20 percent of proceeds from the campaign to Roots & Shoots.
Dr. Jane is a big fan of the cartoon and its reminder that we ought to be kinder to the Earth. The image’s lack of text allows viewers to place their own interpretations on it, and Dr. Jane sees the cartoon as an expression of a cycle in two parts: in part one she sees “the creatures crawling from a sparking crystal clear ocean, and the evolving humans walking through beautiful environment,” and in part two she sees “the human walking on through increasingly polluted environment, away from encroaching desert, the garbage spreading pollution, as he throws it into the ocean, and killing creatures such as those that started our evolution.” But by donating to Roots & Shoots, Piraro and Higgans are helping add an as-yet unseen third step in this cycle, according to Dr. Jane, “ .. of little children dismayed and following on behind and cleaning up!” While we may not see Piraro create a new comic strip featuring these children, his donations to Roots & Shoots helps ensure that young people have the opportunity to break the cycle of mankind’s devolution. 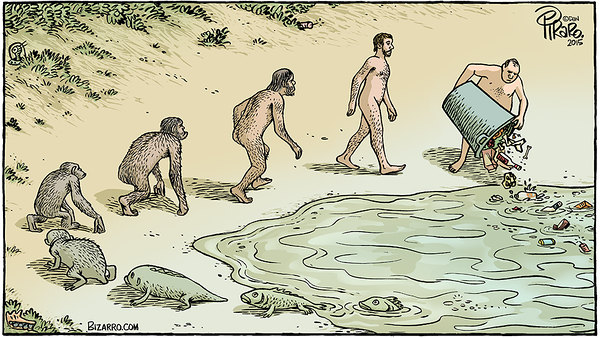 You can learn more about Piraro’s T-shirt campaign by visiting his site here.

To learn more about Piraro’s creative process, decision to support Roots & Shoots and advice to young artists eager to help better the world, read his interview with Roots & Shoots here.