You are at:Home»Jane Says»Dr. Goodall: Today is a Day for Elephants

World Elephant Day, August 12, is one when animal lovers around the world join together to celebrate the miracle that is the Elephant. It is a day to contemplate how truly wonderful they are, with their complex social lives, the close affectionate and supportive bonds between family members that can last through life. There is a long childhood when calves learn from their mothers and the wise elders. They are curious and playful. There is nothing more fun to watch than young elephants playing in the water where they mess about like kids in the ocean. Elephants are highly intelligent and have very long memories. Perhaps you watched the joyful reunion between two females after a cruel separation of THIRTY YEARS! They clearly experience emotions that are probably similar to our own, such as anger, depression and grief. Clearly elephants are special.

But though this should be a day to celebrate these mighty pachyderms, it is sadly even more important that we commit to working, in whatever way we can, to save them. Both Indian and African elephants are losing their habitat and being hunted when they raid village crops. Indian elephants are captured and cruelly trained for the circus and to carry tourists.

African elephants, today, are victims of the ivory trade. They are being slaughtered by the thousands – on average 100 each day. Save the Elephants (the NGO founded by Iain Douglas Hamilton) estimates an average of 33,000 elephants were lost to poachers every year between 2010 and 2012. Over 64 percent of elephants in Central Africa have vanished in the past decade. And in Tanzania, where poaching has been shocking, the estimated number of individuals has dropped from almost 110,000 to just over 43,000 in the past five years. At this rate, some populations may well be utterly gone in about ten years.

They are being killed for their tusks. The largest demand for ivory is in Asia, particularly in China which has been importing huge numbers of tusks. Because of increased demand, and because importing ivory is now illegal almost everywhere, the price has tripled in the last three years. One kilogram of ivory can now fetch £1,225 ($1,914) Today highly organized criminal syndicates have become involved – ruthless people working with corrupt officials at all levels, even the highest. They can afford not only to pay poachers, but to arm them with sophisticated weapons. Sometimes entire herds of elephants are killed, shot with automatic weapons, their tusks dug out of the flesh. 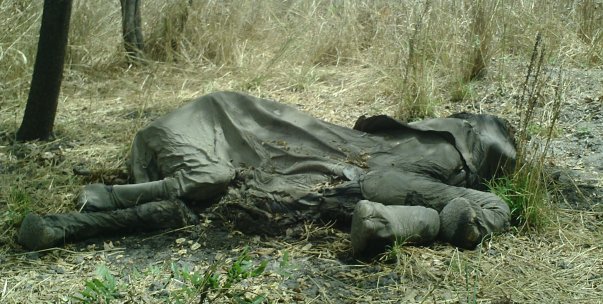 Elephants are slaughtered for their ivory tusks. Photo by Bouba Njida.

One problem is poverty. A peasant farmer will find it hard to refuse a large bribe if he shows poachers the location of elephants. Many rangers are incredibly brave and dedicated. Many are killed in the line of duty. But they are mostly poorly paid and some succumb to hefty bribes.

And so, clearly it is of essence to reduce the demand. This means raising awareness about the cruelty, the slaughter. I have talked to a large number of people in China, and was amazed to find that many believe that elephants shed their tusks each year – like stags shed their antlers. They have also been told that only ivory from elephants who died natural deaths is used. By now many education efforts are underway, with high profile actors playing an important role. Our own Roots & Shoots groups are mounting education campaigns in China and Hong Kong. And more and more documentaries are being made, often by film teams risking imprisonment – or worse – as they work undercover to capture the truth of what is going on.

I have been fortunate. I have had the opportunity to get to know a number of wild elephants in Ruaha National Park where, for a short time, the rangers were trained to follow and observe known individuals. There was Rafiki with her twin calves, Fred, full of the playful mock aggression of a juvenile male, trumpeting, spreading his ears and charging a warthog, or an antelope – once an ostrich. And there was the ancient Ahmed, so old that the cartilage of his ears sagged, and his skin had dropped in wrinkled folds around his ankles. Then, in Manyara National park, there was a special moment when Iain Douglas-Hamilton introduced me to his favourite female, Virgo – and she stretched out her trunk to touch my hand.

Known and loved, each with his or her individual personality. How cruel we are as a species. Each of the thousands of
elephants murdered had his or her own personality, place in the herd, family bonds. Each was an individual that mattered. Each deserved respect. Each was destroyed to hack out ivory – even from juveniles with tiny tusks. Bodies butchered, family bonds broken, and the desperate grief and trauma of those left behind – those spared because they had no tusks, or because they managed to escape.

Elephants are courageous. If danger threatens a herd, the adults will circle the calves and their mothers, watchful, ready to charge. But they have no protection against guns. We humans are destroying them; we humans must protect them. Only if we all work together can we hope to save them from extinction.

On this World Elephants Day, learn what you can do to protect this extraordinary species

What can you do?

Become knowledgeable about the crisis.

Share that knowledge, especially with children. Use Social Media.

Donate to organizations fighting to save elephants:

Save the Elephants, founded by Iain Douglas Hamilton, the first scientist to conduct a long term behavioral study of wild African elephants, works to protect, research and educate on elephants.
savetheelephants.org

The World Wildlife Fund (WWF) works to protect african and Asian elephants by monitoring their ecology, reducing conflict between elephants and humans and encouraging anti-poaching and anti-ivory trade initiatives.
http://www.worldwildlife.org/species/elephant

TUSK works to protect wildlife while promotion community centered conservation that educates and alleviates poverty to take human pressures off of wild habitats and species. Species protected in its 50+ projects include endangered elephants, rhinos, chimpanzees, gorillas, cheetahs and lions.
http://www.tusk.org/index/us

Elephant Voices studies elephant cognition, communication and social behavior in an effort to understand and share the dynamics of elephant societies which are important factors in conservation efforts.
http://www.elephantvoices.org/

The Thin Green Line Foundation, which Dr. Goodall is an ambassador of, works to protect rangers who risk their lives on the front line of conservation. With over 1,000 park rangers having died in the last 10 years – 75 percent by commercial poachers and armed militia groups – The Thin Green Line provides rangers with anti-poaching training and equipment, and provides financial support to the families of rangers killed protecting wildlife, in the line of duty.
http://www.thingreenline.org.au/