You are at:Home»Youth Power»May Project of the Month (POTM): Building a sanctuary seed by seed

When it gets cold in California, people hunker down for the winter, break out their hot chocolate and maybe start a Harry Potter marathon. But for the monarch butterfly, when it gets cold in California, they start their 2,500 mile long journey to the warmer regions of Mexico. There, they will hibernate in pine or Oyamel fir trees for a few months before returning to the Northern region to feed and mate. Their migration is the longest journey of any insect. Aside from this migration and the fascinating metamorphosis that the monarch undergoes from egg to caterpillar to chrysalis to butterfly, it also has a very interesting feeding habit. The one and only plant that monarch caterpillars eat is milkweed, and it is essential for the adults to lay their eggs. So the monarch-milkweed relationship is a very dependent and fragile one that scientists have been carefully watching.

Unfortunately, milkweed has been on the decline. As a result, so have monarch populations.

The plant, on which monarchs lay their eggs, used to spring up in between rows of corn, soybeans, and other commercial crops. But today, many farmers plant herbicide-resistant versions of these crops, which allows them to spray their fields with powerful chemicals such as Roundup—killing milkweed in the process.” (Science magazine) 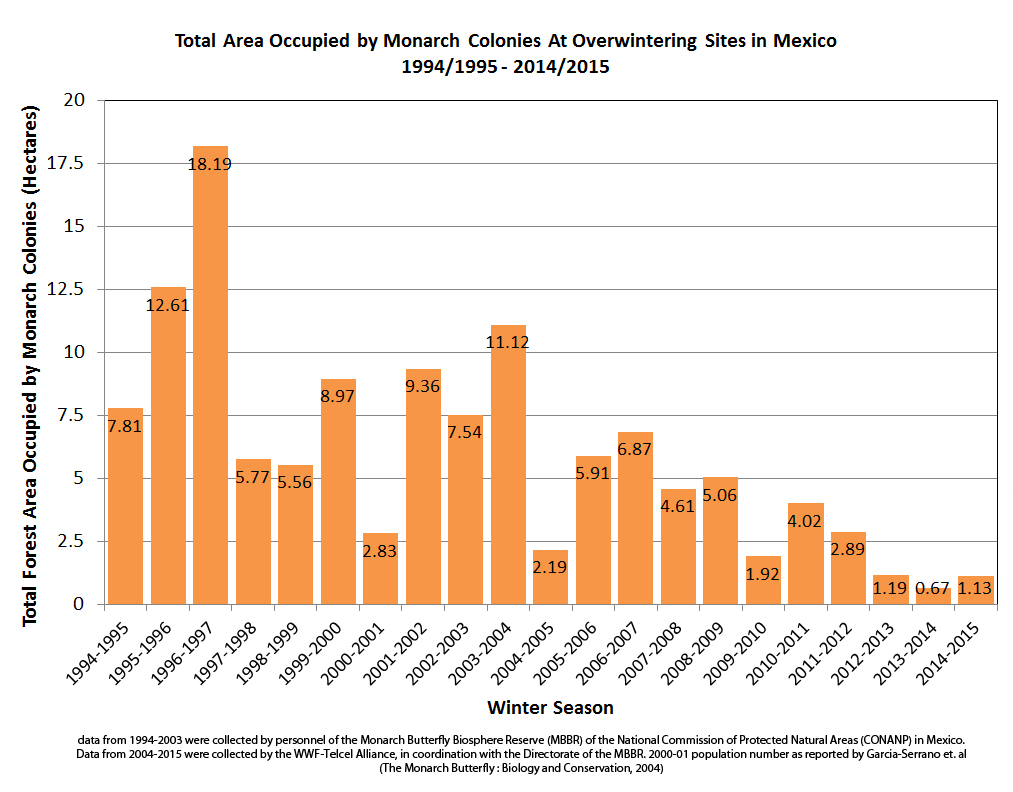 Compared to the 18+ hectares that monarchs used to occupy in Mexico during the winter, in 2014, they hit a record low of only occupying 0.67 hectares.

Students at Canyon View Elementary in Irvine, CA, from kindergarten all the way up to sixth grade, decided to do something to help the plight of the monarchs by starting a pilot Roots & Shoots program with their fearless leaders Kim Konte and Michelle Toulmin. This came about as a result of the success of the Non-Toxic Irvine campaign, which outlawed the spraying of toxic pesticides in all public areas in the entire city of Irvine as of February 23, 2016. Non-Toxic Irvine was started by a few community members who were outraged when they heard that Roundup, a toxic pesticide that has already been banned in many countries, was being sprayed in all Irvine parks, fields and sports complexes. Once the ban was passed, the school districts turned their focus toward implementing organic options, with Roots & Shoots being a main contributor for this endeavor.

The campaign started with students educating themselves on the importance of organic gardening in order to implement such techniques in their own school garden. They learned about the dangers of toxic pesticides, especially for young children, and about the benefits of eating organic food. They identified native flora, fauna and grass species and the climate that they grow in to decide which species they should grow in their own garden. The students made a map of the school garden’s footprint in order to decide which areas needed improvement. They even began regulating their water use with a state of the art irrigation system provided to them by the IUSD’s Maintenance and Operations led by director Joe Hoffman.

They then realized that the information they were discovering about the benefits of organic landscaping was important, and they couldn’t just keep it to themselves. So, they presented their findings to the Board of Education in hopes that they switch to organic landscaping in the entire Irvine district. One of the arguments they presented outlined the dangers of gasoline-powered leaf blowers, which prompted the school to switch to a battery powered option —success! They are now asking the district to implement this ban on gas-powered leaf blowers district wide. 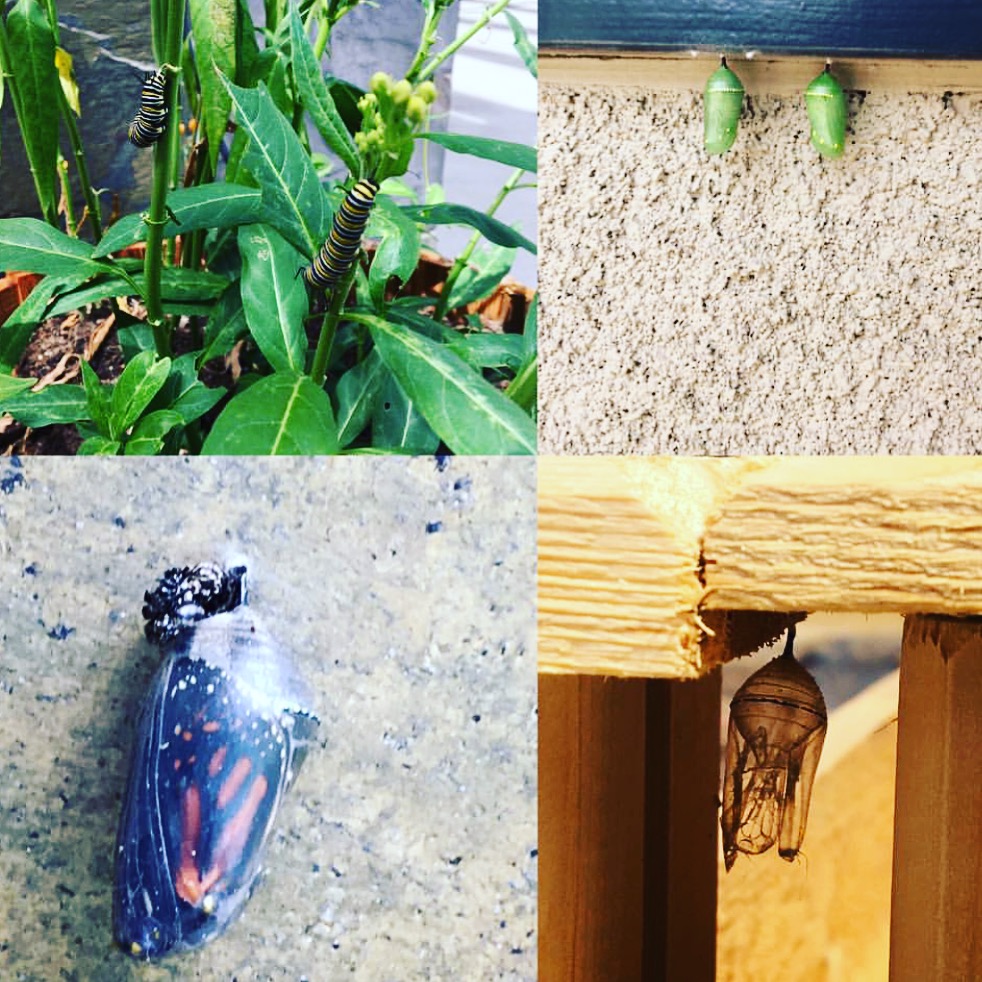 Once all of these wider issues had been tackled, the Roots & Shoots group decided to hone in on what had been near to their hearts to begin with — monarch butterflies. The students chose an atrium in the school that was well-protected from predators and could be enjoyed by multiple classes. They purchased organic compost with the $200 Roots & Shoots mini-grant for milkweed seedlings. The group planted 8 mobile butterfly gardens to celebrate Earth Day, and these gardens have already become a sanctuary for monarchs in just a few months. To date, while early in the monarch migration, Canyon View Elementary has had 42 chrysalises in just two cycles of butterfly maturation. They are now preparing for their third! Watch their garden undergo a beautiful metamorphosis in this video documenting their campaign!

The Irvine PTA has been so impressed with the work being done by the Roots & Shoots club of CVE that they voted for Roots & Shoots to be added as one of the official programs offered by Canyon View Elementary. Hearing about this sparked the interest of the other schools throughout Irvine, leading to another PTA meeting which took place in front of the entire PTA executive board, past and present. In this meeting, they discussed the possibility of Roots & Shoots being implemented in all 37 Irvine schools comprised of 32,000 students!  Fingers crossed! The sixth graders are already talking about continuing Roots & Shoots in their future middle schools.

CVE’s Roots & Shoots project is a huge success. If you want to be a part of the fight to save monarchs, you can do just that right from your home. Join Roots & Shoots for a 1-Click Campaign to “Help Migratory Species” and get some tools and tips for making your own milkweed sanctuary.