You are at:Home»Conservation»Bringing Back the Bees Without Harming the Environment

What did you have for breakfast this morning? A cup of coffee? Avocado on toast? Berries and yogurt? Some honey nut cereal by chance? If you answered yes to any of these questions, you consumed a product pollinated by bees, the hard-working insect that allows you to stay hard at work. Bees are essential for our food sources at multiple levels. Not only do they directly pollinate certain foods such as fruits and vegetables, but they also pollinate flowers and other vegetation which is then consumed by the animals that some of us later eat (BBC).

Some WILD stats for you:

So what’s all the buzz about?

Unfortunately, bee populations are rapidly declining, so try to rethink your breakfast options without them…it’s pretty bleak. Since 1942, bee populations have been cut in half, while the production of crops that require bee pollination have grown by 300%, creating a huge gap. 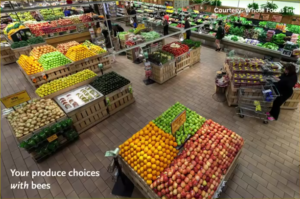 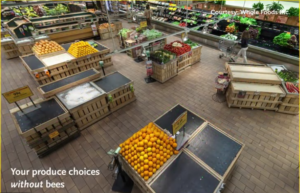 Their decline can be attributed to 3 main interacting factors: disease, pesticides, and monocultures/flowerless landscape.

What works and what doesn’t work for saving bees:

Recently the internet sensation #BringBacktheBees campaign by Cheerios used their spotlight as a stage to talk about the plight of bees. This is an issue near and dear to their hearts considering Honey Nut Cheerios is just about as popular as regular Cheerios and honey is pollinated by bees. The main activity suggested by the #BringBacktheBees campaign is to plant wildflowers in your own backyard using their free wildflower mix that people can sign up to receive in the mail (although they are currently out of stock due to the huge positive response). The idea of the mixture is that it provides a wide range of flowering plants that the bees can pollinate which keep their diets healthier and their colonies more resilient.

When it comes to planting wildflowers, it is tricky to make a nationwide or worldwide cure all… this issue needs to be handled on a case-by-case, city-by-city basis. We suggest you to be sure of which seeds are appropriate to plant in your area before planting, as some wildflower sees could be invasive in certain areas and could actually be a step backwards for bees. For example, Forget-me-nots are invasive in Massachusetts and Connecticut. Planting species that are not native to the area could displace native plants, so the bees that are native to that area no longer have flowers that they recognize.

Let’s use this idea as inspiration! Look up the plants native to our area and plant those. It’s just one extra step but it could make a world of difference. General Mills’ partner in this campaign is the invertebrate conservation non-profit, Xerces, and they have a wealth of information on which plants you can plant to help bees in your area. You can also use the “state search” page from the USDA in which you can search a particular species and filter it by region to see if that plant is a native or introduced species.

The Roots & Shoots 4-Step Formula emphasizes the importance of getting to know your community before taking action. Not every community has the same problem so not every community can implement the same solution. You’ve already taken the first step, Getting Engaged, by educating yourself about an issue that not many people know about. The next step is the most important one, especially for campaigns like this: Observation aka Community Mapping! In this step, you can map out the particular bee species that exist in your area, the flowers they usually pollinate, and the plant species they are lacking so that you can be precise and efficient when you Take Action (step 3). Doing all of these steps gives you all the more reason to finally Celebrate (step 4) at the end of your campaign if you know you gave your best effort to make a difference in your own community.

bees Endangered Species Pollinators Roots & Shoots Wildlife
Previous Article“Let’s go surfin’ now, Everybody’s learning how” …To Do It Right by the Environment
Next Article March Project of the Month (POTM): What is a “Man” Without His “Grove?”