You are at:Home»Youth Power»March Project of the Month (POTM): What is a “Man” Without His “Grove?” 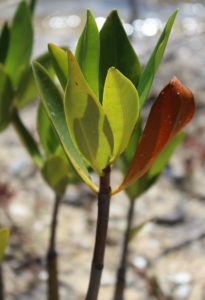 Imagine a world with only bleach white coral reefs, no coastal birds, and floods that could take your feet right out from under you. This is a world not so far in the future if the destruction of mangroves escalates any further. Mangroves are some of the most important intertidal habitats that exist. You’ve most likely stared right at one, not realizing even the surface of its importance. You probably even thought to yourself that they look like strange stilt plants that could just walk right off. But in fact, they haven’t been walking anywhere, humans have been purposefully removing them.

The benefits of mangroves reach far and wide, as they are some of the only vegetation that can exist in the tough brackish waters of the tropics and subtropics. Here are just some of the incredible services provided by this ecosystem:

*facts taken from the Florida Dept of Environmental Protection

Mangroves are particularly important in South Florida, a low lying coastal region in which flooding and water level rises are constant threats to the community. That is why a teen conservation club, Wild Over Wildlife (WOW), has taken it upon themselves to bring some awareness to the plight of the mangroves and has designed a rescue approach that includes the whole community, one they are calling “No Mangrove=No Man.”  Wild Over Wildlife was founded by three brothers, Christian, Derek and Landon Petrisko, who were just 9, 7 and 5 years old at the start of this club’s journey. Since then, they have added three other dedicated teens to their Board of Directors, Trent and Lilly Tougas and Taylor Betts, and are open to animal-loving students of all ages in Ft. Lauderdale, Florida who are interested in saving animals and the environment. Their membership has now reached over 100 kids!

The organization has done projects of all kinds and partnered with nonprofits in Florida and beyond such as Friends of Spoil Islands, and the Marine Clean-up Initiative. They are wildlife conservationists and activists, working both hands-on with animals and in the advocacy realm spreading knowledge about the animals. And on top of that, the Petrisko residence serves as a forever home for over 50 animals who have all been abandoned or abused. They make presentations and hold workshops at camps and schools with the animals as their own ambassadors to give people an up close and personal look at conservation in action. WOW recently partnered with the Coral Restoration Foundation to transplant corals from nurseries to the ocean, and they hold weekly beach cleanups to introduce underprivileged children to the ocean. 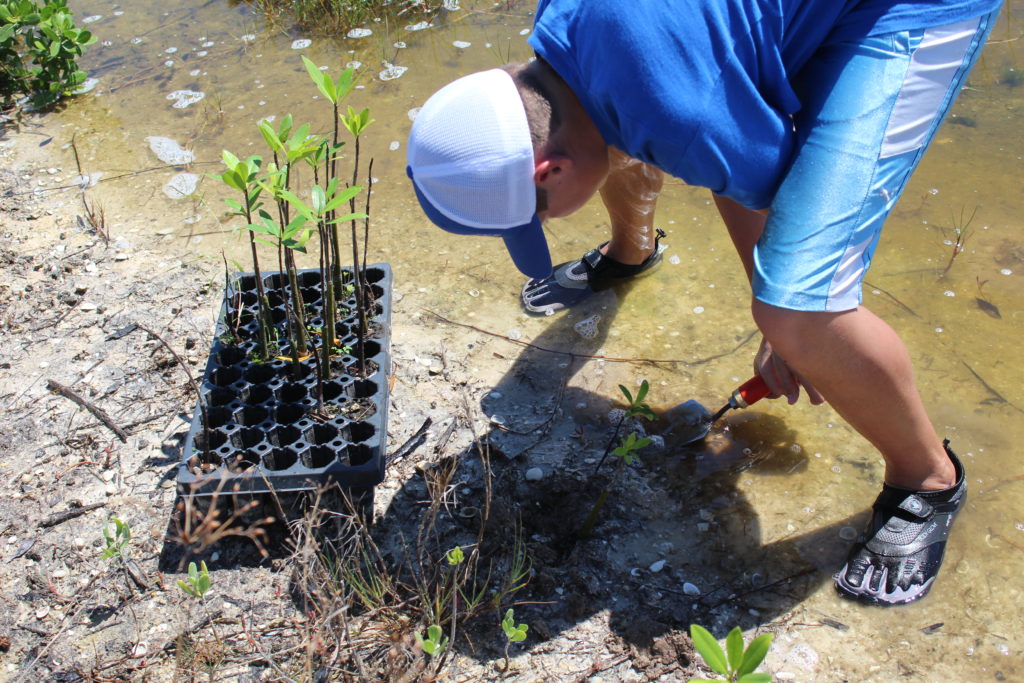 The mangrove project in particular is a combined effort with the Florida International University SEAS “Adopt-A-Mangrove” program and the Lee County 4-H Club. Wild Over Wildlife recently received a Roots & Shoots mini-grant and put the funds toward the purchasing of seedling trays, soil, trowels and watering cans. Many of the club members are currently growing mangrove seedlings in their backyard, and hundreds more seedlings are growing in the FIU shadehouse. People in the community are even growing them right on their office desk! Since the inception of this project in 2014, they have already transplanted thousands of seedlings in the South Florida area, many of which went to an Indian River Restoration project spearheaded by the Brevard Zoo.

The end goal that these avid teens are working towards is a complete restoration of the Oleta River area. The mangroves there were removed decades ago and Australian Pines planted in their place. The pines were planted to “soak up the swamp” areas of Florida. They have accomplished that and much more, with unrestrained growth that produces a monoculture along the coast. Their density produces too much shade and their leaves emit an herbicide that kills all species around it. Since the roots of this tree are foreign for animals that are used to mangroves, they can no longer be used as nesting sites. And since the roots aren’t as strong as mangrove roots, they cannot withstand the wave action and have caused significant damage in hurricanes. The Oleta River is in Miami, a densely populated city with over 400,000 residents, yet these mangroves still serve as an oasis for so many species of wildlife.