You are at:Home»Conservation»Meet the Vaquita, Before It’s Gone

In the Gulf of California’s shallow waters, the world’s smallest marine mammal is in desperate trouble. The vaquita, known in Spanish as “little cow,” is projected to go extinct by next year.

There are only 30 vaquitas left in the wild, according to a recent report by the International Committee for the Recovery of the Vaquita (CIRVA). The species was discovered in 1958 and has lost more than half of it’s population in the last 3 years. They are listed as critically endangered and if immediate measures are not taken, the vaquita will join the passenger pigeon on the extinct list.

The vaquita’s largest threat is illegal fishing with gillnets, where they are often caught by accident and drowned. Nearly one in five vaquitas are caught and drowned in these gillnets, which are traditionally used for shrimp fishing. The vaquita is disappearing as a direct result of these human activities.

Despite the fact that President Barack Obama and the Mexican President, Enrique Peña Nieto, announced collaboration to protect the vaquita, many variables in Mexico have contributed to the quick decline of this species. Sharing the vaquita’s habitat is the totoaba, a fish that is also endangered but often illegally fished with gillnets. China has increased demands for the totoaba’s swim bladder, which they believe has medicinal properties. The swim bladders are dried and smuggled from Mexico to China, via the United States.

In 2015, Mexico passed a 2-year ban on gillnet fishing and also pledged $36 million per year to those fishing communities that would be affected by this ban. The gillnet ban coincided with the increased totoaba demand and, since 2015, illegal fishing has only increased. As a result, the vaquita’s population has decreased.

Many conservation groups and individuals are desperately trying to save the vaquita from extinction. A committee was established by the World Wildlife Foundation (WWF) and the Mexican National Institute of Fisheries to research vaquita-safe fishing techniques. Along with other collaborators, they are developing vaquita safe trawl nets, instead of using the hazardous gillnets. 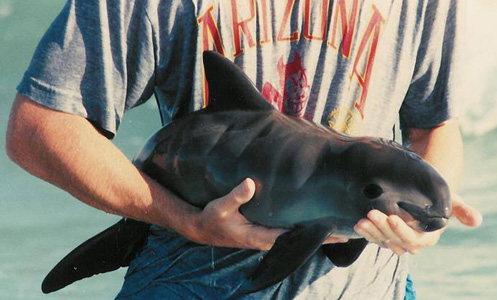 Vaquita calf that was found and brought to CEDO Intercultural in 1994.

Still, the issue remains of whether the Mexican fisherman will give up their gillnets or not. Currently, the local fishermen claim that the vaquita-safe nets provide them with less catch and therefore less profit. Like chimpanzee conservation at the Jane Goodall Institute, the vaquita’s sustainability depends on community-centered conservation to address both human needs and the environment.

With the vaquita’s population so small already, alternative measures are being discussed to directly save the species. Experts are considering using Navy dolphins to capture some vaquitas and moving them to a sea pen until fishing conditions are improved. Most vaquitas would remain in the wild. This emergency procedure to save the vaquita is something scientists would rather have avoided, but the alternative of losing the species entirely is at stake.

Conservationists are urging Mexico to increase enforcement of their gillnet ban to save the vaquita. They are also begging Mexico to extend the current ban, which expires in April of 2017, until vaquita-safe fishing nets are universally adopted. Until these two actions happen, the vaquita’s future is grim.

Many organizations are racing to save and protect the vaquita from extinction. The Sea Shepherd assists the Mexican Navy in capturing illegal fishermen and gillnets throughout the vaquita’s home range. Many news sources are also sharing the Vaquita’s story, in hopes of informing and inspiring others to take action.

You can help, too! Viva Vaquita provides 8 things you can do to help the vaquita, including writing to Mexican officials and signing a petition to ban gillnet fishing. With teamwork and ambition, we can save the vaquita.