You are at:Home»Youth Power»Roots & Shoots Project of the Month (POTM): Feral cats find hope when they stray onto the beaten path

It looks like these feral cats wandered into the right place when they chose to take up residence in the scaffolding of PS 223Q in Queens, New York. Students had observed the furry felines roaming around school buildings and became fearful that they might become homeless if the scaffolding were to come down, so they took action.

Humane societies and animal shelters usually encourage residents of places with harsh winters to be active about helping their local stray and feral cats because shelter in those conditions is hard to come by. In case you were wondering, there is a difference between feral and stray cats even though the words are often used interchangeably.

A stray cat has been socialized to people at some point in its life, but has lost its domestic home, as well as most human contact and dependence. Over time, a stray cat can become feral with dwindling human contact (Alley Cat Allies).

Since cats rely on body heat, the smaller the space provided the better, so it can be very straight forward to aid in their safety — people can use anything from an old cardboard box to a plastic garbage bag to create a haven. While we cannot take these felines into our homes directly, this is a way to make a nice little home away from your home for them.

Ms. Denise Brown, a first grade teacher and volunteer service learning teacher (during her lunch period) at PS 223Q decided that instead of viewing this cat population as a nuisance, she could use it as a teaching moment, creating a hands-on environmental care unit for her Roots & Shoots group.  Two Roots & Shoots groups at PS 223Q combined their efforts for this project: 19 1st graders who call themselves “The Baby Janes” and 8 5th graders who call themselves “The Roots & Shoots Service Learning Girls.” They had a lesson on TNR, Trap-Neuter-Return, participated in school gardening, cleaned up parks, and were educated on how certain habitats in their community provide a safe space for living creatures, often the spaces that we would never view as a “home.”

TNR is the most non-invasive form of limiting the number of cats in a community and it involves humanely trapping a cat, spaying or neutering it, vaccinating against rabies, surgically removing a clip of one ear (a universal sign of being spayed/neutered), and returning it to where it was found.

Feral cats are very fearful of humans, but will still greatly benefit from TNR, so the Humane Society of the United States provides a search website to find the closest TNR organization near you. The students made a search resource of their own using the Roots & Shoots 4-Step Model based on community mapping. They created a map that pinpoints all of the animal shelters in the area, the places where cats may be in need and the places where their environmental impact may be felt.

And get this, the students created boxes in the classroom made out of reused Omaha steak containers and medical styrofoam coolers — what an innovative way to save people, animals and the environment! The boxes were lined with shower curtains and straw and will be put out for shelter at the end of February. Additionally, they crafted their own Roots & Shoots club t-shirts in the color purple for Animal Awareness. 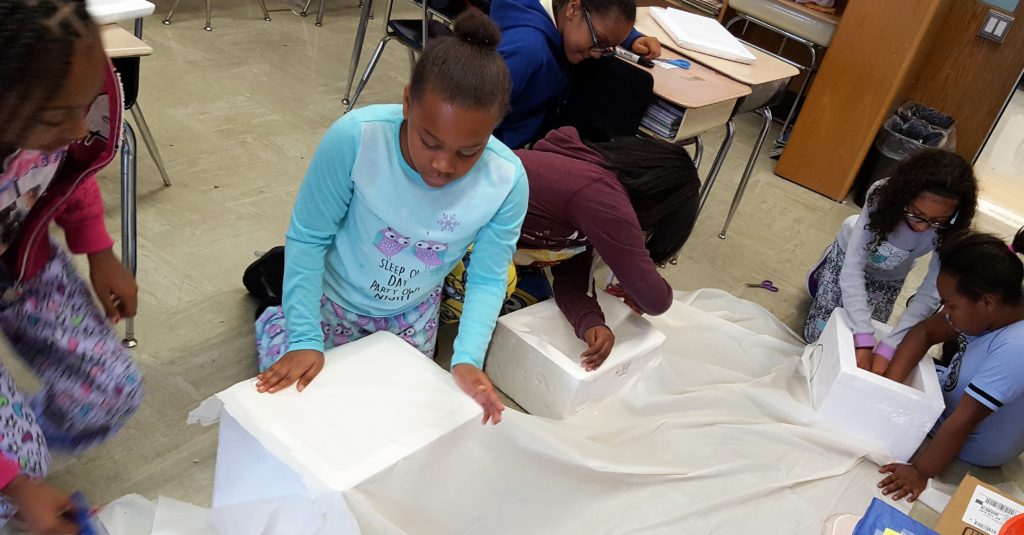 The students took leadership at their elementary school by creating a way for the younger kids to get involved as well. The first graders are now part of the environment campaign, collecting soda caps to send to Terracycle, a company that offers free recycling for hard-to-recycle waste and rewards points in return. These points are redeemable for a cash payment to the nonprofit of your choice, such as a donation to the National Wildlife Federation to reserve critical acreage.

But their reach isn’t just school-wide, it is also community-wide. The project culminates around a day in which the feral cats will be picked up and transported by the local ASPCA to be spayed/neutered and returned, and this offer was also opened up to families and staff at PS 223Q. They created an informational flyer about their campaign to send home with students, so the families can choose to fill out the tear-off sheet and have their pet transported on this day as well. They received a mini-grant for this project which will go towards supplies needed for the transport, and after their use, the supplies will be donated to ASPCA. The young leaders could have so easily passed up this opportunity for growth and challenge by continuing their day to day lives as usual despite their observations. But instead they let this encounter slightly shape their lives, and they most certainly shaped the lives of the animals involved.

“We have the choice to use the gift of our life to make the world a better place–or not to bother” – Dr. Jane Goodall