UPDATE: Last year, after using a colony of more than 60 chimpanzees on an island off the coast of Liberia for 30 years of biomedical research, the New York Blood Center withdrew all funding and left them to die. Last week, after private negotiations between the Humane Society of the United States (HSUS) and the New York Blood Center, the center declared it would only be willing to cover a tiny percentage of the costs of care for abandoned chimps, and continues to refuse responsibility for their long term care.

In 2015, caretakers at the island facility led an outcry which initiated the fortunate response of the Humane Society of the United States (HSUS) and Humane Society International to step in by providing emergency funds and to forge a coalition of more than 37 organizations, including the Jane Goodall Institute. The coalition involved raising necessary supportive funds for immediate chimp care, and to pressure NYBC to work with the coalition to provide a long-term, quality sanctuary for the chimps. This offer, they refused.

See the Today Show video about the situation and the HSUS providing immediate support for these chimps abandoned by NYBC:

Dr. Jane Goodall and JGI have something to say:

Dr. Jane Goodall has once again penned a letter to Dr. Chris Hillyer of the NYBC to condemn the actions (or rather inaction) of the Blood Center, and urge to urge the organization to make this situation right by providing a proper way for these chimps to live out their lives in a sanctuary with adequate support for their well being. 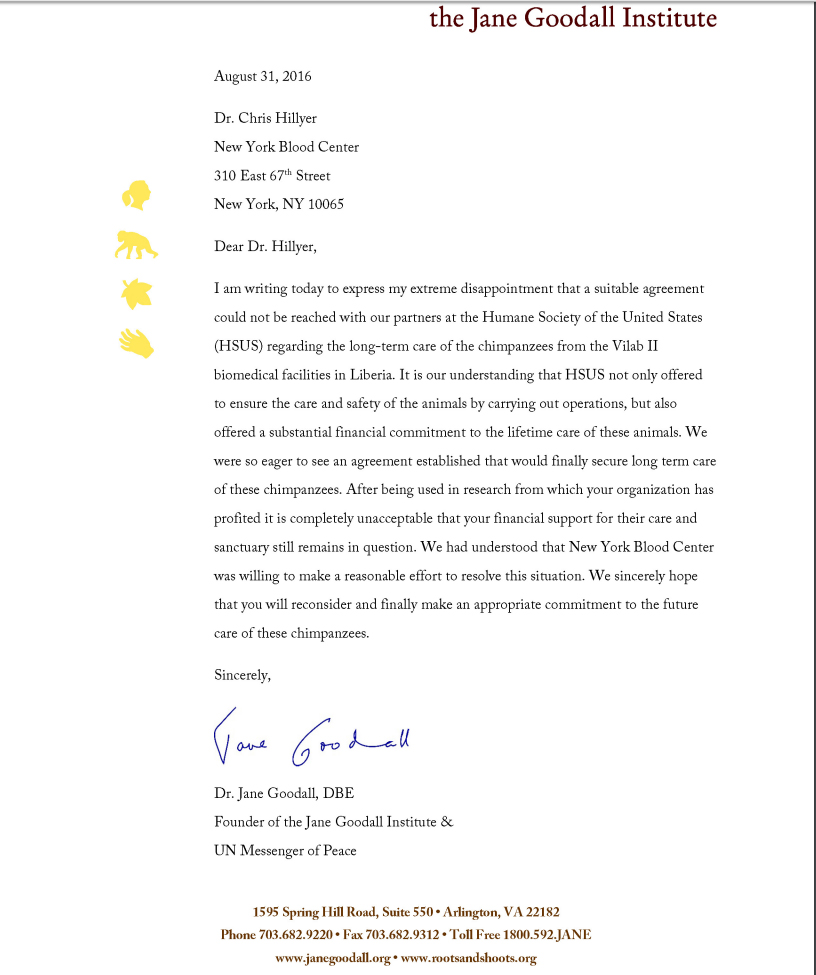 “I am writing today to express my extreme disappointment that a suitable agreement could not be reached with our partners at the Humane Society of the United States (HSUS) regarding the long-term care of the chimpanzees from the Vilab II biomedical facilities in Liberia. It is our understanding that HSUS not only offered to ensure the care and safety of the animals by carrying out operations, but also offered a substantial financial commitment to the lifetime care of these animals. We were so eager to see an agreement established that would finally secure long term care of these chimpanzees.

After being used in research from which your organization has profited it is completely unacceptable that your financial support for their care and sanctuary still remains in question. We had understood that New York Blood Center was willing to make a reasonable effort to resolve this situation. We sincerely hope that you will reconsider and finally make an appropriate commitment to the future care of these chimpanzees.” 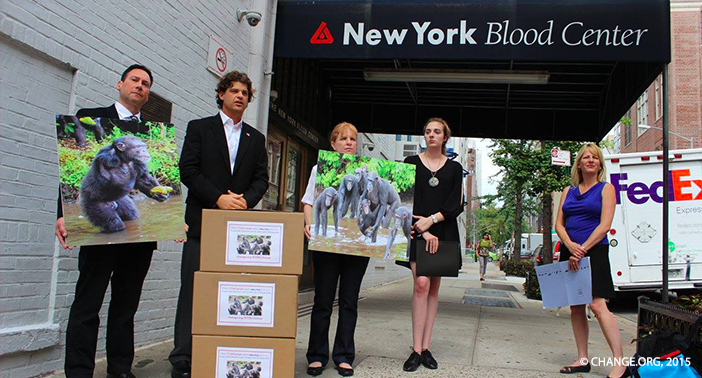 As an organization worth millions of dollars in assets and income, it is unthinkable that they should not claim responsibility financially for the care of the chimpanzees used for their gains and 30 years of experimentation. The organizations working together in the coalition to support these chimps have vital work to do for thousands of other animals, animals whom truly have no voice or means to protect themselves, and should not have to take on additional monetary pressures in this case. NYBC is ultimately the sole entity which should be obligated to provide proper care for these beautiful creatures. The NYBC’s lack of claiming responsibility for these individuals, who have already experienced a lifetime (perhaps the equivalent of many lifetimes) of pain, deprivation, isolation and biomedical testing, is truly without excuse.

The Humane Society of the United States (HSUS) is calling on all of us to be like Jane, and to message Dr. Hillyer about this indescribably cruel and careless decision. Your words have power, use them. Every individual has a role to play.

You can learn more about the chimpanzees and get the latest updates here: www.facebook.com/abandonedchimps.