You are at:Home»Seriously Good For All»Q&A with Wolfgang Netzer: On the Power of Music to Inspire Hope

For composer and musician Wolfgang Netzer, music is an ancient part of the human experience – one which has the power to tell wonderful stories. Jane Goodall recently had the chance to collaborate with Wolfgang to further share her own story through music. 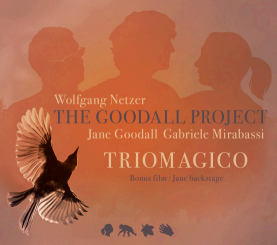 Wolfgang previously worked with Jane as a composer for the score of the 2010 documentary, Jane’s Journey. Now, Jane and Wolfgang have combined their talents to create an album of music that tell the very powerful story of hope for our planet. The album, originally a series of live performances also features clarinetist Gabriele Mirabassi.

“…We three and the audience were united by the music that was more powerful with every performance and increasingly matured expresses my idea of a peaceful world. We hope that this CD, which transports in a musical way my message, to let many people participate in it .”

The result is a moving piece of art, entitled TRIOMAGICO, that inspires a love for the environment and hope for the future. We spoke with Wolfgang about his career as a musician and his inspiration for this album:

When did you decide that you wanted to be a musician? Where did you study?

As a child I already was totally touched by the magic of music. Finally, when I was 13 years old, a quite damaged electric guitar found its way to my hands and soon after, I joined my first band in our village Garmisch-Partenkirchen. After my final examination I had no other wish than to become a musician. I [studied]at the Swiss Jazz School in Bern, graduating 4 years later in Munich. In 1982/83 I went to Rio de Janeiro, to continue my studies at the Villa Lobos Conservatorio and, as a stroke of luck, once a month I [was able to visit]the fabulous Maestro Egberto Gismonti for particular lessons.

Where did the idea to pair Jane’s words with your music come from?

Originally, this idea came from my friend, the director Lorenz Knauer. We have been working together on several film projects for more than 15 years, including “Jane’s Journey”. I got to know Jane during the final cut of the film in Munich. Surprisingly, Lorenz and JGI Germany organized an evening at the America House, with the idea for [Jane and I] to go on stage together. It became an improvisation over film materials with acoustic guitar and Jane’s spoken word.

How do you think music helps tell Jane Goodall’s story?

As we all know, music is a universal language with the incredible capacity to reach human souls (and of course even animals!) in any place on our planet. In my opinion, Jane’s words are following the “universal logic” of our being and surviving. The power of music, for me, has the same strength as the essence of Jane’s message. Several times after these special evenings, people came to tell us (the musicians) about their deep emotional [reactions], even if they didn’t understand English at all.

How would you describe your creative process when you are composing?

For me there are many ways of creating music. At the center of my process is probably the high attention to my “inner ear”. Then again, it makes a difference if I am working on a film sequence where mostly a mood, a pulse or emotional situation is guiding the musical expression, or if I am writing a “free” composition that is allowed to float through taller rooms within my own boundaries.

What inspires you to create music?

It’s the music itself! Our world is full of sound, music is all around us depending on our own reception. “It is not only the nightingale but the whole family of birds that is creating this glorious never ending concert”.

For you, what is the most powerful thing about music?

… and that is the most overwhelming power of music: a certain order of only four or five notes can create music which deeply touches the soul of our human nature, independent from religion, colour or language. It is simply from “The One” origin.

What does the Album’s name, Triomagico, represent?

Being on stage together with Jane and the great clarinet player Gabriele Mirabassi, we all feel the same “magical moment”. Similar to a relay race, Jane’s words slide into the music…the music slides to Jane…. the message to the music…. so the three of us are running as a “well rehearsed team” for the same goal!

How did composing the songs for this album differ from composing music for the film, Jane’s Journey?

The main difference between the “Live” material TRIOMAGICO and the score music certainly is the dramaturgy. As I mentioned before, in a film sequence, the “boss” always is the content. The music has to be the “servant”, trying to make the best of a scene. Contrasting that to playing live on stage, we are a team without boss. On the wings of music, we catch Jane’s “relay” to carry on the essential message: hope for the planet.

In the very beginning of our “stage experiment” I did not have a concrete idea. I was touched by Jane’s words (as many of us are) and just tried to give something back to amplify her message. Anyhow it´s the attempt to reflect Jane’s magic into music. Sharing this magic with Jane on stage, I strongly noticed that the human race is deeply touchable and able to achieve big changes with just a different way of thinking with our hearts and our goodwill. By understanding Jane’s words mainly in our hearts, it just leads us to the decision to damage our planet as little as possible and to respect all creatures. This shows us an elementary part of our nature. If a very simple music is able to touch us, it is a simple truth that each and everyone can make a difference every day.

TRIOMAGICO is now available here, and hard copies are available on the JGI Austria Website.