Anna Katogiritis, of Karpathos Greece, holds a degree in Molecular Biology from the University of Crete in Greece. She will be graduating with a degree in veterinary medicine from the Virginia Maryland College of Veterinary Medicine (USA). Anna has been involved in animal welfare campaigns for over 15 years. As an animal rights and animal welfare advocate, Anna has volunteered numerous times in Greece, Sierra Leone, Congo and Indonesia to name a few countries, where she has assisted organizations with the rehabilitation and medical care of wildlife and domestic animals. Anna completed an internship at JGI’s Tchimpounga Chimpanzee Sanctuary, under the mentoring of Dr. Rebeca Atencia, followed by an internship at the JGI’s Office of the Founder in Washington D.C. Since March 2017, she is the president and co-founder of the non-for profit organization: Jane Goodall’s R&S Greece, based in Athens, Greece. Her special interests are in wildlife conservation and rehabilitation, animal rights and animal welfare of domestic animal populations- with a particular interest to those that are in underdeveloped areas of the world. Social: @katogiritis 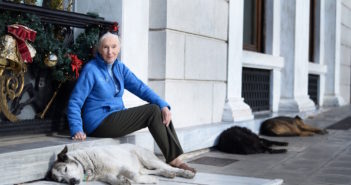 The “Jane Effect” Sparks Change and Hope in Greece

We often hear about the “Jane Effect”, which everyone experiences differently. For me, the “Jane…