On January 15th, 2018, Robert and Barney Swan became the first people to reach the South Pole on an expedition powered entirely by clean energy technologies. The father-son duo traveled on foot for 600 nautical miles across Antarctica on a mission they called the South Pole Energy Challenge. These modern-day explorers set out on their journey to show the world that if they can survive on renewable energy alone for over 50 days in one of the harshest environments on earth, renewable energy is a viable option for the rest of the population as well.

Who are Robert and Barney Swan? 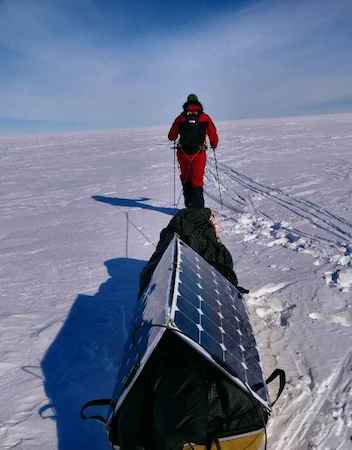 Robert Swan was the first person to walk to both geographic poles of planet Earth. He reached the South Pole for the first time along with two other men 32 years ago on January 11th, 1986. After a 70-day trek across Antarctica without any communication or support from the outside world, they had successfully completed the longest unassisted march in recorded history. Three years later, Swan led a team of explorers from across the globe to the North Pole in an expedition called “Icewalk.” They arrived at the North Pole on May 14th, 1989, but not without a scare: the team almost drowned during their journey due to the unseasonably early melting of the Arctic ice.

As someone who has witnessed firsthand the effects of climate change on both polar ice caps, Robert Swan has dedicated his life to preserving Antarctica as the last pristine wilderness on earth by promoting recycling, sustainability, and renewable energy. He is the founder of an organization called 2041 whose mission is to “protect Antarctica and unite those who seek to protect our world and create a more sustainable, clean energy future.” The organization gets its name from the year that the Protocol on Environmental Protection to the Antarctic Treaty is set to expire. Signed in 1991, this moratorium on mineral and oil exploration protects Antarctica as a natural reserve devoted to international peace and science for at least fifty years.

Barney works hand-in-hand with Robert at 2041 and is carrying on his father’s legacy to inform, engage, and inspire the next generation of leaders and clean energy advocates.

When Robert, who is a good friend of Dr. Jane’s, and Barney arrived at the South Pole earlier this year, they recorded a video with a message for Roots & Shoots members around the world. Their hope is that the story of their eco-friendly expedition to the southernmost place on Earth will inspire Roots & Shootsers and other young people to strive for sustainability and make positive change in their lives and in their communities. Barney even gave a shout out to Good For All News! Watch the video below to hear their message to Roots & Shoots.

Robert and Barney shoutout to a Roots & Shoots educator in the UK, Wendy, as well as Tara Golshan, Executive Director of the Jane Goodall Institute UK and Erin Viera, Vice President of Roots & Shoots USA.

Are you up to the challenge?

Robert and Barney challenge you to reduce your carbon footprint over the next seven years as part of the ClimateForce Challenge. The mission of the ClimateForce Challenge is to clean up 326 million tons of atmospheric carbon dioxide by the year 2025, aiding in the goal of the United Nations’ 2016 Paris Agreement to keep global temperatures less than two degrees above pre-industrial levels. 2041 will calculate the amount of carbon saved between now and 2025 based on the actions that people just like you take to conserve energy every day!

You can make a difference in your daily life by changing the way you understand and use energy at home, at work, and in your community. Here are some suggestions:

Check out Robert Swan’s TED Talk from 2014 to hear more about this explorer on a mission to preserve Antarctica for the good of the entire planet.