You are at:Home»Uncategorized»Heartbreak and Hopefulness in Puerto Rico, Part 1

How long until recovery? Unknown. At least months, maybe years. Decades before Puerto Rico looks like it did.

Last-minute good news: The one million plus Puerto Ricans living in New York are banding together to help the island. New York’s Governor came to the island yesterday to reaffirm the unique relationship between NY and PR. He is sending equipment and technical teams to assist.

We’re into a week of deteriorating conditions in Puerto Rico. President Trump just sent 22 tweets about football players who should be fired for exercising their constitutional rights of peaceful protest and 0 tweets about over 3 million American citizens who are out of food, water, communications, power and many homeless.

FEMA is trying but in over their head. Where’s the military Civic Action Teams? The engineers, the medical assistants. Hospitals are running out of supplies and no fuel for generators. Children in the hospital are about to lose their respirators. People in the rural regions no food or water. Nobody from the government showing up.

Nelly is out with friends trying to get gas for generator and to find a spot with phone service of any kind. We have not been able to phone out. That’s pretty much the case all over the island.

Here’s where we, sadly, have to say we told you so. With over 90% of the food imported and over 80% of the local crops destroyed this is getting serious fast. Maybe now the sustainable programs we have been pushing through Roots & Shoots will gain acceptance.

Almost everything we were growing is gone. Only one sad papaya is hanging on.

We went out for the first time yesterday, driving was an obstacle course of downed trees, debris, and wire & poles. One of the people in charge of Trump’s Homeland Security office called the relief effort a great success story meanwhile 97% of the whole island is without power. No water, people using polluted water from overflowing rivers. No communication over most of the island even for people trying to run hospitals. Needed supplies sitting in San Juan harbor because too few drivers. Airport operating at one-fifth capacity because radar smashed. Thousands trying to leave the island on 19 flights a day.

There is still almost no phone signal. Hundreds of cars parked on side of highway with people trying to reach loved ones. Huge lines at whichever gas stations and at whatever grocery stores were open of had food left.

Everyone is very patient and social. Amazing. Back to the farm. Four hours of generator to cool off freezer and watch news. Local people all over the island continue to help each other.  Forge rivers that lost bridges to try to get hurt & sick people to medical treatment and walk miles for food.

Here’s how you can help:

For those of you who asked how you can help the people of Puerto Rico, here’s a project idea! Research types of tropical fruits and vegetables that will thrive in Puetro Rico and collect seed packets. Box them up and send them to to Rick and Nelly:

With help from local Roots & Shoots students, we will distribute the seeds to the community.

If you want to donate money, we strongly recommend Habitat For Humanity—Puerto Rico programs. They have been building simple but effective housing for families who lost their homes in Puerto Rico. They are honest, reliable, and fiscally responsible. 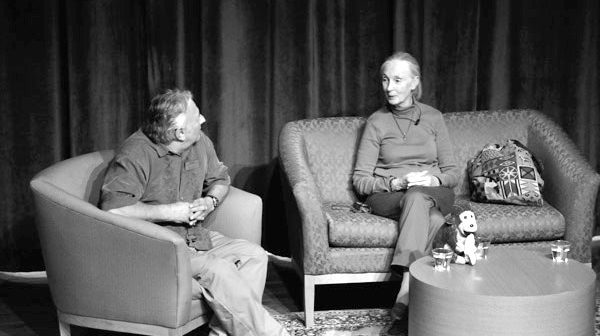 Rick Asselta is credited as one of the earliest Roots & Shoots mentors having collaborated with Dr. Jane and others on the development of Jane Goodall’s Roots & Shoots in the early 1990s. Rick and his wife, Nelly, established a robust Roots & Shoots network in Connecticut before they moved to Puerto Rico where they continue to share Dr. Jane’s message with local youth and Rick serves as the volunteer coordinator of Roots & Shoots Caribbean.