You are at:Home»Conservation»Busakara: Baby Chimpanzee Rescued From the Brink

When two-month old chimpanzee Busakara arrived at the Center for the Rehabilitation of the Primates of Lwiro (CRPL) in June, she weighed little over one pound. This tiny chimp was extremely weak after suffering from a cold and from diarrhea. She was found orphaned in a village near Pinga, in the north-east of the Democratic Republic of the Congo, where she had been saved by local community group of the Jane Goodall Institute’s Roots & Shoots. After traveling several hours to the city of Goma in North Kivu, Busakara spent another three hours on a boat to Bukavu in South Kivu where she was picked up by the staff of Lwiro center and taken in for treatment. 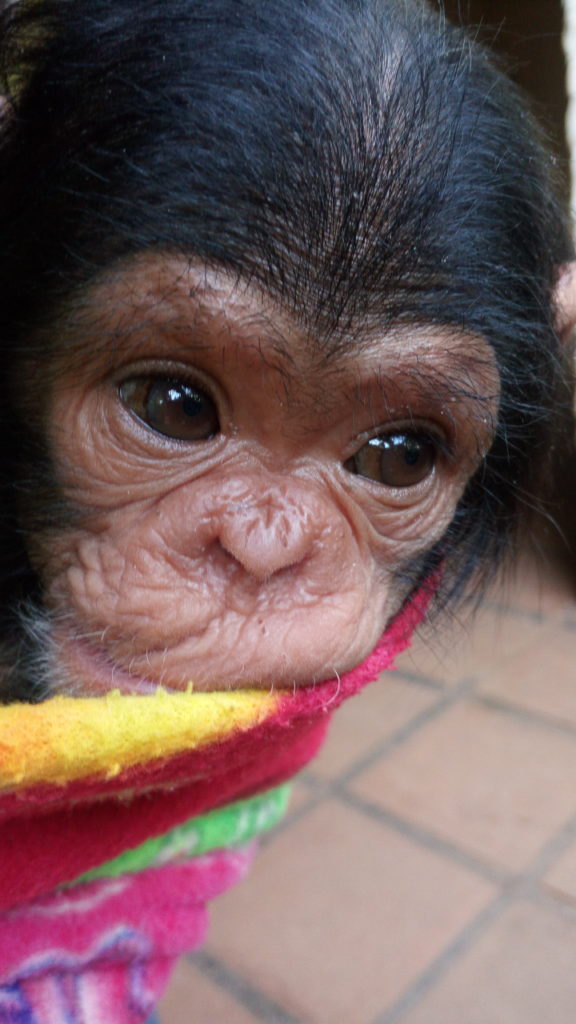 When this very little baby arrived, we didn’t know what to expect as we had never received a baby this small. The whole team was very sad, how is it possible that she was separated from her mother this soon?

Yet, this type of situation is not new for the sanctuary. In 2016 alone, Lwiro received 10 orphaned chimpanzees in need of long-term care – a 50% increase from 2015. Today the center hosts 76 chimpanzees and 96 monkeys, including olive baboons, blue monkeys, back crested mangabeys, grey-cheeked mangabeys, and Allen’s Swamp monkeys. It is also home to numerous parrots, turtles, hyrax, and porcupine – all victims of illegal poaching and the pet trade.

Despite the trauma, Busakara is on her way to recovery. She receives 24 hour care and spends her days with a veterinarian. After only a month in Lwiro’s care, Busakara has grown stronger and now weighs 2.8 kilos. She has good appetite and wakes up every 90 minutes at night to drink a bottle of milk. She is still too small to integrate any of the sanctuary’s groups, but has found a friend in Kalima, another recent arrival. Every year it is estimated that 3,000 great apes are taken from the wild for the illegal pet and entertainment trade. Both these chimps, and the many others now living in sanctuaries across the world (including JGI’s Tchimpounga sanctuary which is home to nearly 150 rescued chimpanzees), could have continued to live freely in the jungle if this horrible demand did not exist.

In the majority of cases, the government agency the Institut Congolais pour la Conservation de la Nature (ICCN) intercepts the orphaned chimpanzees and monkeys and is able to prosecute the poachers, while handing over the animals to CRPL for treatment. Most arrivals are traumatized by what they have experienced, including being hunted down by dogs and watching their parents killed. This effort is also part of a conservation collaborative program led by ICCN, called the Conservation Action Plan for Great Apes in the Eastern DRC (CAP) of which both the Jane Goodall Institute and CRPL are a part. The CAP integrates conservation science, habitat protection, land use planning, sustainable livelihood measures, environmental education, law enforcement, and sanctuaries to combat a more complete range of issues threatening these species and their environments. 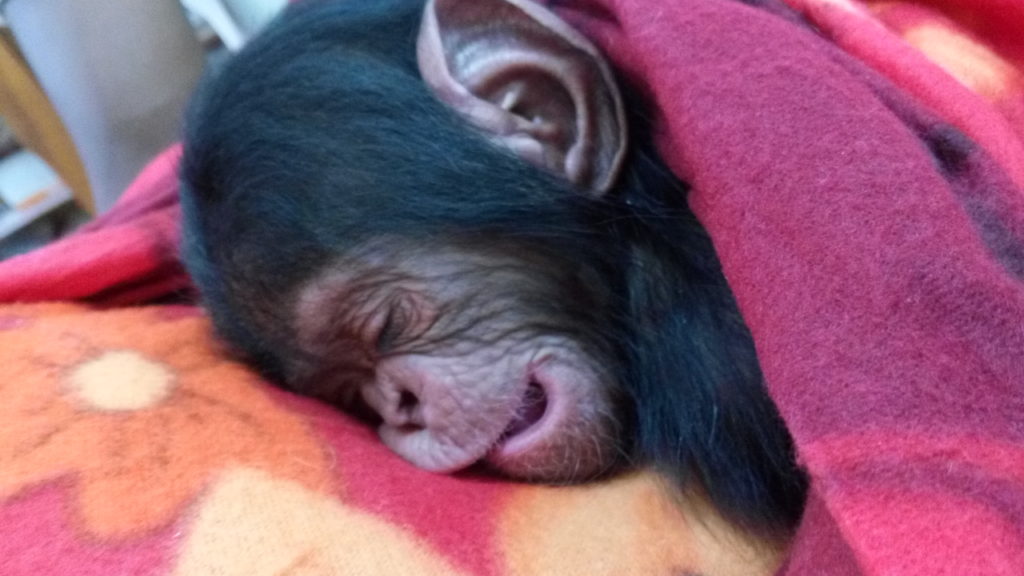 “I am impressed with her strength,” said Lorena. “She has incredible biceps and holds you firmly. When you put her next to your chest and talk to her she does happy vocalizations. She is the most adorable thing I have ever seen. She doesn’t laugh yet but she is always smiling.”

Alongside the ICCN, volunteer Roots & Shoots groups are the eyes and ears on the ground, conducting sensitization on the importance of the protection of great apes and putting in practice the values that Roots & Shoots embodies. In the case of Busakara, it was a Roots & Shoots group from Pinga that recovered her from the village of the same name. 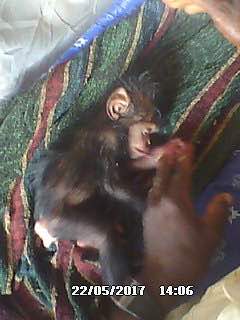 In the local language Kihunde, Busakara means “the good things that arrive with dawn” and the staff at Lwiro sanctuary thought this was a perfect match for little Busakara.

“We loved this name because she is a very beautiful being bought at dawn. She is very calm and always smiling. The most impressive thing is when she sees trees, she stares at them and smiles profoundly…that is home for her!” said Lorena, adding “Busakara is a very sad example of what is happening to wild chimpanzees and the reason for our continued work. We want to work hard to see her back in the forest integrated in a family! I just hope she will be healthy and happy!!”

HERE’S WHAT YOU CAN DO TO HELP #STOPTHESHOW TO END THE DEMAND FOR THE ILLEGAL PET AND ENTERTAINMENT INDUSTRY.

(READ MORE ABOUT THE CAMPAIGN HERE.)

Become a Chimp Guardian: click here to support the care of nearly 150 rescued chimpanzees in our Tchimpounga Chimpanzee Rehabilitation Center in Republic of the Congo. Through your support, JGI has been able to move many of the chimps of Tchimpounga to our island forest sanctuary sites. With continued support we will be able to keep these rescued, orphan chimps happy and healthy!

Sign the Petition: Join our #StoptheShow campaign by using your voice to protect chimpanzees along with other animals and prevent them being put into harmful situations, like Vali and Sugriva, in the name of “entertainment.” Sign our petition and share with you friends, family and loved ones. 3,825 people have already signed and with your help, we hope to double that number to 8,000, and keep going!

Get the T-Shirt: Did you know we share 98.6 % genetic material with chimpanzees? We believe chimps should remain wild and free and not be used in the entertainment industry. Show you do, too: http://bit.ly/2rkhblf. All proceeds benefit the Jane Goodall Institute’s programs to keep chimps wild and free + rescue chimps orphaned by the illegal pet/entertainment and bushmeat trades.