You are at:Home»Seriously Good For All»A Hit on the Timber Mafia Makes for Buzzing Business in Uganda

In Bushenyi district of Uganda, John William Mukongo was a well-known and experienced timber “mafia” member who dealt in illegal logging or timber theft in Kalinzu Forest Reserve (FR) for over 30 years. This biodiverse forest is located in the Southwestern part of Uganda and is famous for six different primate species that include chimpanzees, black and white Colobus, blue and vervet monkeys, L’hoest’s guenon as well as baboons. It has at least 414 species of trees and shrubs, 378 species of birds, and various tropical reptilian and amphibian species. For 30 years John helped destroy this forest. Now, he is working to save it.

I used to cut down trees of commercial value indiscriminately; the bulk of which I could not take and left them to rot, but I was never caught…

John claims that knowing all the forest routes and practicing his cultural rituals prior to entering the forest enabled him to evade forest enforcement, although they attempted to catch him several times. The Jane Goodall Institute intervened and worked with John to move out of the “mafia” and into some alternative sources of sustainable income, reducing his dependence on logging for survival. For the past 4 years, JGI has supported apiculture farming (or beekeeping) with USAID/Uganda Biodiversity Program (USAID/UGANDA BP) in the communities adjacent to this forest reserve, with John being one of 43 farmers in the program.

I enjoyed the money from illegal logging even though I knew what I was doing was wrong, I always wanted to stop, but I had a lot of greed.

John further explained that together with his fellow timber “mafia” they did not know the benefits of Kalinzu forest and all they saw in it was a resource to satisfy their financial needs. Later on, when JGI initiated the USAID/UGANDA BP in the area, he decided to join a collaborative forest management (CFM) group where they were trained in apiculture (beekeeping). This marked the beginning of his incredible journey as a forest guardian. Alongside the incentives and income generating alternatives, John together with the other beneficiaries, was exposed to information concerning the conservation of Uganda’s remaining natural resources, including these forests, which played a vital role in changing their attitudes towards conservation. 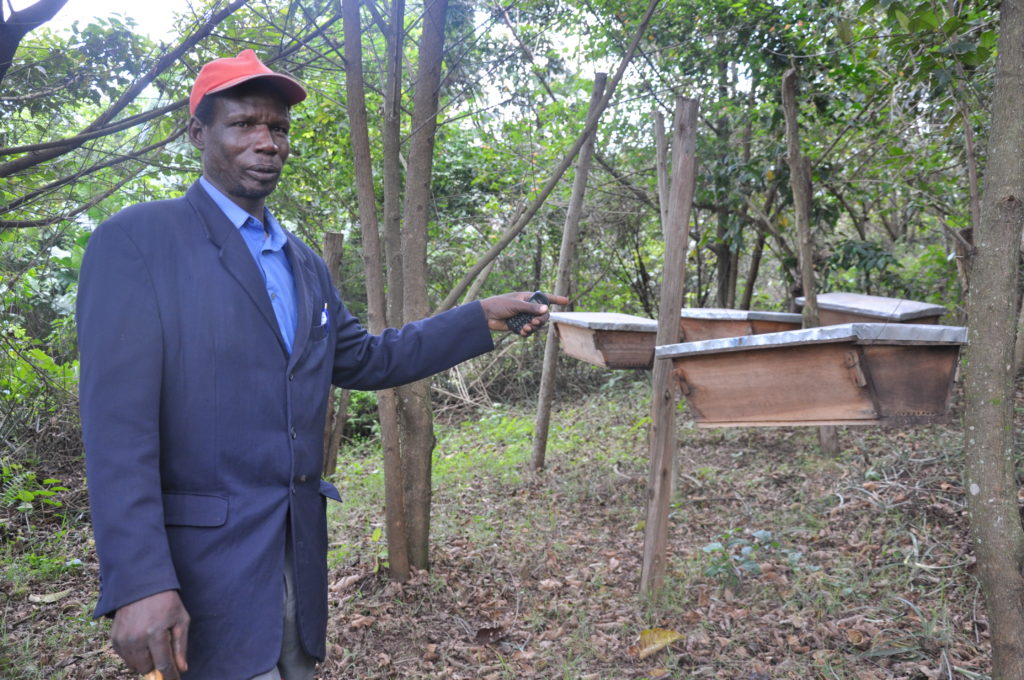 John received more than 10 bee hives from JGI, and through selling honey in addition to other apiary products like wax, he is earning income for his family and hopes to buy more hives to expand his apiary business soon. Timber theft money was previously the only way he could support his children’s education or to buy land, but now his income is all legitimate and sustainable. These farmers have been assisted in improving their honey production through trainings, provision of improved bee hives and equipment as well as using them as models for other farmers to take up bee keeping as a source of income. He included that now that he has the apiary project and agricultural revenue options, he would never go back to the forest to steal timber.

I have underutilized pieces of land with natural trees growing on them. I am going to let them mature and place beehives there. This will contribute to a better environment for all, yet I will be earning a lot of income too. 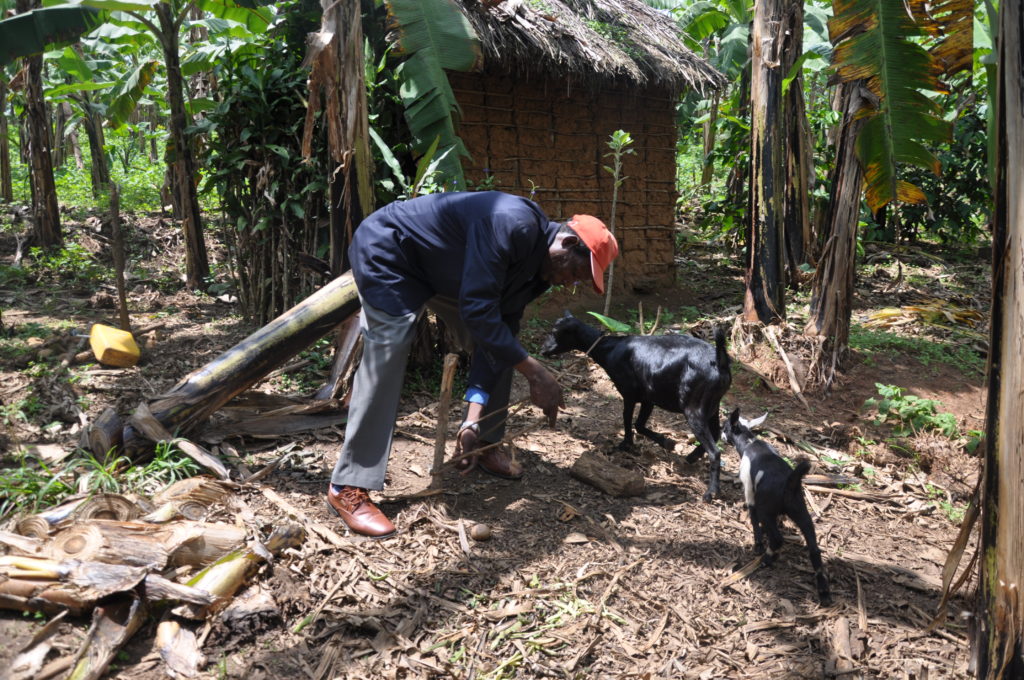 John’s clear drive and skills, coupled with JGI’s mentorship, led to him being elected as the village Chairperson and Patrol Commander for his area working under National Forestry Authority (NFA). Since he joined NFA as the Patrol Commander, timber cutting or theft in the CFR has significantly reduced from 5 Lorries of timber smuggled out of reserve every day, to 20 or 30 timbers in a week. This also means greater forestation – jumping from 40% forest cover when he was in the “mafia,” to 70% forest cover under his watch as NFA.

I am of great importance to NFA I believe. First of all, I know all the routes and tactics timber mafias use and this has enabled us to get the culprits. 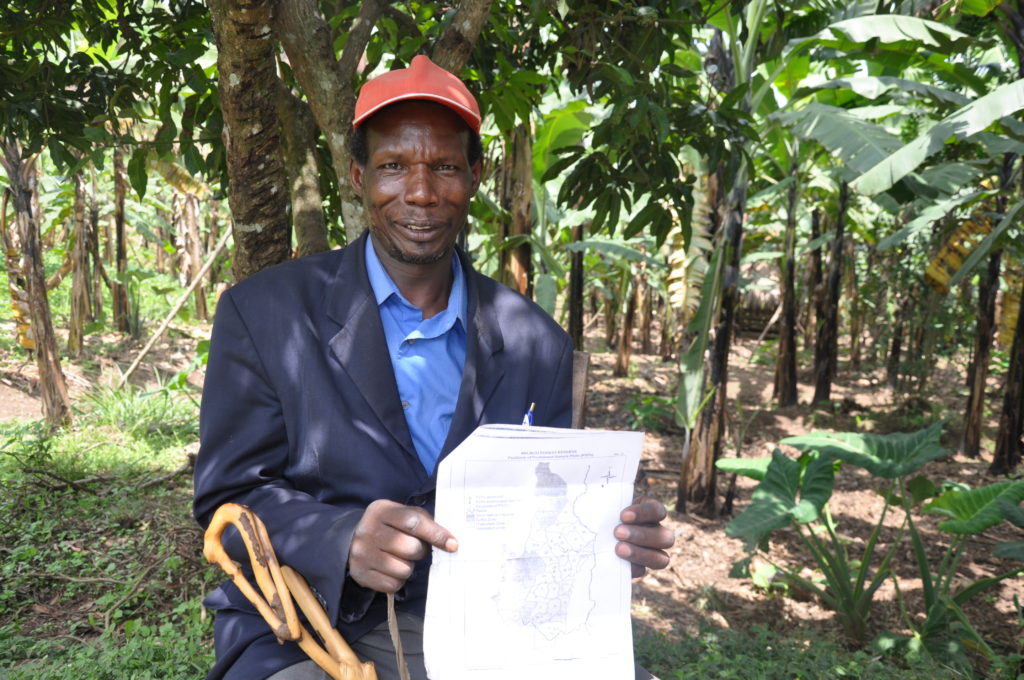 He revealed that first time captured culprits are engaged in a series of sensitizations to have them better understand both the value of the forest and the penalties for timber theft. In the case that these individuals continue to cut down trees and are arrested a second time, they are taken to court and sentenced to various penalties, accordingly. John said he doesn’t only sensitize culprits in order to stop illegal timber logging, but also talks to his friends who he suspects may still be dealing in the “mafia.” He advises them to join CFM groups through which JGI would be able to provide tools and support in so many ways.

I am so delighted, I did not teach any of my children how to engage in illegal logging. I have educated them and I want them to be successful in life not like I was because of poverty and illiteracy.

USAID/UGANDA BP is made possible by the generous support of the American people through the United States Agency for International Development implemented by African Wildlife Foundation (AWF) in partnership with the Jane Goodall Institute (JGI).

Brenda is a staff member of the Jane Goodall Institute in Uganda. She comes from Nakasongola district and joined JGI-Uganda as an intern under the public relations department in 2013. By then she was pursuing a degree in Journalism and finally graduated from Nkumba University in Entebbe.