As our founder, Dr. Jane Goodall’s vision has infused our work with boundless compassion, invigoration, collaboration, kindness and wonder. What some may not realize however, is how this style of leadership also prevails at our Institution. As one shining example: We are proud to announce the new Executive Director of the Jane Goodall Institute! JGI is beyond excited to receive the gift of Dr. Carlos Drews, who is not only a beloved friend of Jane herself, but has already endeared himself to our staff and all those who have interacted with him.

Carlos joined JGI this spring, coming from the World Wildlife Fund (WWF) where he served as global director of species conservation. As a child, very much like Dr. Goodall, Dr. Drews dreamed of studying animals in Africa. This inquisitive drive and love of wildlife took him to the very same place Jane first encountered her wild chimpanzees – Gombe, Tanzania! His baboon research earned him the John Napier Medal of the Primate Society of Great Britain. Drews is a native of Colombia, and earned his Ph.D in zoology as well as a Masters in applied biology from the University of Cambridge, and holds a Masters in biology from Munich’s Ludwig-Maximilians University. His studies in behavioral ecology of primates, caimans and people´s attitudes toward wildlife have taken him across Africa and Latin America. He is warm and creative with the same essential “do-gooder” and hopeful fiber that makes him such a lovely fit for JGI. Watch out for our Facebook Live chat with Carlos this Thursday, May 4th at 3:15 PM EST on the Jane Goodall Institute’s FB page here.

Get to know and love Carlos as much as we do in the conversation below!

Shawn: What motivates you to work in conservation?

Carlos: First and foremost, a fascination for wildlife and the awe they trigger in me. I am curious about the way animals live, their social interactions, and their cognitive abilities. This was a part of my university studies, but the fascination came from early childhood. I’ve always been drawn to animals, especially mammals, and many marine species also. My motivation really comes from my deeply rooted fascination with animals early on.

The second part has to do with a sense of moral obligation. I like observing nature, and as a “user,” (someone who goes into nature in a non-intrusive way) what am I giving back? That is what drives me to be a conservationist: the sense of duty to do something in return for what I receive from nature myself.

S: Thinking back to your childhood, when you became fascinated with animals, who were some of your idols?

C: Definitely one of my idols was the Spanish naturalist, Félix Rodríguez de la Fuente. He created wildlife documentaries in the late ‘60s and ‘70s for the Spanish-speaking world. When I was 9 years old, I was flipping through an encyclopedia of fauna, produced by him, and I saw this guy sitting on the bonnet of a land rover in an African Savanna holding his binoculars, and I asked my father, “What is he? What is he?” And he said, “Well he’s a naturalist,” and that’s when I said, ‘I want to be that!”

S: Your career has been focused on science, as well as conservation. Can you talk a little bit on how you see the two meeting up?

C:Yes! My scientific upbringing was really about understanding the cognitive abilities of animals, and how their behavior makes them succeed in their environment. This gave me insight into animals as individuals, not just the species as a collective entity. This is very important when we discuss the JGI way of conservation, which we’ll talk about later.

Science also gave me a rigor in critical thinking and in analyzing facts and statistics. I like to differentiate speculation from facts, especially in today’s media atmosphere. In some examples, like climate change, half of what is presented as information is the product of fossil fuel lobbyists trying to discredit science, and the other half is demonstrative, peer reviewed fact about climate change as a reality caused by human action. My science background is useful in cases like this as I’m always trying to move through the shrubbery to concentrate on the facts that will inform my opinion.

In the work that I do, I use critical thinking and science – the best available science – to drive conservation decisions. Working with a science-based stance is easy to follow for staff and others who look to your organization for advice or guidance on environmental matters. If you are a science based organization, it’s easy to understand your rationale and where you stand on issues.

S: Is there anything in particular that our readers might find fascinating about the research that you did on baboons?

C:The image many people may have of baboons is aggressive creatures with very fierce canines. Baboons display them often, particularly males, and sometimes they fight. They can be intimidating animals when they deploy them – male baboons are known to gang up on and kill leopards, for example. This image prevails as some fictitious movies have even depicted baboons killing people (baboons do not kill people). What I had to discover is that those events of escalated aggression, when they actually use their canines and inflict injury among each other fighting over females, resources, or territory, are very, very rare.

During my studies I realized: 1) you might only see one to three maximum of such fights per year and 2) what they’re really using to manage hierarchies is not overt aggression. It’s actually a much more subliminal behavior that became the subject of my studies, called, “Psychological Warfare in Male Baboons.” The behaviors are about subtlety, like crossing the path of another baboon, stopping halfway and making that individual go around you, or displacing another baboon from your favorite shady spot, comfortable branch or feeding site. These discoveries made me understand how close we are in our behaviors to baboons and them to us, which was quite enlightening.

It also made me realize that we must challenge the “marketable” imagery of wildlife we receive from some media. Many people want to see the chimpanzee or baboon Game of Thrones, glorifying the (rare) violence of these species. You can develop a narrative that is much more powerful when you explain all of their behavior and nuance. It’s also a way of observing ourselves by observing the behaviors in our primate relatives and how sophisticated the relationships really are.

S: JGI’s approach focuses on the big picture as a global, holistic, community-centered conservation organization helping individual animals. What about your own belief system and philosophies align with JGI’s model?

C: If you have studied animal behavior or spent time with animals – your dog, your favorite horse, cow, pig, rabbit, or fish in an aquarium – you know that they are indeed individuals. They have personalities, a unique way of doing things, and respond differently to the same stimuli. What JGI does is to bridge this perspective on the individual animal, with its ecological and social needs as a sentient creature, with that of the species as a whole. JGI also cherishes the cultural diversity found in chimpanzees and tries to preserve it. It is a really holistic way of looking at the problem of species conservation.

In some debates, it’s all about the animal numbers. You may end up debating ways to maintain species numbers that are “safe,” thinking about satisfying human needs while also sustaining non-human animal population growth or stability. What JGI brings to the table is an understanding that although those kinds of decisions and management may be justified, they may also be disrupting social networks and, accordingly, cause trauma to the animals involved. JGI acknowledges that when individuals valued by their family or social groups are lost (to hunting, for example), it damages the integrity of their communities with potentially drastic consequences. It allows us to make informed decisions, including the individual dimension of the equation, while acknowledging and respecting that we are dealing with cognitive individuals and networks built by these individuals that will benefit from or suffer from the consequences of our actions.

S: Can you talk a little about any moments in your life that come to mind when you were really able to embrace the idea that each of us can make a difference?

C: When my son Antar was 10 years old, he challenged my decision to bike to work instead of driving. He said “Of course I think it is a good idea, but what difference are you really making? Look at all the these cars around us, there’s thousands of people driving. Let’s be real. You are not making any difference other than to satisfy your own feelings of guilt and feeling good about it.” He really got me thinking. If young people do not see the merits of additive, collective action, we won’t make any progress.

This incident caused me to think about ways to visualize how the actions of individuals add up. In the Eastern Plains of Colombia, there are anthills which are bigger than people, and sometimes horses will fall into the mounds and disappear because these are immense underground cities that were built by individuals, each carrying a little sand particle one after the other. Ants will also build bridges by connecting to each other over water, while other ants walk across them carrying the food or larvae. In human societies, one of the best examples is the Arab Spring, which many didn’t think was possible in such a short span of time. It demonstrated the true power of modern connectivity through social media. When individual action starts building up to a form a collective social movement, you can get very profound changes. It’s a very powerful effect: all of these thousands of individuals add up to something monumental. 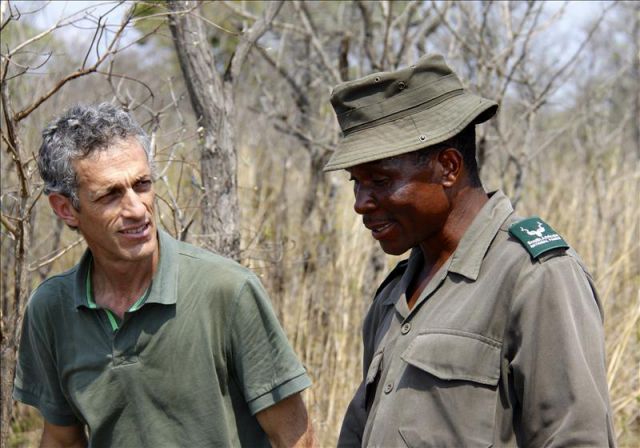 S: Hope is a really big part of JGI. From your perspective, what makes you hopeful for the future of our world? What do you do to maintain your sense of hope?

C: Firstly, Jane often talks about the resiliency of nature, and that is definitely a source of hope for the future. As an example, look at the many whales species that are recovering in the ocean thanks to the whaling moratorium in the 1970s. Secondly, another sense of hope comes from looking at the facts and numbers. Are efforts toward sustainable energy really adding up? Yes, they are. There are more jobs already in the renewable energy sector than in the fossil fuels sector in the U.S. and the generation of energy from renewable sources is now cheaper than  generation of energy from fossil fuels. Because of the work of numerous organizations that believe in a healthier planet, we are changing things that seemed impossible in our lifetime. Third is actually China. Although China is perceived by many as the ultimate threat to the planet’s well-being, they could actually be the ultimate solution because of the global impact of their decisions. I was privileged to visit the China Pavilion at the World Expo in Shanghai in 2010, and learned about their efforts to make their cities more human and more sustainable – leapfrogging to an ecologically sound way of life. I believe if it can happen there, then other countries can certainly do the same.

In terms of what I do to maintain hope, I seek out personal contact with nature wherever and whenever I can. Yesterday, I came across four deer very close to my new house in Virginia. They came out of the forest and starting grazing right there on the lawn. That is a moment that I find sublime. This is when time stops and you realize, “Wow, the world is still intact in some places.” Even in very urbanized, concrete areas like this one, a little patch of forest along a little creek will sustain some interesting wildlife. That gives me hope.