You are at:Home»Seriously Good For All»Dr. Jane Goodall Meets Lilou the Pig

One of the things that enables me to survive my never ending tours is the fact that I meet not only amazing human beings, but also wonderful animals. And so I thought you might enjoy hearing abut some of them! Perhaps the most extraordinary was my introduction to LiLou. I arrived in San Francisco airport on March 21st 2017 and, as we left the plane there to greet us was – a pig!

Yes, I am serious. LiLou is America’s first therapy pig, recruited into the team of animals, mostly dogs, but also cats and rabbits, who spend time wandering about the airport. Their job is to calm down stressed passengers who arrive with screaming children, lost luggage, missed connections – all the little things that go wrong with air travel, and that are getting worse. 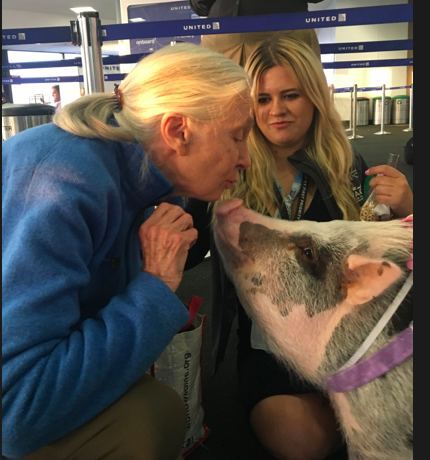 I knelt down to greet LiLou, even before greeting Tatyana Danilova, her owner, and Anil who described himself as LiLou’s Dad. Lilou and I enjoyed a snout to nose greeting. She also greeted Mr. H who seemed to fascinate her. In front of the crowd that soon gathered she demonstrated how she can play the “piano”. She can also play ball and pirouette, as well as wave goodbye with a trotter, and sit and lie when told. Each time she gets a little reward – a cheerio or almond, or one of the grapes I had brought off the flight (not knowing she loves them!). A small group of people soon gathered around, taking photos. They were all smiling. Enjoying a gentle snout-to-nose greeting with LiLou.

Tatyana acquired LiLou as a pet, with no intention of training her to be a Therapy Pig. Lilou has her own little house in the garden, with piles of blankets to snuggle into and lots of soft toys to play with. But she spends much time in the living room, enjoying cuddles and back scratches with Tatyana. She is a Juliana breed of pigs. While she is currently about 60-70 pounds, Lilou will grow some pounds bigger in weight, since pigs reach maturity at 5 years old. She will stay below the knee height, but will be more dense and curvy with additional weight. Many people have unrealistic expectations when they get a pig and expect them to stay small, which isn’t necessarily the case.

In addition to her monthly airport visit she also visits nursing homes bringing smiles and joy wherever she goes. She is part of a program of the San Francisco Society for the Prevention of Cruelty to Animals, the “Wag Brigade” – mostly dogs, but also rabbits and cats. They go through rigorous training to ensure that they will be the perfect solution for calming harassed or nervous passengers – – and, more importantly, that they have the right personality, are people-loving and will not be stressed.

LiLou began showing off her piano skills to a growing crowd. I am especially glad that LiLou is showing more and more people just how intelligent pigs actually are, which makes their treatment on hog farms so utterly horrific. Trapping sows in “farrowing hoops” so they cannot turn over and crush their babies (which never, never happens when a pig is allowed to be a pig, and make a nest. They are wonderful mothers.) Their sense of smell is amazingly acute – after all, they have been used to sniff out truffles in France for decades – so just imagine the torture for them when they are crowded together in intensive farms, forced to smell and lie in their filth. Worst of all, after the last drive to the slaughter house, because they are so intelligent they understand the danger they face when they hear the screaming of other pigs being killed. Luckily, Lilou is an example for many people to understand how impressive pigs are, and to think more thoroughly about their treatment.

There is a second therapy pig in America who operates in the Albany airport. He is a potbellied pigcalled Bacon Bits! At first I was appalled by the name, but then I realized it was clever – for if people fall in love with this pig they are likely to be horrified to think of other pigs, each with their own personalities, being tortured on hog farms and turned into bacon. 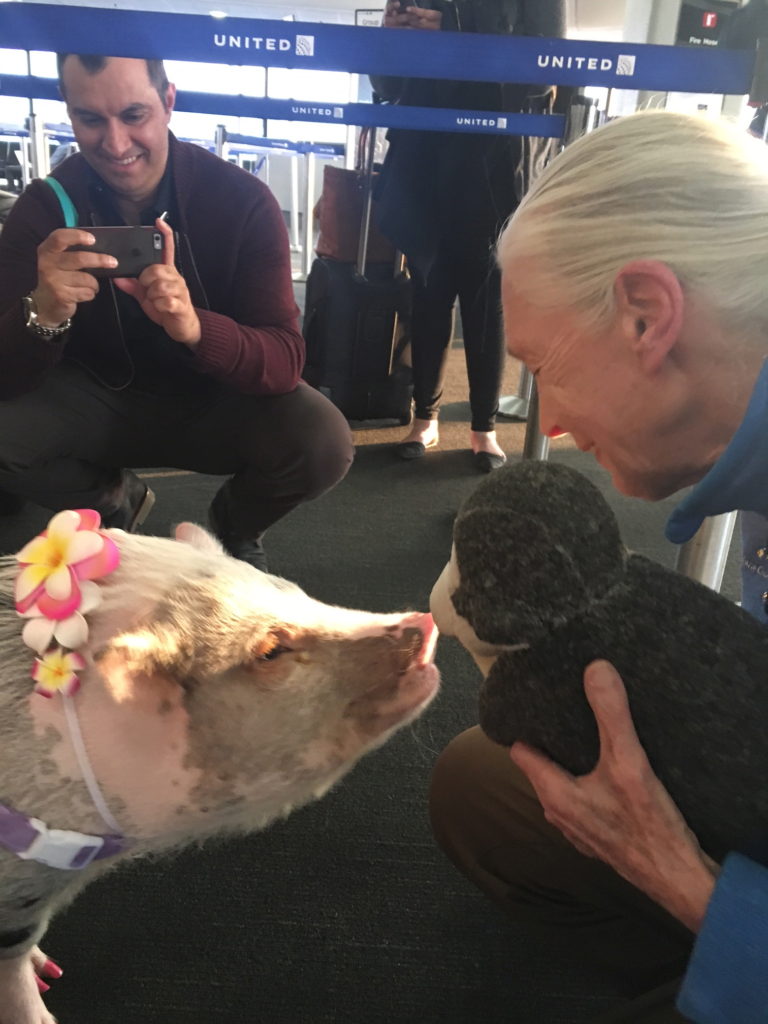 LiLou was, as I said, seemingly enthralled with meeting Mr. H. I have always loved pigs. The very first animal I ever habituated was Grunter, part of a small herd of saddlebacks, rooting in a field. They were scared when I approached, but after sharing my apple with one of them every lunch time during my week’s holiday, Grunter was lured closer and closer, eventually took the treat from my hand and, oh bliss, allowed me to scratch his back!

A while back, before my life became so absurdly busy, I put together “An Anthology of the Pig” – the pig in literature, art, history – I even wrote two original short stories. I found so many lovely piggy tales, some about invented characters such as Doctor Doolittle’s Gub Gub, and Wilbur of Charlotte’s Web. Then there are the true stories such as the one about Lulu the pet pot belly pig who broke out of the garden when her owner had a heart attack, and stood in the middle of the road until someone stopped and followed her back into the house. An ambulance was called – and it was just in time to resuscitate her successfully. The only sad part of the story was that Lulu was not allowed into the ambulance! There are many, many stories about pigs. If you have a good one, please share it with us.

One last snout rub for the road . Thank you LiLou for giving me such a wonderful welcome, that I shall never forget. 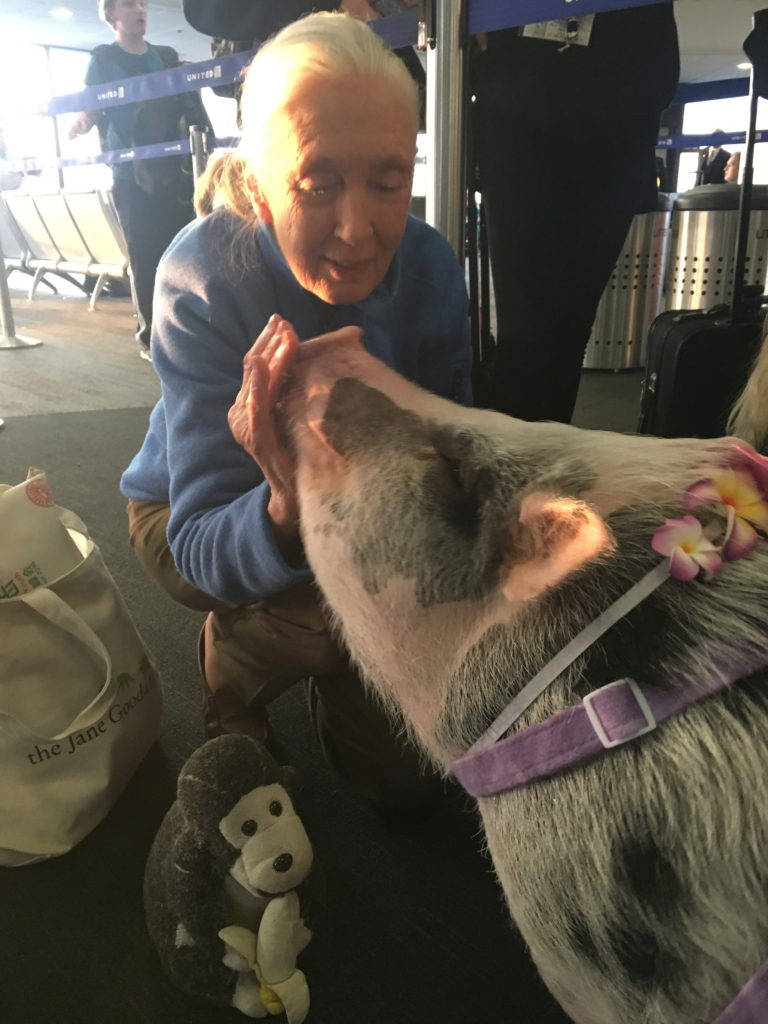