You are at:Home»Conservation»JGI Jungle Journals : Notes from Gombe, Tanzania III

Dr. Jane Goodall had a single dream: to study wildlife in Africa. When she was 26 years old, she was given an opportunity, by a innovative scientist named Louis Leakey, to achieve this dream in a place called Gombe. Gombe, Tanzania, has since Dr. Goodall’s studies been the home of ongoing behavioral, biological, conservation and other research on wild chimpanzees (Learn more about Gombe here). Many exceptional minds have passed through Gombe, providing their own imprint on this significant location, leaving with a reshaped imagination.

A change of habitat today.  Late yesterday the big group traveled out of Kakombe Valley south through Mkenke and into a little draw called Busambo. I would call this mixed wooded grassland with scrub vegetation.  The low ridge provide beautiful views and easy walking, so unlike the steep vine tangled terrain common to much of Gombe.

As I climbed east up the ridge south of Busambo, I heard the familiar calls of the big group; kids screaming as some bully displaces them from their feeding spot, food grunts of content chimps feasting on a bountiful selection of fruit, and choruses of pant hoots from up and down the valley.  Each chimp of course has a district voice, so when a chimp calls, she or he is letting everyone else know where they are and sometimes what they are doing (eating, traveling, etc.).  I used to know the voices of all of the adult males, and several females; but that took a lot of practice and most of those individuals have died.  I can still distinguish male from female voices though, and I know Sheldon, and Gremlin’s voice.  Neither were calling this morning.

I decided to drop down to the closest group and immediately ran into Faustino, Fundi, and Sampson who were just climbing into a beautiful Msalasi tree.  Up the south ridge, several females had spread out and were either resting or chewing on the thick grass stems of this year’s lush new growth.  It’s funny, from the time I was little I enjoyed chewing on grass and sucking out the sweet juice; this is exactly what chimps do and the grass here is especially juicy and sweet during the middle of the rainy season. 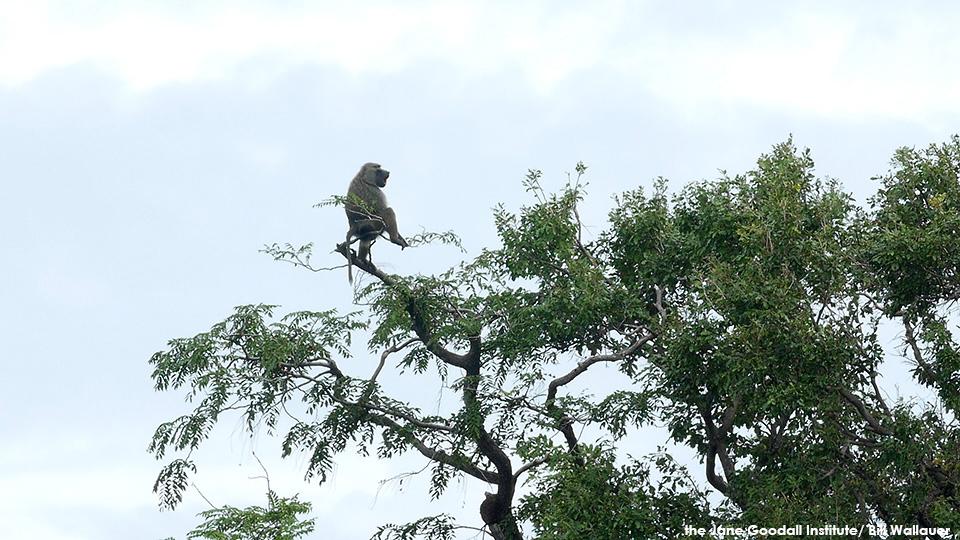 Far across the ridge I had just descended, I spotted a male baboon sitting in the very top of a tree (mbula I think). It was cool to watch him because he was waa-hooing (typical contact call of baboons) over and over.  I could see his mouth move, and half a second later I would hear his call. I got a few shots of this, which I think came out pretty well.

Just below me, I saw a tiny chimp building a play nest in the top of a leafy tree. I had a perfect little window and just seconds to shoot, but managed to get some nice images before he climbed unsteadily down and into his mother’s arms. I am not sure who this was, but a short time later, I found Tanga, one of the five females with new babies I am trying to document. 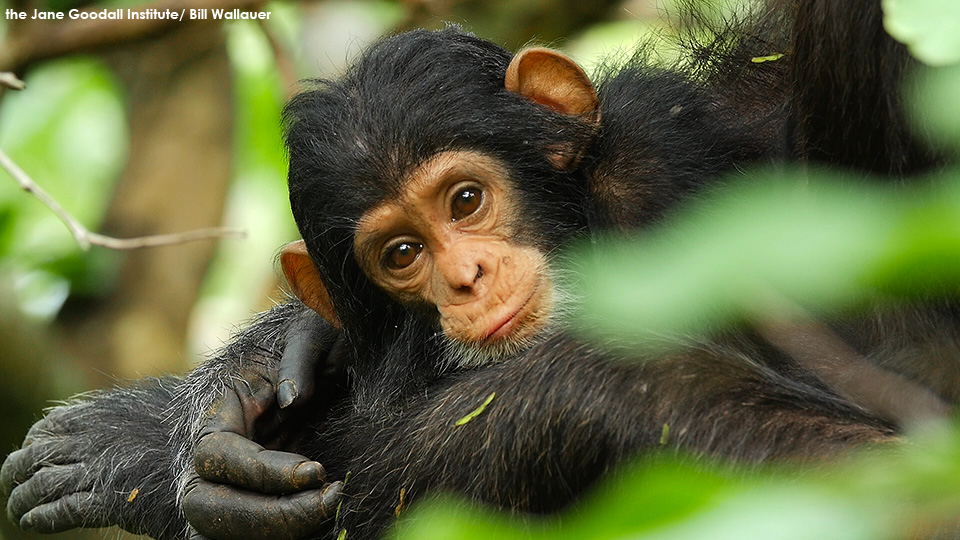 Tanga, Patti’s daughter, is a chimp I have known since she herself was a youngster. It is so much fun to see chimps I knew as infants raising their own kids.  I enjoy looking for similarities and differences in the females I spent so much time with in the 90’s and early 2000’s with the next generation of mothers. Today, Tanga did something the F family females was well known for doing; she held little Turwa up by one foot, stretching the laughing infant upside down and dangling him back and forth. How awesome it would be to have hands on your feet. Tanga was lying on her back in a thicket as she did this, so I just managed to get a shot of Tanga’s foot wrapped around Turwa’s ankle, but it was great behavior and as often the case, I see way more than I can actually record in images. 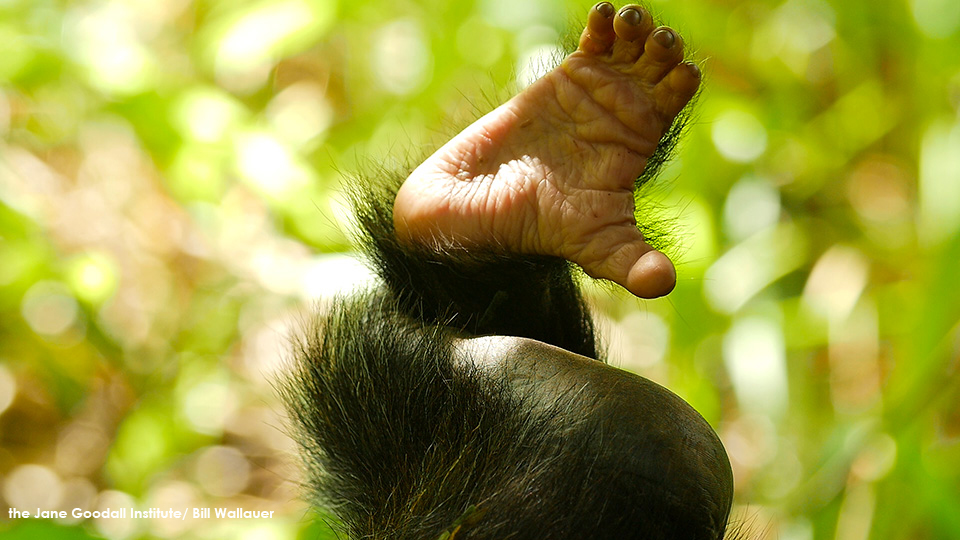 Turwa is seven months old which means he never strays more than a few feet from Tanga, either on the ground or in the trees.  As she lay on her back, she herself maintained a delighted play face as she gently rocked Turwa’s head back and forth with her hand. Turwa ‘attacked’ his mom by play biting her fingers.

It is incredibly cathartic to sit and watch the clear affection shared between mother and child; a connection that can only be described as love and which I believe is and shared right through the animal kingdom. I think it is funny when people assume these kind of ‘complex’ emotions and are unique to us. We have these feelings because the bonding nature of affection and connection to one another is crucial for our survival, both physical and mental. 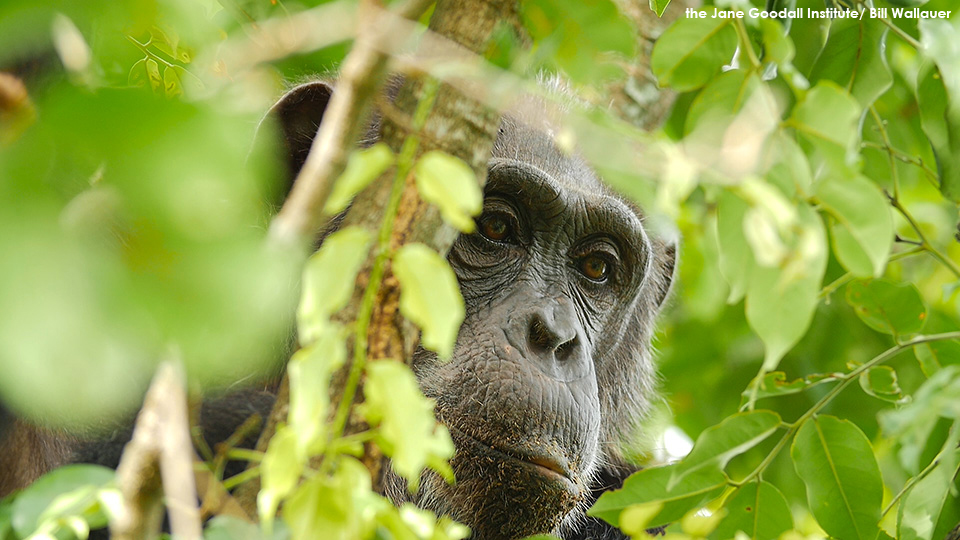 Tanga split her time between resting on the ground, or in a tree.  At one point she approached alpha male, Fudge, and submitted softly, then turned her back to him and positioned herself to be groomed. Fudge complied. Through the grass I was able to get a few more shots of Turwa. The bountiful grass often crossed right across her eyes or hide most of her face.  Deep breaths and patience are the key here. Turwa finally lay down on her back next to her 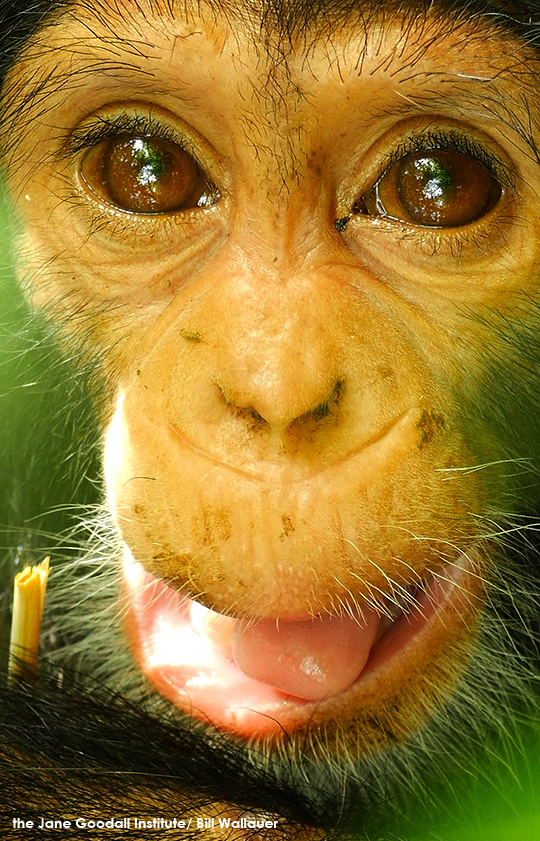 mother and I managed to get one close up of her face. These are the challenges I live for.

Tanga climbed up into the warm sunlight to rest and I quietly circled around searching for tiny windows through the leaves for an unobscured shot. Turwa was very active and adventurous. She climbed to a distance away from mom that pushed the limits of her confidence, often looking back for reassurance, then dangled by one arm spinning one way and then the other.  Like Grendel, many sticks and leaves when straight into her mouth when she was able to break them off.

When a conflict erupted nearby, Tanga quickly reached for a startled little Turwa and scoop her up, shot to the ground in one graceful swing, and vanished into the long grass. I thank her to myself as I watched the long grass sway back and forth with her passing.

Stay tuned for more from Bill’s journey to Gombe, and support our primate research and conservation at JGI here.