You are at:Home»Seriously Good For All»Where Wildlife Are in Danger, There Exists a Thin Green Line

You may have heard of the term “wildlife trafficking,” in the context of graphic imagery of elephants being brutally murdered for their tusks, or piles and piles of the fins of sharks drying on the concrete. Public demand for wildlife and wildlife products has resulted in a boom of illegal trade, that is quickly pushing endangered species toward extinction. Working on the ground in preventing the tremendous loss of life is a fight against extreme danger and cruelty. It is because of the heroism of Park Rangers, that so many have been saved. Their stories, however, rarely get the same kind of publicity or reverence they deserve.

We spoke with the President of the International Ranger Federation & Founder/Director of The Thin Green Line Foundation, award-winning conservationist, documentary filmmaker and Park Ranger himself, Sean Willmore. His insight and experience working with Park Rangers is essential in our understanding of both how illegal trafficking is injuring humans and wildlife in unbearable ways, and how much we owe these brave individuals for protecting precious species and their habitats. Our hope is that through his eyes we are able to better see a path toward ending this tremendously harmful trade.

Why are you passionate about ending wildlife trafficking and why should others care about this issue?

I’ve been fortunate enough to walk with Park Rangers in some of the most beautiful, but also threatened,  protected areas on the planet. In India, I’ve seen tiger prints so fresh by the riverbank that the water was still draining into the freshly made tracks. Baby gorillas have approached and played with my shoelaces in the rainforests of Uganda.

I’ve been lucky enough to survive an elephant charge attempting to push our vehicle off a cliff, and otters have swam in front of me on their backs, cracking shellfish open on rocks. I’ve witnessed five fully grown male lions roar together in a territorial warning from just 10 meters away, my skin shaking from the vibrations of their calls. I’ve swam with dolphins and seals as they played and jumped around me in the wild for nothing more than fun.

There are so many beautiful and enriching experiences like these, which have not just added to my life’s experiences, but are a part of who I am.

Sadly however, I have also experienced the tragic opposite. I’ve walked in forests where all the animals have been poached and there are no fresh prints, no animal calls, and no possibility of a wild animal around the next bend. I felt sad and empty for the loss of life and energy. I was poorer as a person for it.

Aside from these amazing, enriching experiences and the innate desire to protect nature and all animals, wildlife trafficking directly results in the loss of life of my colleagues, the Park Rangers.

112 were lost in 2016 that we know of, and over 1,000 have been killed in the last 10 years. Tragically 75 percent of rangers were killed as a direct result of poaching and wildlife trafficking, many murdered by the poachers that they were attempting to stop. So you might say that I have over 100 good reasons each year to make me want to stop wildlife trafficking.

What do you do personally to help end wildlife trafficking?

I was myself a Park Ranger in Australia and now I’m Founder and Director of The Thin Green Line Foundation, of which Dr. Jane Goodall is a proud ambassador. We work to equip, train and support Rangers fighting on the front line of conservation, predominantly in conflict zones and developing countries. We also give direct support to the widows and families left behind. 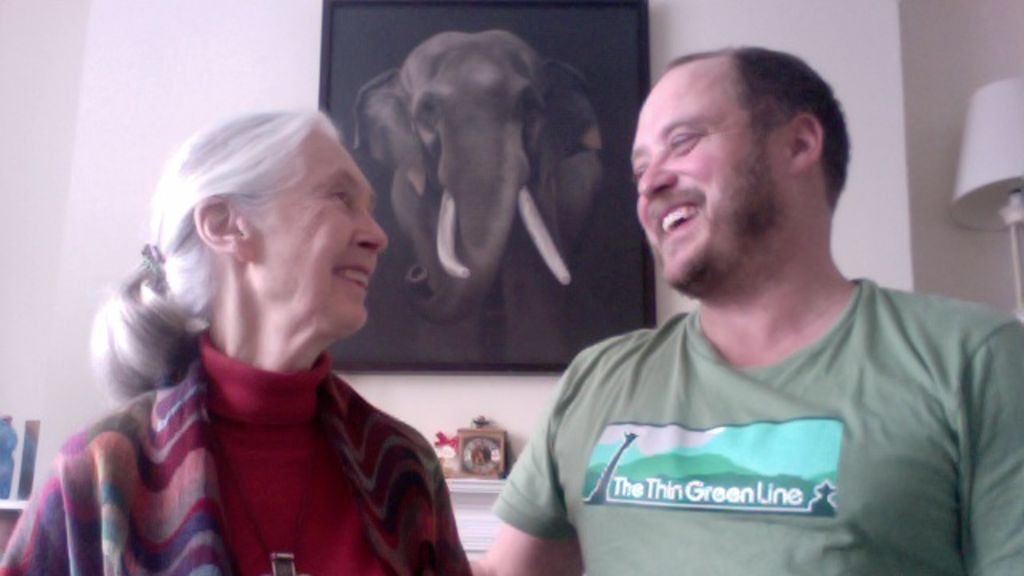 Sadly, this is often their only compensation. Many of the Rangers that we work with are in high value conservation areas, which coincide with animals, timber and minerals that poachers wish to extract for monetary gain.

Supporting these brave men and women, the front line heroes of our conservation battle is the most direct way that we contribute to ending wildlife trafficking. Whilst we also support demand reduction initiatives and those impacting on the transport of wildlife products, unless we stop the killing on the front lines at the same time there will simply be nothing left to protect.

As Dr. Jane Goodall herself said, “it is the missing piece of the puzzle in conservation, protecting endangered species and nature itself. We must all come together to ensure we protect the Rangers themselves on the front line.”

What provides you with hope in examining this issue?

The Rangers that I meet on the front lines continue to inspire me every day. Their dedication, bravery and humility in the face of harsh living conditions, low pay and danger is almost unbelievable.

They are true heroes. However, they cannot do it on their own – they urgently need support in their battle and the world is slowly waking up to this fact. It is my hope that with more support from the general public, the world will be able to have an ever more professional and strong Ranger force well placed to combat wildlife poaching.

What do others have to be hopeful about when it comes to ending illegal wildlife trade?

Sean Willmore of The Thin Green Line Foundation meets and thanks the vital rangers of Virunga National Park in the Democratic Republic of Congo.

I would like people to know that they can be part of the solution. No matter what they do in their everyday lives, they have the power to help. Even if they are not out in the field with the Rangers, they can be their allies and get behind them on the front lines. They can help put a stop to the senseless killing of wild animals by supporting the Rangers.

These Rangers are often the first and only line of defense for our wildlife, so the more that we can support them and build their capacity, the better chance that we have of winning this battle before it is too late.

You can learn more about Park Rangers and the Thin Green Line here.

In response to the heinous conditions created for wildlife and humans, now only growing due to wildlife trafficking, we’ve launched Jane’s Traffic Stop. We want you to be part of it.