You are at:Home»Youth Power»Roots & Shoots Project of the Month (POTM): Simon Says, Get to Know Your Community Partners

These are instructions that may sound familiar to most people since “Simon Says” is a staple childhood playground game. That’s exactly what children in an after school program in Gallatin, Tennessee thought when they challenged local adults to some games to find some common ground — quite literally — some of these adults may have played a game of Simon Says or Capture the Flag on this same ground many years ago. They figured it was about time they stop taking steps backward in their community and start to get to know each other.

Play makes learning a natural and positive experience, so much so that children often don’t even know that they are learning. It bridges across all categories: age, background, circumstances — you can even play with someone who doesn’t speak your language! Play allows you to interact with your environment, conquer fears, and explore interests, creating a sense of trust between those involved.

Recent media attention has been highly focused on the flaws in law enforcement, in particular towards marginalized communities. Being bombarded by these news stories without any personal interaction with law enforcement can create a skewed vision of their intentions. The young people of Gallatin could see this barrier becoming wider and used the recent attention as fuel to the fire in rekindling community relationships. Roots & Shoots group, Children Are People (CAP), organized a “Day of Play” with a little help from local firefighters to keep that kindling ablaze.

Director of Special Programs, Dee Kimbrell, spearheaded this Day of Play with all grades enrolled in CAP, ages 6-20, another reminder that no one is too old to play. Dee found some direction through her participation in the Jane Goodall Roots & Shoots free online course, “Growing Compassionate Leaders: Empowering Youth Through Service and Education”, creating a project that is a perfect example of finding compassion for those around you. This isn’t the first project CAP students have successfully executed with their community in mind; they recently put on an Adopt-A-Police-Officer campaign to create a positive image of police amongst at-risk youth. They have even organized a community wide bottle cap drive to collect caps that they later used to create a mural made entirely of recycled materials.

Children Are People was founded by Gallatin native, Fred Bailey, with an aim to provide after school mentoring, tutoring and guidance for at-risk youth. Being highly supported by the adults around him in his childhood, he made it his mission to make a similar impact on these young people. He emphasizes that one should never use their circumstances as an excuse for not achieving success.

“Life does not care about your circumstances. Life demands that you ADAPT and ADJUST”, says Bailey.

The statement “children are people” seems like a no brainer, yes of course we know they are human. But the extra step that people often don’t take is treating children as equal members of the community, welcoming them into important conversations or introducing them to adults around them. Often times the only adults that children get the chance to interact with are their parents and teachers; both of whom have roles in instructing them in their daily life. But what about the adults who aren’t trying to instruct them, the ones who just want to interact with them personally? CAPS wanted to focus on facilitating interactions with public servants whose work goes grossly under-appreciated or misrepresented.

During the CAPS Day of Play, each grade level of students in the CAP program was paired with a member of the community to simply play with. The adults brought the children into their world by sharing with them their careers and the children in turn beckoned them into theirs by the act of play.  Even the environmental impact was considered in this Day of Play, as recycled cardboard was the only material provided for the games. 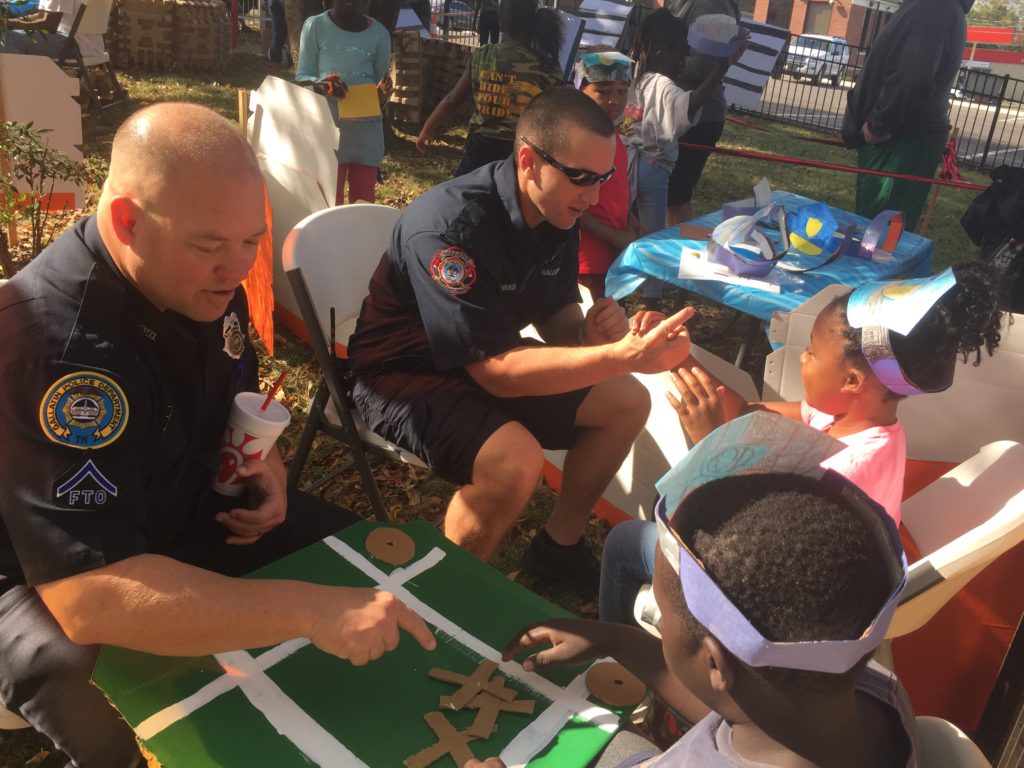 Above, police play Tic-Tac-Toe with the students, one of the “sentences” the adults could choose to serve for being “arrested.”

Kinder and 1st graders were paired with firefighters and ran a “Put Out the Fire Relay” while 2nd and 3rd graders played “Cops and Robbers” with a cop in the flesh. And get this, the punishment for the adults once they had been arrested was to choose from a list of 5 positive activities to do with a child- friendship mission achieved! 4th and 5th graders created tank tires to race against the Armed Forces and 6-8th graders teamed up with the Road Crew to construct a roadway puzzle. High school students got their paws dirty constructing a photo booth to raise money for their furry friends at the Sheriff’s Animal Shelter. And the Academy Class crafted a cardboard version of Operation with a body that looked remarkably like the founder himself. After all, what better way to figure out what you want to be when you grow up than by playing nursery games with all of the living, breathing examples.

This project is a 2015-16 Mini-Grant Recipient. To find out how to receive a mini-grant from Roots & Shoots, click here.