Warner Bros. Pictures just recently released their own version of Edgar Rice Burroughs’ famous story, Tarzan of the Apes. The film tells the action-packed story of Tarzan who, after 10 years of living in civilized society, returns to Africa with his wife Jane. 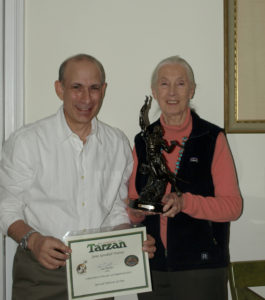 Jane and sculptor Joe DeVito, with a custom sculpture of Tarzan. This time however, Dr. Goodall is his Jane.

Tarzan’s story was a big inspiration for Dr. Goodall when she was a young girl. There was no blockbuster movie for Jane to watch when she was little, so she read the books. In the books, Tarzan is the Lord of the Jungle. The son of English noble parents who were marooned on the west coast of Africa, Tarzan is adopted by apes when his parents die. He spends his life living among them, protecting them and having grand adventures.

When, as a young child, Jane read about Tarzan’s adventures, she herself began to dream of going to Africa to live among the apes. Burrough’s stories of the African forests sparked her love for that wild world. Jane also developed a bit of a crush on Tarzan, and thought she would be a much better partner for him than the Jane that he chose. “Silly man,” she says. “He married the wrong Jane.”

Although she was never Tarzan’s Jane, Dr. Goodall did fulfill her dream of living among the apes. Famed anthropologist, Louis Leakey, had been looking for someone to study chimpanzees in the wild when he met Jane and the rest, as they say, is history. What began as the love of a story turned into decades of groundbreaking research on chimpanzees that redefined our understanding of both them and us. From her discovery of tool-making behavior to her establishment of the Jane Goodall Institute, and wide-ranging programs to protect chimpanzees and their habitat, Dr. Goodall has had a profound impact on the world. We have Tarzan to thank for starting Dr. Goodall on the path to becoming the prolific scientist and dedicated conservationist she is today!

Header image is from the picture book Me…Jane © Patrick McDonnell.