You are at:Home»Primates»Recent Science Roundup

After over 50 years of studying wild chimpanzees at Gombe National Park, Tanzania, as well as 20 years worth of research at JGI’s Tchimpounga Chimpanzee Rehabilitation Center in the Congo, scientists continue to discover new and exciting facts about our closest living relatives. In this recent science roundup, we share some of the more exciting discoveries from the past few months.

Low-Ranking Ladies Band Together at Gombe
Low-ranking female chimpanzees spend more time together thank other chimps.
Female chimps at the bottom of the social totem pole stick together more than their high-ranking peers, a new study from the Gombe Stream Research Center has found. Why these unrelated, low-ranking ladies spend so much time together is still up for debate, but researchers have some ideas.

While male chimpanzees socialize often with one another in the communities they were born into, female chimps live relatively solitary lives and are known to emigrate from their homes to new communities. Their most common companions are children and perhaps a sister or mother, but “new girls” that immigrate into a community usually do not have these familial bonds to rely on for support, protection and affection. Duke University’s Stephen Foerster and Anne Pusey proposed that low-ranking females at Gombe may band together to support one another against the aggression of high-ranking females who bully them. Pairing up could also mean pooling resources when it comes to sharing food or looking out for predators.

The study cannot yet say whether these “friends” actually like one another. The researchers plan to examine whether these relationships deteriorate with change, and signs of stable relations could indicate actual bonds of friendship rather than associations of necessity.

You can read more about the ongoing study on Duke Today.

Chimps Could Cook if Given an Oven 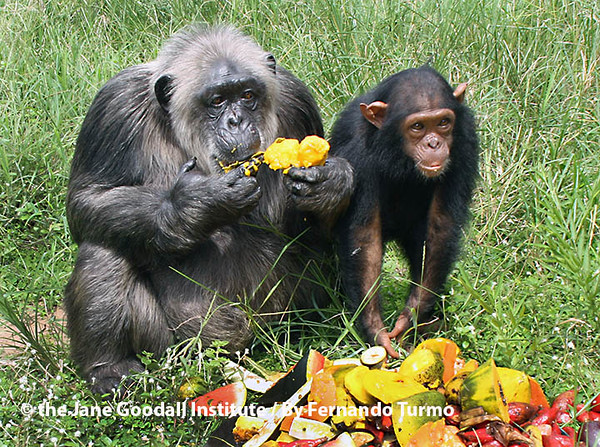 While Jane Goodall upended the notion that man is defined by his ability to modify tools when she discovered that the chimpanzees at Gombe also did so in 1960, another theory has always separated man and his closest living relative: man’s use of fire. Humans’ ability to cook food represents a milestone in their evolutionary changes in behavior compared to chimpanzees. But recent studies by Harvard and Yale scientists at JGI’s Tchimpounga Chimpanzee Rehabilitation Center in the Republic of Congo shows that chimps may have the foresight and patience to wait to eat raw food until it is cooked, like humans.
Ethical constraints prevented the scientists from giving chimps ovens and fire in the experiments. But Dr. Felix Warneken and Dr. Alexandra G. Rosati found that chimpanzees at TCRC would take raw sweet potatoes and resist eating them in lieu of putting them in “magic cooking devices” — a double stack of bowls with cooked sweet potatoes hidden in the bottom. The chimps preferred handing over raw food and waiting for researchers to open the shake’n’bake cooking devices to reveal cooked sweet potatoes. This shows that chimps possess a potential mental foundation for cooking, making them even cognitively closer to man than previously thought.
You can read more about the experiment in the New York Times.

A startling new discovery of a gene in Gombe chimpanzees shows a genetic similarity between chimp and man in their abilities to fight off viruses like HIV/AIDS. While examining Gombe chimp fecal samples, postdoctoral researcher Emily Wroblewski discovered a new gene in chimpanzees for the “major histocompatibility complex” (MHC) — a protective molecule on cell surfaces which helps the immune system recognize foreign bodies like viruses. The MHC gene in chimps (known as Patr-B_06:03) closely resembles an MHC gene in humans (known as HLA-B*57:01) that allows people with HIV to keep their virus in check for years without drugs by maintaining low levels of the virus over time.
Wroblewski studied more fecal samples and found it harder to detect SIVcpz, the predecessor to HIV, in chimps with the protective gene. Genetic analysis also shows an increase in the gene’s presence in Gombe chimps over the past decade — possibly a result of natural selection at work, as those without the protective gene died early on from SIVcpz. Because chimps with the MHC gene live to pass it onto their infants, the gene could be more prevalent in recent generations, offering hope for youngsters in highly infected communities.
You can read more about the new discovery on Science Magazine’s blog. 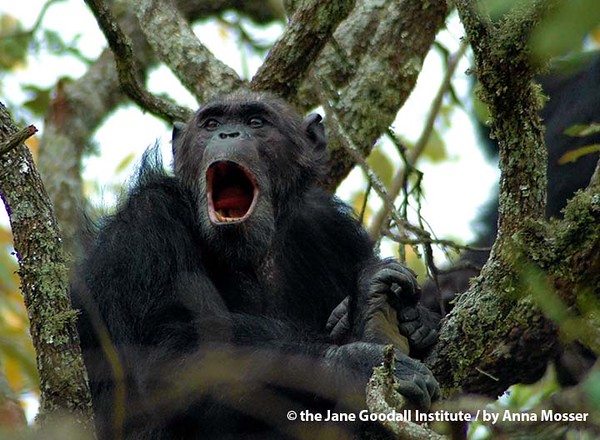 Chimpanzees have vast auditory means of communicating with one another, from loud pant-hoots of excitement to quiet laughs while playing. A study of over 10 hours of adult chimpanzee vocalizations collected in Gombe from 1971 to 1973 has recently been made available, covering chimps’ entire range of possible vocalizations. A breakdown of the 605 recordings shows a wide range of 41 call types observed in adults, from grunts and hoots to cries and sighs. The data package can serve as a useful tool for future studies on the evolution of human language. Those interested in knowing more about chimpanzee communication can use the long-term study of the same chimpanzees to examine their use of auditory signalling when referring to something, known as referential signalling. And future studies could also use the data to look into the emergence of dialects over time. The recently released data package accompanies a 2014 package of immature chimpanzee vocal recordings.
You can learn more about the specifics of the data package published in Scientific Data at Nature.com.