You are at:Home»Seriously Good For All»Research in Gombe is OFFICIALLY Guinness’ Longest Chimp Study!

The research of our founder Dr. Jane Goodall is legendary, as her fascinating and trailblazing discoveries on the lives of wild chimpanzees in Gombe, Tanzania shook the foundations of the scientific world – but the story only started with Jane! Research in Gombe has been going on since the early 60s, when Jane helped the world better understand our relationship and similarities to our closest living relatives. That research, for over 58 years and counting, has continued and evolved, and is now Guinness World Records OFFICIAL! JGI’s research in Gombe is the Longest-running wild chimpanzee study on the planet!

Dr. Goodall’s studies in Gombe have produced some of the most transformative insights into the animal kingdom, including the realization that chimpanzees make and use tools – something previously thought to be exclusive to humankind. Nearly 60 years later, with more than 165,000 hours of observational data collected, JGI researchers and scientists from around the globe are still bearing witness to major discoveries in Gombe, a UNESCO Biosphere Reserve.  Perhaps most impressive, the studies have followed generations of families stemming from the original and beloved F and G groups that Jane came to know so well. The “B Record” as it’s called, is a living research record of the incredible things we’ve been able to observe over lifetimes of chimpanzee groups and families, and all we continue to learn today.

From the importance of social play in chimpanzee infants, to chimpanzee hierarchy and disease, we’ve established a wealth of knowledge that is invaluable in its own right, which also has applications for interpretations of human behavior and human health. The site also serves as a foundational and inspirational beacon for women in science, and generations of scientists who have followed (and continue to follow) in Jane’s footsteps. The cultural relevance and impact of research in Gombe cannot be understated, and likely many fields outside of science have also been shaped by the ripples of this special place of discovery. 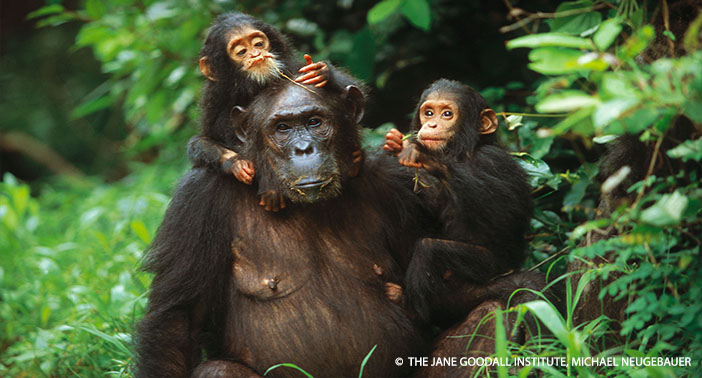 “Twins Golden and Glitter with their mother Gremlin at Gombe National Park in Tanzania. The twins were the first pair to survive past infancy at Gombe.”

Guinness World Records has also confirmed Golden and Glitter – two of the chimpanzees that live in the park (daughters of Gremlin) – as the oldest chimpanzee twins. Chimpanzee twins are very rare in the wild, and JGI researchers have been extremely privileged to be able to closely follow their growth and lives, even into motherhood as they both now have children of their own. One of them had twins herself!

Research in Gombe has certainly transformed since the 60’s, as has the world around it. When Dr. Goodall arrived in Gombe at age 26, with no formal higher education, she lived in a tent and used only curiosity, a notebook, binoculars, determination, and a typewriter to capture some of the most incredible discoveries in human history. “We had an ex-army tent to share… snakes, scorpions and all manner of creature could enter – and did! We had two little camp beds,” she recalls. Today, researchers are able to live in housing facilities, and the integration of tablets, GIS mapping, and more advanced tools and techniques for ecological, biological and primatological research has allowed for a robust and growing list of publications (over 500) and new insights every day. 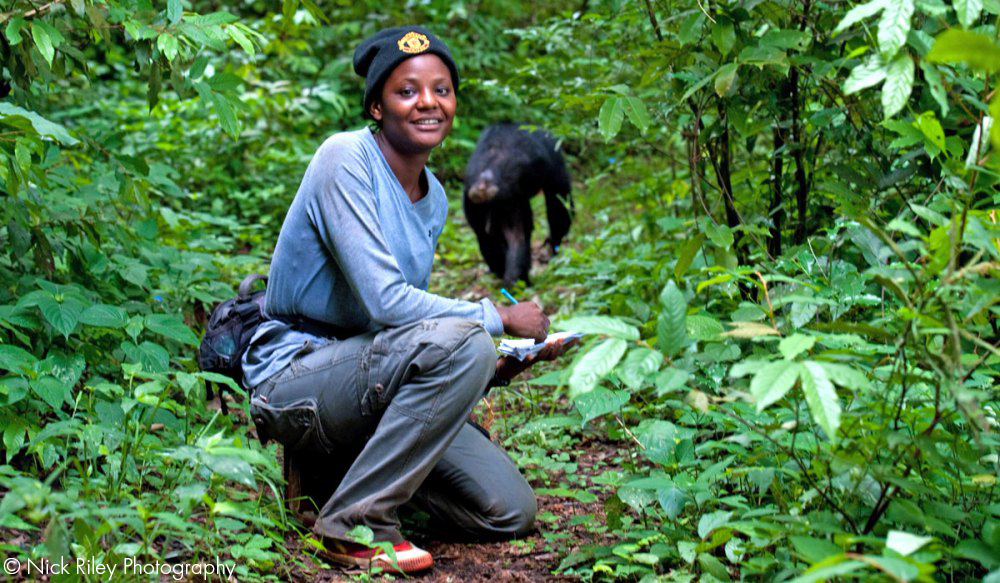 The work of the Jane Goodall Institute also extends far beyond Gombe, with many other programs across the chimpanzee range, and around the world. After Dr. Goodall opened the research station in Gombe, she began to see firsthand the increasing threats to the chimpanzees and their habitats in Tanzania and across Africa. In 1986, greatly impacted by a Chicago conference on the state of chimpanzees, Jane left field research to become an activist. JGI, now celebrating over 40 years of work, is a community-centered conservation organization intended to address the threats to great apes and their ecosystems head on by working in collaboration with local people. As Jane describes, “These are holistic programs that include suitable farming operations that do not destroy the soil, restoring fertility to overused farmland, shade-grown coffee, better health facilities and better educational facilities…” and are done in partnership with local communities.

What’s next? There’s plenty more to observe and JGI is certainly investing in the next generation of Jane Goodalls. Through JGI’s Roots & Shoots program, young people in nearly 100 countries around the world are becoming compassionate environmental stewards and curious learners equipped with the thoughtfulness and tools to take positive action in their communities. With young people committed to making a difference and learning about the natural world, we are excited for the next 60 years and the next 60 after that. 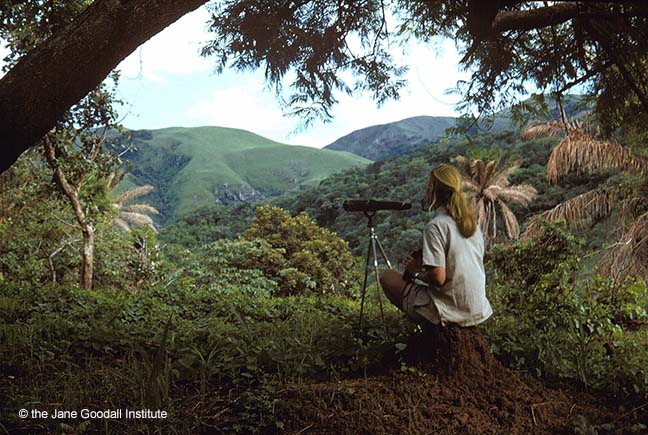 In her early days at Gombe, Jane Goodall spent many hours sitting on a high peak with binoculars or a telescope, searching the forest below for chimpanzees.

As we celebrate this great accomplishment, we also look to the future. We hope that with each of us working toward protecting these very precious places and the incredible chimpanzees, we will continue to discover wondrous and remarkable things for a very long time. As is often said, “Somewhere, something incredible is waiting to be known.” Will you be the one to discover it?