You are at:Home»Conservation»You Give Us Hope That We Can Keep Species ForeverWild !

Every day you live, you have an impact on the world around you, locally and globally. As we go about our daily lives, we may hear stories about species loss and feel disconnected or confused about what one individual could do about the problem. But there is something you can do today, and it will take all of us working together to make it possible. The illegal trade in wildlife threatens species, especially great apes, with extinction – it is the second biggest threat to wildlife after habitat loss. If it continues, we could face a world in which thousands and thousands of species are lost forever. That is why we’re joining together and asking all of you to participate in the Jane Goodall Institute (JGI) global chapters ForeverWild #4EverWild campaign! By becoming better informed, sharing what you know and taking action in support of JGI’s efforts, we can secure a future where wildlife can live safely in the wild.

This international campaign to raise awareness about wildlife trafficking, which is a major threat to the survival of great apes and other endangered species as well as to the world’s biodiversity, launches today and it’s up to you to make it count. International wildlife regulations prohibit trade in endangered apes for commercial purposes. Despite this and their endangered status (only around 340,000 chimpanzees remain in the wild), trafficking continues to bring in billions of dollars, and the endangered animals stolen from the wild become part of the illegal trade by the thousands every year.

At least 3,000 great apes, including orangutans, gorillas, bonobos and chimpanzees – which are all endangered species – are lost from the wild every year as a result of illegal trade. It is estimated that more than 22,000 apes were killed or captured to be sold between 2005 and 2011 (GRASP). They are hunted for bushmeat and for their body parts, as well as being captured live for the illegal pet market, disreputable zoos and tourist attractions. About two thirds of the apes lost are chimpanzees. This is only representative of incidences that are discovered – many more are likely stolen beyond what we know. 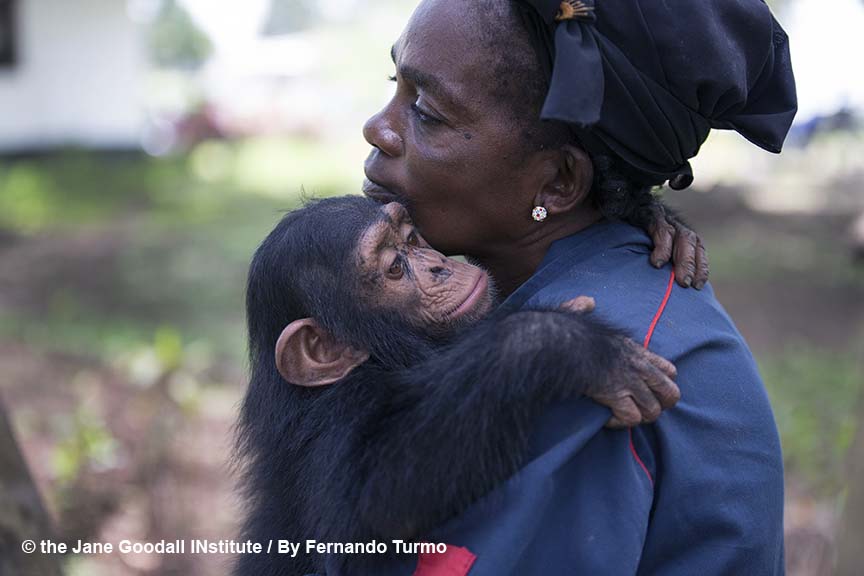 For the Jane Goodall Institute, fighting for great apes and protecting them from the illegal trade is a priority and central to our mission. The tragedy of the trade is something we face every day; we see survivors of the illegal trade in our Tchimpounga sanctuary in the Republic of Congo who come to us malnourished and traumatized with nowhere to turn. Three of our newest arrivals, George, Vienna and Kabi, were torn from their mothers arms, the eldest not even four years old. To work holistically to both prevent those threats and take in those injured and orphaned chimpanzees harmed by these illegal activities, our work at the sanctuary focuses on public awareness, while also making sure we never have to turn a chimpanzee in need away. Around the world, JGI is working with communities to end the illegal wildlife trade through local public awareness campaigns, sanctuaries for rescued chimpanzees, support and coordination with law enforcement, education outreach, and providing sustainable livelihood alternatives to hunting and trafficking.

Though the work to highlight the particular threat to great apes is something we have a passion for, every species is at stake – from elephants, to rhinos, to the precious pangolin (the most trafficked animal in the world). If one species is at risk, they are all at risk. As we face the Sixth Great Extinction, without a concerted global effort to end trafficking, primates and other wildlife will be gone for good.

During this campaign, JGI chapters will offer opportunities for individuals to become better informed and take action in support of JGI’s efforts to stop trade in endangered species and secure a future where wildlife can live safely in the wild.

Ashley Sullivan is the Communications & Policy Officer at the Jane Goodall Institute, where she works to connect individuals with Dr. Goodall's vision, and the JGI mission. Ashley graduated Stony Brook University with a B.A. in Anthropology and a minor in Biology, and is currently pursuing a MS in Environmental Science & Policy at Johns Hopkins University. She has a varied background including conservation, art, communications, digital media, design, photography, and documentary filmmaking. Ashley believes in sharing information to empower and in magic of storytelling to change hearts and minds. Through growing understanding and empathy, she believes it is possible to ignite positive change, every day.