You are at:Home»Primates»Meet Tchimpounga Sanctuary’s New Chimp: Kabi
In equatorial Africa, chimpanzees once roamed freely in the millions and the sound of pant-hoots echoed through the forests. But as human populations grew, as did the demand for illegal bushmeat, and the fascination with keeping chimpanzees as illegal pets. As an endangered species, their numbers now are only close to 300,000. To work holistically to both prevent those threats and take in those injured and orphaned chimpanzees harmed by these illegal activities, JGI set up the Tchimpounga Chimpanzee Rehabilitation Center in the Republic of Congo. As positive growth happens to end these threats, so still exists (though less so) those hurt most by it. This month, Tchimpounga took in a baby chimpanzee who was a victim of the illegal pet trade. His name is Kabi. 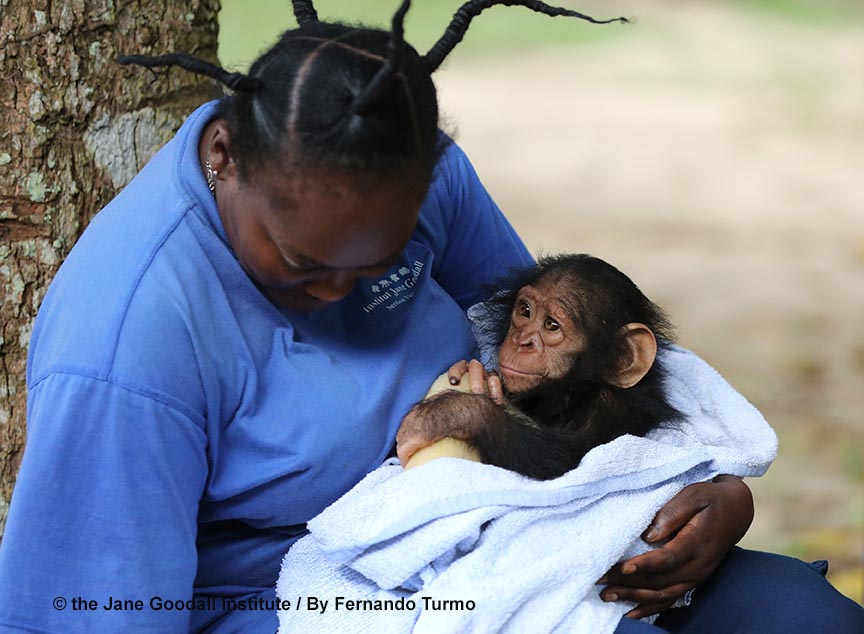 Kabi is a strong young chimp, and will be given all the love and care he needs to thrive. A caregiver, named Cristel, acts as a surrogate mom to Kabi and spends 24 hours a day with him helping him to heal. As he moves through this initial period of care, he will soon be integrated with other chimps so that he may be given the social stimulation and community to live happily once more. Eventually, he may even have the chance to be transferred to one of the Tchimpounga sanctuary islands, where he may roam in forests once more with other chimps just like him! 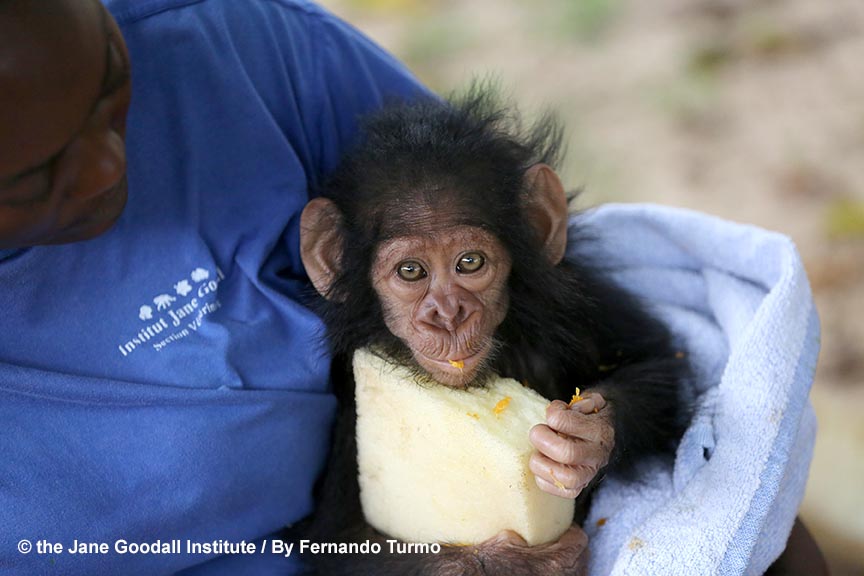 We want nothing more than to see Kabi thrive, but only you make that possible. Wounda, the now famous Tchimpounga chimp, came from a similar beginning – stolen from her family and forced into a life of fear and cruelty. But also like Kabi, Wounda was lucky enough to be rescued and recover. From suffering, she emerged in Tchimpounga as a spark of life, now alpha-female on a sanctuary island site exploring the forest with her baby, Hope.
Kabi’s life has been difficult, but as we see in Wounda’s story, Tchimpounga is a place for second chances. With your support as a Chimp Guardian, we can give Kabi the second chance of a happy, safe life he deserves.