This past winter, Dr. Rebeca Atencia (director of the Jane Goodall Institute in Congo and head of JGI’s Tchimpounga sanctuary), received a call from the Ministry of Water and Forestry to report that a baby chimpanzee had been confiscated. For Rebeca, though these calls are never ones she wants to receive, it was bittersweet relief to know that this young creature will be safe under her and the JGI staff’s care. This baby was about to find a new life and a second chance at Tchimpounga. His name is Vienna.

Vienna was named after the JGI Global meeting which was happening on the same day in the Austrian city of his namesake when he arrived. Dr. Rebeca Atencia wanted to name him Vienna to give thanks to all the JGI offices around the world which contribute to supporting Tchimpounga and helping it continue to keep its promise to never turn away a chimp in need. Upon arrival, the team of Tchimpounga caregivers quickly realized that this chimp is a very young – he is only a little over a year old. The team also noticed that tragically, one of his thumbs was amputated and the wound has already healed over into a scar.

Vienna was found in the region of Niari, a mountainous and biodiverse area of the Congo, and unfortunately, many of the chimpanzees taken in by the Tchimpounga sanctuary come from this area. Despite government efforts and interventions, poaching remains a significant issue in Niari and many areas of the Republic of Congo, and more broadly across the chimpanzee range in Africa. Chimps are killed or caught in traps to be sold off for the illegal bushmeat or pet trades. Stolen Apes, which was produced by the UN Environment Programme (UNEP) through GRASP, estimates that a minimum of 22,218 great apes have been lost from the wild since 2005 – either sold, killed during the hunt, or dying in captivity – with chimpanzees comprising 64% of that number. To combat this, much of JGI Congo’s work is in education, prevention and working with local law enforcement, which has been a successful combination. 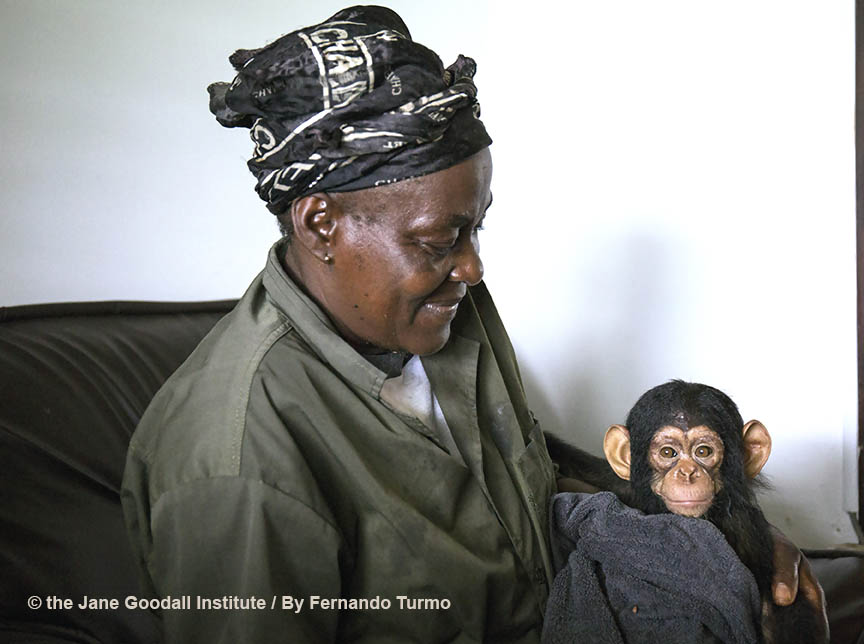 Antonette is the JGI caretaker who has been assigned to welcome Vienna and help him become comfortable with his new surroundings and home. Vienna, as he is still only an infant, is very dependent on Antonette and clings to her tightly. Vienna has very serious abandonment issues after being taken from his mother, and every time Antonette gets up from her chair, Vienna becomes nervous and starts to cry. To comfort him, Antonette squeezes him tightly against her chest, which helps quiet him and make him feel secure.

While Antonette prepares food, she wraps Vienna in a cloth on her back to help him stay put, as African women often do with their babies. This allows Antonette to do other tasks while Vienna sleeps and feels the warmth of her back and the beating of her heart. Vienna is a bit picky about food, and doesn’t like to drink milk with a syringe or a bottle. His favorite fruit are grapes and Antonette is very patient while opening him up to other fruit options little by little, to expand his diet.  Antonette spends 24 hours a day with him to make him feel loved and safe, and at night they sleep together in the same bed. To replicate what Vienna’s mother may have done, Antonette wakes up in the middle of the night to give Vienna a bottle of warm milk. 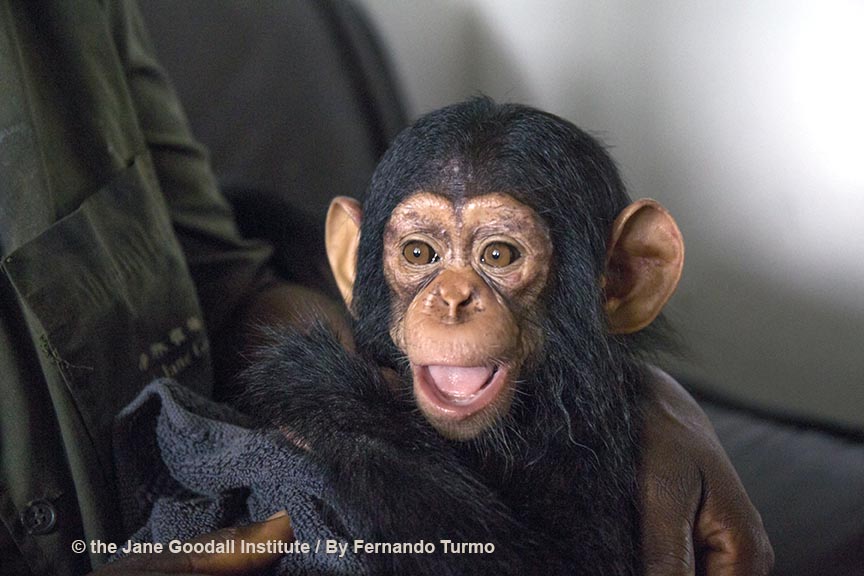 Though Vienna will never have his family back, he has everything a baby chimp could want in his new Tchimpounga home. When he has gone through adequate time with Antonette healing and becoming acclimated, he will be introduced to other rescued chimpanzees whom still reside in the main Tchimpounga sanctuary site. Alongside baby George, Tchimpounga’s other new arrival, he is sure to feel wanted, included, and loved, having the support to become a fascinating and dynamic adult chimp!

We want nothing more than to see Vienna thrive, but only you make that possible. Wounda, the now famous Tchimpounga chimp, came from a similar beginning – stolen from her family and forced into a life of fear and cruelty. But also like Vienna, Wounda was lucky enough to be rescued and recover. From suffering, she emerged in Tchimpounga as a spark of life, now alpha-female on a sanctuary island site exploring the forest with her young son, Hope.
The beginning of Vienna’s life has been difficult, but as we see in Wounda’s story, Tchimpounga is a place for second chances. With your support as a Chimp Guardian, we can give Vienna the second chance of a happy, safe life he deserves.

Fernando Turmo is the Jane Goodall Institute’s Image and Communications Coordinator and is based at JGI's Tchimpounga Chimpanzee Rehabilitation Center in the Republic of Congo. After working as an illustrator and designer in his home country of Spain, Fernando joined JGI in 2006 and became the resident photographer and videographer at Tchimpounga. Fernando loves bringing the stories of Tchimpounga’s chimpanzees to life through photos and video for all of JGI’s supporters. One of Fernando’s favorite moments that he captured on film was the chimpanzee Wounda giving Dr. Jane Goodall a hug after being released onto Tchindzoulou Island.