You are at:Home»Seriously Good For All»#IEatMeatLess For People, Other Animals, and the Environment

You cannot get through a single day without having an impact on the world around you. What you do makes a difference, and you have to decide what kind of difference you want to make. – Dr. Jane Goodall

Every day we live, we have the choice of what kind of impact we want to make. Choosing to eat differently does not have to be a complete upheaval in order for it to be completely revolutionary! In the spirit of that sentiment, we are asking every individual to consider the impact of a meat-based diet and the commercial meat industry on the animals we consume, ourselves, and the environment, especially around the holidays. As the popularity of alternative protein products grow with our demand, the availability of options makes this a happy, and exciting frontier of environmental and animal friendly foods! It’s time to claim, #IEatMeatLess, for you, other animals and humans alike, and for the planet!

As Dr. Goodall demonstrated through her chimpanzee research (and as subsequent animal research has revealed) we know that humans are not the only animals to have complex emotions and intelligence. Many traditional factory farm animals, like cows and pigs, have been confirmed to have impressive reasoning abilities, and often develop deep emotional relationships with other animals and humans. Dr. Goodall in fact stopped eating meat over 50 years ago when she realized that the factory farm industry was responsible for the suffering of millions of animals across the globe. These cruel practices are inhumane, and we must stand up against these transgressions and their place in our modern meat industrial complex. To choose a plant-based diet, decreased meat-based diet, and/or ethically or locally sourced diet, is an excellent way to eliminate the suffering of those animals who live an awful, hopeless existence on factory farms.

Reliance on meat consumption and the meat industrial complex is causing escalating damage on the environment and is a major contributor to climate change. Meat production is responsible for nearly 15% of global greenhouse gas emissions, “equivalent to exhaust emissions from all the vehicles in the world” (Chatham House). With a larger community of us choosing a plant-based vegetarian diet, we could cut greenhouse gas emissions by over 60%. (The Guardian). 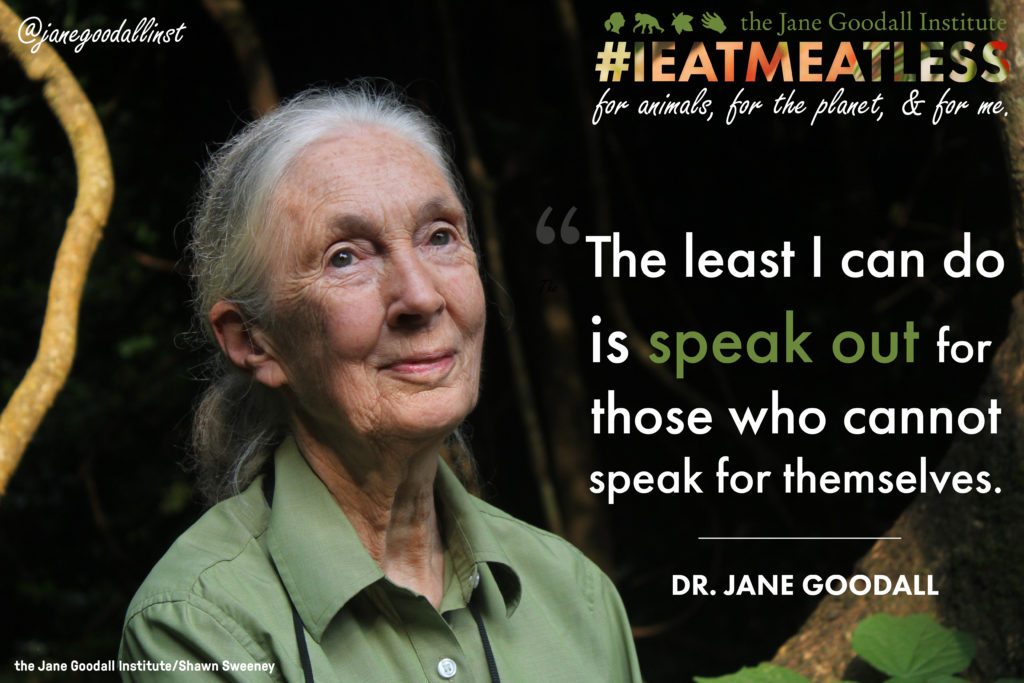 Beyond direct emissions, the meat production industry cuts down huge areas of forest to grow the grain to feed the billions of animals we eat each year, or to provide grazing (Mongabay) It also removes habitat from innumerable endangered species, like the chimpanzee. Over-fishing is also causing cascading extinction and ecosystem collapse in our oceans and lakes, with about 58% of the world’s fish stocks collapsed or overexploited (Washington Post). For the planet, and the species (including humans) already and soon to be affected by climate change, choosing a more plant-based diet is a potentially simple change that can help reverse some of the damage we’ve done to our planet.

FOR YOU AND ALL PEOPLE

Coupled with the mistreatment of animals in factory farms, some of the hormones and other supplements fed to animals may be passed onto us (Washington Post). Antibiotics are now supplied on a regular basis just to keep animals alive in the crowded and depressing conditions of the factory farms. Bacteria are building up resistance, and people have already died from simple infections that refused to respond to the antibiotics meant to cure them (Consumers Union). The health risks and complications of a heavy reliance on meat consumption have been outlined in multiple studies including potential linkage to alzheimer’s disease (JACN) increased obesity and diabetes, and according to the World Health Organization, there is an increase in the risk of several cancers associated with high consumption of red or processed meat (WHO).

As we move our consumer demands toward the production of less processed, less meat-based food, supply will follow, breaking down existing barriers to access. The more we are all aware, the more we are able to bridge this divide to fight the “inexpensive, high volume” food production, and a national infrastructure that “favors sales of highly processed food products for maximal industry profit.” (Harvard) It is important to encourage these choices which will not only improve health, but can even be more cost efficient and help remove the existence of food deserts through a greater investment in a variety of dietary and agricultural options in communities around the world! 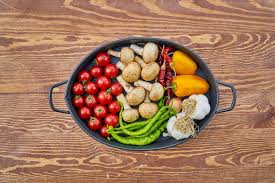 “You are what you don’t eat: eat less meat and join Dr. Jane Goodall and the Jane Goodall Institute in saying #IEatMeatLess for people, other animals and the environment! janegoodall.org/ieatmeatless_pledge @janegoodallinst”

#IEATMEATLESS PLEDGE
Don’t forget to take the #IEatMeatLessPledge: janegoodall.org/ieatmeatless_pledge and join us by reducing your meat consumption, and thereby reducing the negative impact food choices have on the environment, and other humans and animals, both locally and worldwide.

Dr. Jane Goodall and the Jane Goodall institute are encouraging every individual to think more critically and act more consciously regarding the consumption of meat and animal products for the sake of our planet and the other animals to whom we are inexorably connected. Whether we choose to give up meat entirely, or choose to live along the spectrum of reduced meat consumption, by choosing a more plant-based diet, we are each contributing to a world in which our dietary choices do not become our downfall, and our actions speak loudly and proudly for those who cannot speak for themselves.

Ashley Sullivan is the Community Engagement Specialist at the Jane Goodall Institute, where she works to connect individuals with Dr. Goodall's vision, and the JGI mission. Ashley graduated Stony Brook University with a B.A. in Anthropology and a minor in Biology. She has a varied background including conservation, art, communications, digital media, design, photography, and documentary filmmaking. Ashley believes in sharing information to empower and in the need for storytelling. Through growing understanding and empathy, she believes it is possible to ignite positive change, every day.