The power of a single story is immeasurable. When a young 26 year old woman from England traveled to Tanzania to study wild animals and share their stories, she transformed our understanding of our relationship to non-human animals, and what was possible for a woman in science, or in general. The reverberations of her story have echoed endlessly and caused the emergence of millions of other bold, unstoppable women.

In Honor of the Jane Goodall Institute’s 40th anniversary, the Hope in Action campaign calls upon people everywhere who have been inspired in some way by Dr. Goodall’s message of hope, to share their stories. We want to celebrate all of you who are leaders and drivers of conservation, environmentalism, innovation and positivity, making the world better for people, animals, and the environment. You move us, and it’s time to show the world what the future of green looks like!

How to put your hope into action: 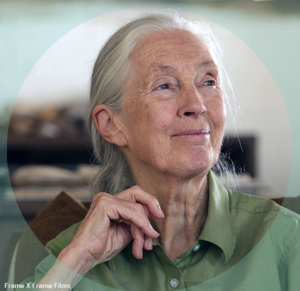 We’ve already received outstanding stories, many outlining how Dr. Goodall’s inspiration of peace and hope are revealed in the individuals, making a difference everyday. Today, for Mother’s Day, we want to share just how magnificently influential a single person exuding care and love can be for so many. Dr. Goodall’s own mother was the sun that helped young Jane grow, and someone Dr. Goodall consistently refers to as being a beacon of understanding, encouragement and compassion. It was Dr. Goodall’s mother who when young Jane brought earth worms to bed as a 2 year old, simply and calmly told her that they needed to return to the garden, or they would die – never dismissing or harming her curiosity, but instead watering her imagination. For all those heroic mothers who acknowledge all of the potential in children, and in people in general, and remain insistent in cultivating the most “true to one’s self” a person can be, we want the world to see you as we do by sharing your stories!

As Dr. Goodall began as one person with a mesmerizing story of perseverance, kindness and brilliance, so each of your stories begin. There’s no telling who they will inspire, or how that inspiration will transform the world creating a brighter future for all living things!

For the Moms and all those looking out for Mother Earth + Moms Around the World!

“I dedicated over 15 years of being a mother of three beautiful children. I have been a single mom for the last five years. Although very difficult, both financially and emotionally, I found inner and spiritual strength in this season of new beginnings. I decided to reach for my dreams and give it a “Goodall” try!

In 2014, I founded a nonprofit organization here in Alaska called the Alaska Wildlife Conservation Fund….better known as MOOSE MAMAS. I rescue, rehabilitate, and release orphaned moose calves back into the wild. We have reared and released 10 calves in the last two years. I fly 80 miles west of Anchorage to track the calves once a month using radio collars. So far we have 100% survival, which has never before been accomplished. The research and data that we are collecting is changing the protocol of rehab’ers from across the world. I will be starting my third calf season this Spring.

Dr. Goodall played a significant role in our success. She was my inspiration. Her dedication, passion, and determination inspired me to make a difference…one moose at a time. Now I find my little nine year old daughter reading book after book about Dr. Goodall. I see the same spark in her eyes that I had at that age. The torch is passed! Thank you Dr. Goodall!”

“I have been inspired by the work of Dr. Goodall since I was a girl. My Nana always read me stories about her studies and it fed my love of the natural world and animals. That lay dormant for years as I took on a corporate job and set to work “making something of myself.” In 2010, I saw Dr. Goodall speak in Iowa and it reminded me how powerful a force she was and had been in my childhood. It spurred me to think ecologically and work to reduce my impact on the environment. I held the story of how her mother stepped outside of her comfort zone to accompany Jane to Africa on that first expedition and thanked my own mother for the many, many ways she had encouraged me in my life.

Now, as a mother to two young children, I am back outdoors much more. We hike, learn about bugs, fear no dirt or mud or creature, camp and take the greatest joy in nature. I think about how Jane’s mother enabled her to study chimps and the story about how she did not scold her for bringing earthworms into her bed. I strive to be the mom Jane Goodall’s mom was, encouraging and open-minded. Our family is learning to embrace a zero-waste mentality – not easy in the suburbs of Iowa – but we refuse single use items and advocate for the land and animals whenever possible. We are working hard to reduce our impact and to encourage our community to do the same!”

” I saw Jane Goodall on PBS when I was about seven. It was the National Geographic documentary with Flo and FiFi and Flint at Gombe. Prior to meeting Jane, I was an avid fan of the Jaques Cousteau series and Nova, among others. We lived alone on a farm and I’ve always been an animal and nature person, so those shows nurtured…well, my soul. But, meeting Jane was the day I met my lifetime hero. From then on, I dreamed of following in her footsteps.

Growing up, I really felt like I was being prepped for a future in environmental studies of some kind. I learned, I read, I practiced and I learned some more. I developed skills and gained an arsenal of experience and knowledge. I knew I was destined to live in the bush tracking elephants or chimpanzee through their habitats, writing every thing down, capturing behavior and revelations on video. I was destined for that role. I had all of the innate qualities necessary. I had more than my fair share of passion and drive. I wasn’t afraid. I was eager. And I was genuinely compassionate, honest and intelligent. I was meant to be in the field!

But, there were outside elements at play. There were financial issues. There were social issues. And there were far too many family issues. Life was not fair. I endured a number of significant situations, overcame them all and remained determined to pursue my destiny.

As a single mom with a GED at the age of 18, I entered college. As a single mom, I struggled with all of the typical aspects of being poor in this American society. I worked full-time, I did odd jobs for extra money, I suffered and life continued to march on with fervor. It was hard to keep up and despite my desperate determination, the deaths of my sister and dad in August of 2006 damn near ruined the foundation of my core person.

Trying to satisfy that unanswered dream of committing my life to the pursuit of something greater than mankind, I have devoted my time and focus on the local flora and fauna. I spend my days watching the natural stories unfold around me. I take photographs, categorize them into classes and try identifying each organism by their scientific nomenclature. I read about them and make my own observations in comparison. I’ve seen some beautiful things and feel some sense of satisfaction, but honestly…I feel cheated. I really was destined to be there.

I have so much more to say, but I really don’t think it would add much to what I have shared. So, I stop and wait for the next opportunity to share. Thank you. ”

“I learned about Dr. Goodall’s work as a child in school. I admired her dedication, and I was fascinated by how she lived in the wild.

I have a young daughter, and I have taught her about Jane Goodall as well as other inspiring women she can look up to. My daughter chose to have Dr. Goodall’s picture painted on her bedroom wall. She also chose to spend her sixth birthday at Gorilla Forest in the Louisville Zoo where they were celebrating the first birthday of Kindi the gorilla. My hope is to pass on the legacy of Dr. Goodall to a new generation so her life’s work can continue to inspire others for many years to come.”