You are at:Home»Jane Says»The Puerto Rican Parrot: Rescued from Extinction

It was during a visit to Puerto Rico with Roots & Shoots champions, Dr. Rick and Nelly Asselta, that I heard about a perfect Good News story for this blog – the rescue of the endemic Puerto Rican Parrot from the very brink of extinction. I was eager to learn more and was introduced, by phone, to Victor Cuevas. Anxious to follow this up before the next country on my tour was upon me with all its own stories, I arranged to call Victor from the airport. We had a great talk – although the connection was horrible and there were people speaking all around me and too many announcements! However, I frantically scribbled down the main points and learned that he first became involved 1984 working for Dr. James Wiley with the U.S. Fish and Wildlife Service (USFWS), who was very passionate about these parrots.

In the late 1400s, Puerto Rico was home to probably around a million of these parrots, called Iguaca by the local Taínos people as this resembles the sound the parrots make when in flight. But the population declined as the island’s native forests were cleared – about 99% of its original habitat was lost. By 1968, when the parrot had been listed as critically endangered, there were only two dozen individuals remaining, restricted to the El Yunque National Forest (previously known as Luquillo Experimental Forest, then Caribbean National Forest) in north eastern Puerto Rico. The situation was daunting. 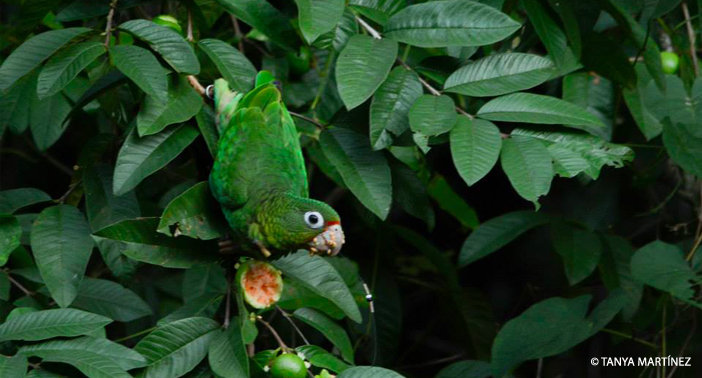 An intensive recovery effort was initiated by the US Fish and Wildlife Service, headed by Dr. James Wiley. Programs were instigated to control native and introduced predators, to block nests, for example, when the birds had left to prevent occupation by swarms of introduced bees. And biologists spent long hours in tiny blinds keeping watch over occupied nests.

Unfortunately, this last rainforest stronghold was not the optimum habitat for these parrots who prefer forests with wet and dry seasons. Periodically their nests were flooded and chicks drowned. Also there was a shortage of old trees with suitable crevices for nesting and it was decided that artificial nest sites must be provided. This was difficult and dangerous work in the early days, Victor told me, as he and the team had to climb very high – and back then they had no safety gear.

Today, the biologists have proper equipment, but they must still spend time high in the trees, suspended in uncomfortable positions as they attach artificial nest boxes fitted with surveillance cameras. And they climb again to check the nests for parasites, and to attach radio collars to the fledglings to monitor their movements after hatching. But it was all worth while – as a result of all this hard and dedicated work, the parrot population gradually increased, and in 1989 there were 47 individuals and at least 6 breeding pairs. 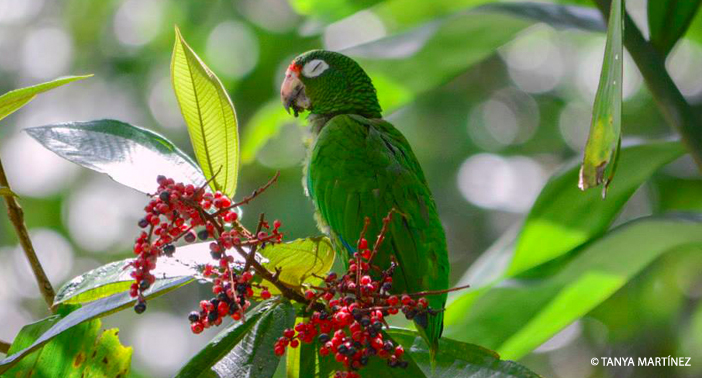 And then disaster struck – Hurricane Hugo. Only 22 birds survived.

Fortunately, in parallel with the work on the wild population, a captive breeding program had been started with the goal of ultimately releasing captive born birds back into the wild. But by the time the Luquillo Aviary was ready, in 1973, there were only 13 individuals left in the wild.

The work at the aviary, which is managed by USFWS biologist Jafet Velez, is demanding, requiring a great deal of hard work and skill. The captive flock was started with fledglings taken from the few wild nests. As the biologists developed more expertise in rearing the birds, they increased their flock mostly by adding the weaker chicks that were unlikely to survive in the wild due to sibling competition in the nest. And then, as the captive colony became more and more successful, some of the captive bred nestlings were introduced to wild nests to increase the wild population. 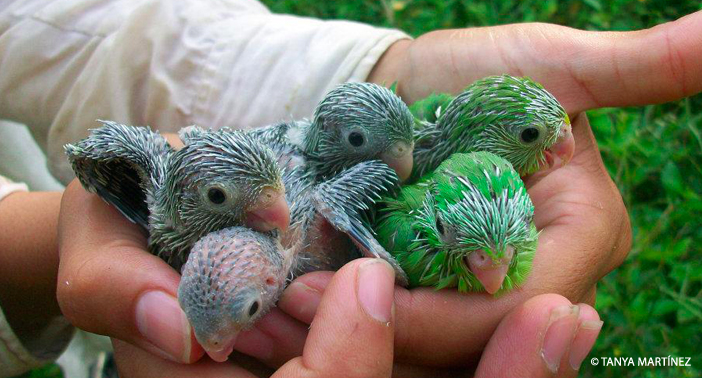 After 20 years of successful captive breeding in the Luquillo Aviary, the captive flock was big enough for the next phase of the restoration program – starting a second population in the wild to prevent catastrophic loss in the case of another bad hurricane or an outbreak of disease. The State Forest of Rio Abajo, at the opposite end of the island, was selected. It was within the parrot’s historic range, and this wet/dry forest is far more to the parrots’ liking. A brand new aviary was constructed, and Ricardo Valentín of the Department of Natural Resources of Puerto Rico, was hired as Manager after Ann and Pepe Smith. This aviary has sophisticated incubators that mimic the fluctuations in temperature that occur in a natural nest when the mother leaves for feeding. Sick babies can be treated, and cracked eggs can be repaired, though great skill is needed. 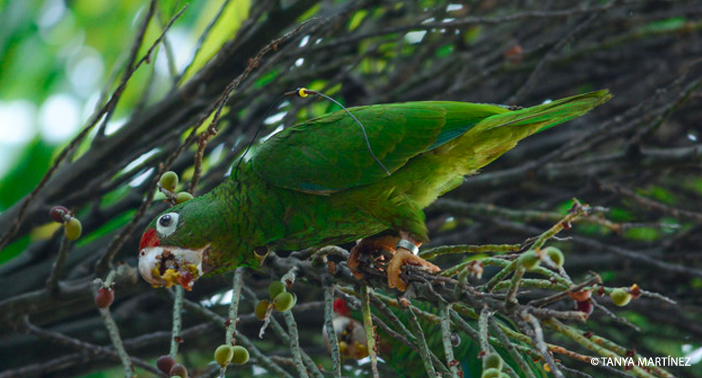 Captive breeding went well and in 2000 the first carefully selected parrots were released into the wild, but only after intensive training to hone their flight skills, avoid predators and so on. After that some birds were released each year. They have a very small tracking device around their necks so that their position can be monitored for a year, after which it falls off.

Victor introduced me via email to Tanya Martínez who, he said, has taken some of the very best photos of the parrots in the wild. She has been working with them in the Rio Abajo forest “up close and personal” she says, for years.

“We’ve known most of the birds since they were still in their eggs,” she told me “and many of them have very unique personal stories.” A parrot named Honey was born in captivity in 2007 and released into the wild in 2008. In 2012, Chonchi, another parrot – still in his egg – was transferred from the aviary into a wild nest that had produced infertile eggs. Thus he was born and raised in the wild. He became Chonchi’s second mate. “She’s a bit of a cougar,” says Tanya “as she is so much older than he is!”

This whole initiative was extremely successful so that 12 years after the first captive birds were released the new population numbered between 50 to 80 individuals, and flocks of between 15 and 30 birds are an almost daily sight from July to December. Indeed, they have flourished so much that a third release site is now planned in the Maricao Forest. Birds from the two aviaries were selected as the first inhabitants of a flight cage in Maricao forest. These birds are being trained, and will then be released in the third wild location! 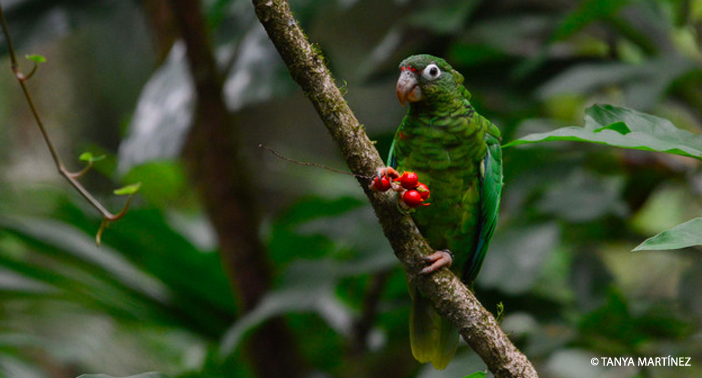 In September 2015, I kept reading about the various hurricanes that were passing through Puerto Rico. Naturally, I was concerned about my friends on the island and I worried lest the parrots were being affected. In response to my emails I got a reply from Ricardo:

“The parrots in the Rio Abajo forest have passed the last few storms with flying colors,” he wrote. “The last big one, tropical storm Irene, passed close by the aviary, but we experienced the weaker southwest side of the storm. I was very worried because the parrots roosted on a very tall, very exposed tree before the storm arrived.  But we didn’t lose a single bird, even the fledglings were OK.  Even though at that time we had some strong gusts of winds, it is probable we didn’t experience winds over fifty miles per hour. I say this because damage to the trees was minimal. We have lots of experience moving the captive population to the safety of the hurricane building – we do it every time we have a warning of tropical storms to the island and we have ways to help the wild population if a hurricane devastates the forest.” When Hurricane George swept through the release site of a different species of parrot, not one bird died, not even the fledglings. But the forest was stripped of the parrots’ food, the leaves and flowers and fruits – and 70% of the birds then died of starvation. As a result of that tragedy, the biologists have developed ways to help wild populations if their habitat is devastated by storms. 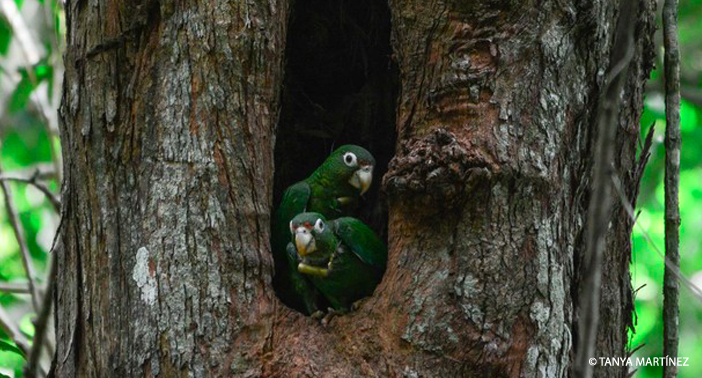 Tanya often takes photos on the top of an 80 foot tall observation platform. “There are several platforms like this one throughout the forest,” she wrote, “and we use them to conduct censuses of the wild population and also to monitor parrot nesting activities. We climb the platforms in the early hours of the morning before the sun comes up so that we can be at the top before the parrots start their morning flight.”

Victor has since told me that the third flock has not yet been established, although the birds that are going to be released are undergoing training right now. The training they do is forcing them to fly in the cage for increasingly long spans of time until they consider that the parrots are in good physical shape to be released. They make them fly for up to eight minutes at a time and then during the rest period and evaluate their physical condition. They can do up to three sets of these in a day session.

The Bird Conservation Award went to the Puerto Rican Parrot Recovery Milestone to celebrate the wild breeding of Puerto Rican Parrots in a new area of the island. This milestone is even more impressive when we recognize that there were only 13 parrots left in the wild just 40 years ago. Partners include El Yunque National Forest, the U.S. Fish and Wildlife Service’s Puerto Rican Parrot recovery program, Puerto Rico Department of Natural and Environmental Resources, and private partners. Their work has laid the foundation for future parrot population growth and for managing human use conflicts.