You are at:Home»Seriously Good For All»Climate is Changing, And So Are we: Sneak Preview of Leonardo DiCaprio’s ‘Before the Flood

A rice field under feet of brown water – the color that occurs when you mix all other colors together. An endless expanse of forest seen from above, barely, through smoke so thick it seems as though the camera lens was coated in dust. A heat map of our earth, this singular and exceptional orb encased in a purple and green magnetic field, with ice sections top and bottom now so nearly invisible.

These are the images that remain with me after ‘Before the Flood’, and they flood my mind with the complications of what it means to fully understand a subject, the outcomes and ways to move forward, coupled with unbearable horror. They represent an overwhelming sadness for what we have done, and a stirring knowledge that we must undo. Most of all the image that remains is people, frightened, and people determined. We are at the peak of a rising wave, what damage that wave does is entirely up to us.

Before I saw ‘Before the Flood’, my determination to examine the ways in which humans are affecting the balance between our existence and the existence of all other natural phenomenon was strong. I had seen, and pursued seeing, firsthand the effects of palm oil in South America, deforestation, species loss and cyclones in Africa, and had interacted with researchers from many different countries who all reflected on not having anything to study because of damage already done, sooner rather than later. This was the real of climate change, a list I was gathering more and more examples of in my encounters. But where my list failed when having conversations with those who claim “the earth has natural cycles of change,” this film washed away.

Leonardo DiCaprio for all of his abilities and accomplishments, reads as entirely filled with humility and inquisitiveness throughout the film, directed by Fisher Stevens. He is a student and an observer to what others have been working on for decades, and is candid with this position. His interview with a Dr. Sunita Narain, director of the Centre for Science and Environment in India, reveals the naivete of his own input, despite being a U.N. Messenger of Peace focusing specifically on climate change and environmentalism; he is an American who has never lived facing the consequences of environmental disaster. A citizen of a country which is the second highest emitter of CO2, with a fraction of the population of other contributors, and the most emissions per capita.

Narain takes Leo to a rice field, where an entire year of potential food and income for a farmer and community is entirely under water. They received the amount of rain normal to an entire year, in a single day. Her response to his quick retort about how most of the world is unlikely to change their behavior so we must rely on harsher laws and punishments to prevent great carbon emissions, was just as quick and even more powerful. India and China are leading the world in solar and renewable energy, while the U.S. has had access to this information and technology for decades. We are quick to turn focus onto the habits of the developing world, but who are we really if we allow lawmakers to hold hostage our ability to remove dependence on fossil fuels? Who are we and what are we doing?

Where Leo goes on this film, we venture with him – his reactions as unfiltered and inelegant as they might be if we were to witness in a helicopter zero visibility from how much of the forest is being burned in Indonesia. To see as far in any direction that millions and millions of acres of rainforest, which regulates and sequesters most of the world’s CO2 and temperature and water, have been entirely removed for palm oil plantations. In some estimates, the entirety of Sumatran Rainforest will be gone in 20 years, removing habitat for precious and unique places where tigers, rhinos, elephants and orangutan all live together.  If we were to see an entire multi-million dollar film crew fly from Canada to Argentina just to have enough snow to complete the production. If we were to speak with the leader of an archipelago of islands in the pacific, who was forced to create a strategy for allowing people from the islands an option to leave a home now only partially under water, before it is completely under the sea. It is a bombardment of visuals which leaves you bewildered and furious. It also has an enlivening snow globe effect – to see all of the beauty in the world in such a perspective which puts its fragility in our hands. 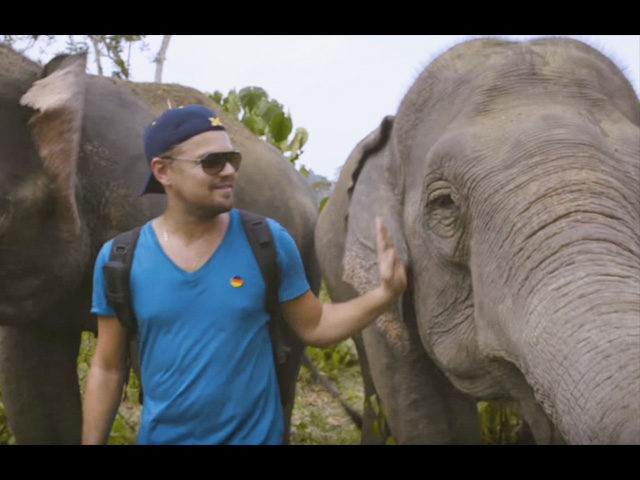 Many of the suggestions the film and those interviewed put forward regarding steps to turn down the dial of our path toward “oceans of slime devoid of all other life,” or increased war over scarce resources and displacement of people due to altered environments, or the loss of thousands to millions of species of plant and animal life, are simple. Eat less red meat – methane that is released from commercial cattle along with areas cleared for them is a crippling and massive accelerator of climate change. Shift the demand – what we buy influences the market. DiCaprio briefly addresses his own damage to the planet – the travel, the filmmaking – how it also contributes enormously to the problem. This is what we must all do, take a moment to examine what we truly need and what lifestyle choices we can change to lessen how we add to the problem, and show the world who we are. Those in poverty and without access are the ones first and most affected by climate change. We all have a responsibility to our shared home and to each other. We are a bunch of terrified and sometimes selfish humans, but we are also determined to do better.

What films like this one open up inside of us is a hope in knowing that everyday is a new day, and each day we can make a difference. That there are more of us that want a viable and healthy planet and have the actual forcible numbers to demand better from those in public office. That investing in innovative companies, or renewable energy, or even just holding corporations to better standards for sources of ingredients like palm oil, can completely change our course. Enforcing a carbon tax and attainable goals for production and emissions globally, in the same way that increasing cigarette taxes and prices shifted a culture away from harm, will change everything. It is time.

One interview in particular stands out, though many discussions were intriguing and informative including with President Obama and the Pope Francis. Piers Sellers, former astronaut turned climate model creator, shares with Leonardo a satellite map of the world, talks about the magnificence of watching a sunrise over the entire Amazon river, as it lets out into the ocean. He tells DiCaprio he is dying of cancer, and yet he believes we can redeem ourselves and save the world from environmental destruction. He knows he does not have long for this world, but his love and respect for all living things ushers in hope for humanity. And that is the ultimate resolve. Regardless of whether we care because we want to protect a future for our children, or whether we have economic interests or our individual homes are threatened, we should care because we have a love and respect for all living things. And there is hope for us, there always is if we listen and act.

‘Before the Flood’ premieres at 9 PM ET Sunday, October 30, on National Geographic Channels in 171 countries and 45 languages. the Jane Goodall Institute staff were able to see a sneak preview this past week at American University, hosted by Defenders of Wildlife. Watch it here streaming for free.