When we were young, we would sing “a dream is a wish your heart makes.” Beyond the pixie dust choking that sentiment, there is a core of truth. When we wish for better days and better situations, it is a dream our heart makes. That is the task of the Roots & Shoots youth program, and the inspiration Jane Goodall has provided the next generation – to dream, and to turn those thoughts into wishes. What young people do with those wishes, is turn them into action.

In St. Louis Park, a group of young people leading a JGI Roots & Shoots chapter out of their high school have a wish for their city: “Our wish is that the City of St. Louis Park accepts our climate inheritance resolution and proceeds to develop a Climate Action plan that brings the city to net zero carbon emissions.” During a recent meeting of the St. Louis Park Council, Roots & Shoots youth leaders graded the council giving the governing body a lot to think about in terms of how they measure up in their responsibilities for the environment and sustainability.

The grades included a D-minus for a zero emissions plan, and a C for Carbon removal, balanced out by an A+ on waste and A- in renewable energy. With a B- overall for what they dubbed a “Youth Climate Report Card,” the teens held up a strong reflection of where the city needs to improve and even stronger demands for how it can change. The mayor joked of the report’s results, using common scholastic lines like, “He does a fine job, but he doesn’t apply himself as much as he could.” And that’s exactly what the students had to say and expect from their city – better application of resources for better treatment of the environment.

“I think we do good work, but we can do more and we can do better,” Mayor Spano said.

Following the council hearing, the city of St. Louis Park didn’t exactly “grant their wish,” but have made clear motions towards fulfilling the dreams of the city’s youth. The Climate Inheritance Resolution presented by the Roots & Shoots group was accepted and is being included in a Climate Action Plan run by the Board of Sustainability (which includes one of the R&S members). The plan seeks to decrease “greenhouse gas emissions to levels that would protect our community’s children and grandchildren from the risk of climate destruction.” 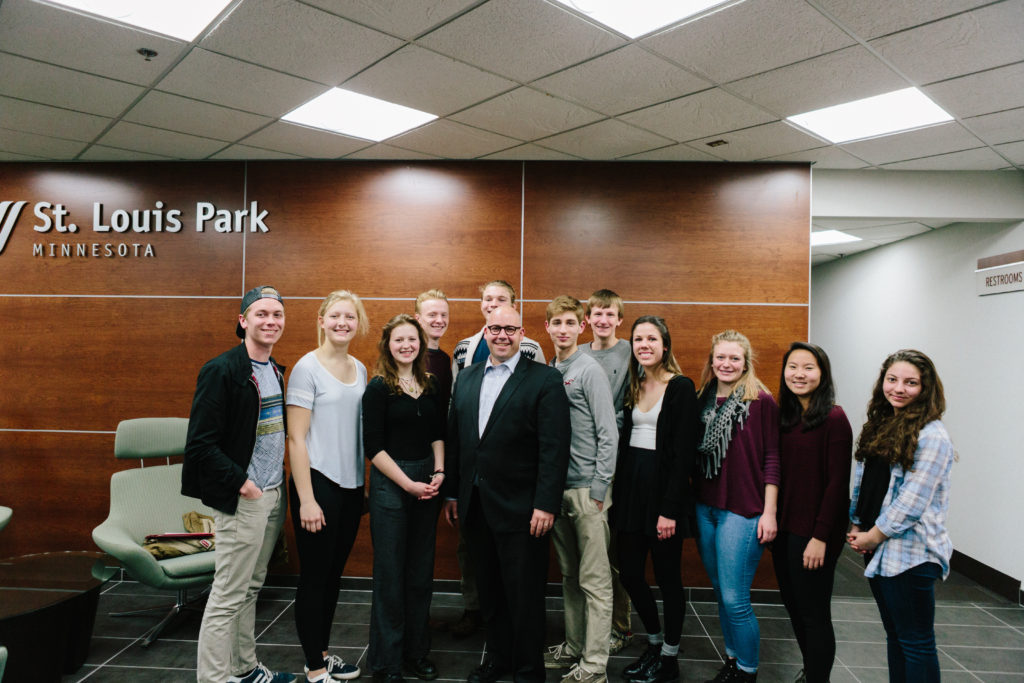 Roots & Shoots members with the Mayor

“The time to act is now. We shouldn’t have to be afraid of our future,” said Jayne Stevenson, a junior and youth member of the city’s Environment and Sustainability Commission.

To create the report card, the teens used a tool created by iMatter (a national youth climate organization) known as The Youth Climate Report Card, which grades cities on their contribution to reducing greenhouse gas emissions. iMatternow, a branch of this group, mobilizes movements to actualize change by encouraging and supporting students demanding better legislation and policy in their cities – this council hearing was their first.

The project is a testament to what simple moments contribute to vast waves of understanding and reformation for a greater level of sustainability in our urban places, or any place for that matter. It is through the coming together of young minds, dreamy minds, that thoughts take form and are presented to people with the ability to make them real. This kind of action is not limited to the young, and we can certainly learn from the focus and attitude of this Roots & Shoots Project of the Month!

Let’s also learn from Henry David Thoreau about the importance of transforming thought into drive:

You can learn about other Jane Goodall’s Roots & Shoots Program projects and get started on your very own today!