You are at:Home»Conservation»Stop “Catching ’em All”

Two universes collided this past week as Nintendo released its newest addition to their line of Pokemon games: Pokemon Go. The new game uses augmented reality (AR) to bring the world of Pokemon to life quite literally in players’ backyards.

Players use their smartphones to search for any Pokemon that might be near them. The app taps into the phone’s GPS location and camera to show the Pokemon moving around in the real world.

Of course, like the many Pokemon games before this one, the goal is to “catch ‘em all.” As players explore their world, they capture new pokemon, adding them to their pokedex where they can learn more about them. The app’s popularity has skyrocketed since the first days of its release, and it seems like people are searching for these critters just about everywhere. This frenzy to capture pokemon is beginning parallel what real life creatures are facing in the world today. 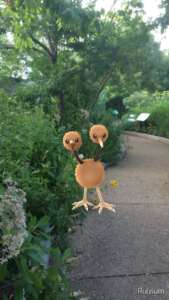 A wild Doduo appears in the gardens near Smithsonian’s Natural History Museum.

While it may be fun to collect and train these digital animals in the Pokeverse, the animals in our own universe were not meant to share this same fate. Wild animals suffer immensely in captivity. Unfortunately for them however, wildlife trafficking is one of the biggest threats facing our world’s endangered species. Animals are either captured or killed every day by poachers looking to sell them, or their parts, on the black market.

In the case of chimpanzees, many are hunted for their meat in some areas of Africa. When a mother chimp with an infant is killed, its baby is often captured to be sold as a pet. In fact, according to Scientific American, it’s estimated that for every live chimp taken from the wild, ten additional chimps are killed in the process. Demand for exotic pets is high among the world’s wealthy, who view dangerous and exotic animals as a status symbol. On average, an illegally owned live ape is confiscated from someone in the world twice per week, according to an Al Jazeera report. In the United States there is currently no nationwide ban on ownership of wild animals, only a patchwork of state laws of varying degrees of strictness. 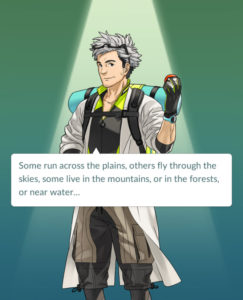 Much like in our own world, the world of Pokemon is full of diverse creatures.

Unlike pokemon, who can be comfortably captured in a pokeball, wild animals suffer when they are brought into unfamiliar and unnatural habitats. According to The Dodo, as many as 4 out of 5 illegally trafficked animals die during transit or within their first year in captivity. Private animal enclosures are often inadequate in both size and habitat, and even the most dedicated owners may not have the proper veterinary expertise to care for them. As a result, wild animals experience a reduced lifespan in captivity. Hermit crabs, which can live up to 30 years in the wild, tend to last only 1 to 2 years when kept as pets.

Wild pets also present a danger to their owners as well as others in their community. While pokemon are easily trained, wild animals have not evolved to obey humans. They retain their wild instincts, even when habituated to humans from infancy. As tiger cubs and baby chimpanzees grow older, they grow stronger and harder to control. This has lead to several instances of owners getting attacked by their exotic pets. Smaller animals, like reptiles and amphibians, can present a serious risk of diseases like salmonella as well.

To ensure the welfare of both animals and humans, and protect the future of endangered species, the trade of exotic pets can’t be allowed to continue. No live animal deserves to be taken from its home. So let’s leave the capturing to the Pokeverse, and keep our world’s wild animals roaming free.