Today is World Refugee Day. A day for us to reflect on the plight of the hundreds of thousands of refugees around the world. People – men, women, and children – who have escaped from countries torn apart by the horrors of war and violence. Or left their homes and all that they know in their desperation to find a future that is not blighted by crippling poverty. Or wanting to be reunited with family members who have already left. There are people trapped in refugee camps throughout Europe and Africa, often in the most terrible conditions. People for whom the very concept of living a normal life must seem unreal, like a distant dream. On this day of all days they need our prayers. And our help.

The current migrant crisis in Europe is the worst since World War II. The conflict in Syria alone has now displaced more than 12 million people and other conflicts, persecution and poverty around the world have driven ever larger numbers to leave their homes. The website, A visual guide to 75 years of major refugee crises around the world, gives a chilling picture of the multitudes who have been affected.

During the past few years thousands of refugees have arrived in the European Union – more than one million in 2015 alone. All hoping to find asylum in Europe or beyond. Some of the most heart wrenching stories concern the multitude of asylum seekers – from the Middle East and Africa – who try to reach Europe by sea. Unscrupulous human smugglers make a living off human desperation and misery, charging exorbitant amounts to arrange transport across the Mediterranean or over the Aegean Sea. People use these men when they know no other way. Thousands never make it. In 2015 alone it was estimated that 3,485 people were drowned or lost or presumed dead as they tried to cross the Mediterranean, and thousands more died trying to cross from Libya to Italy across the Aegean Sea (more than 1,000 drowned during just one terrible week earlier this year). 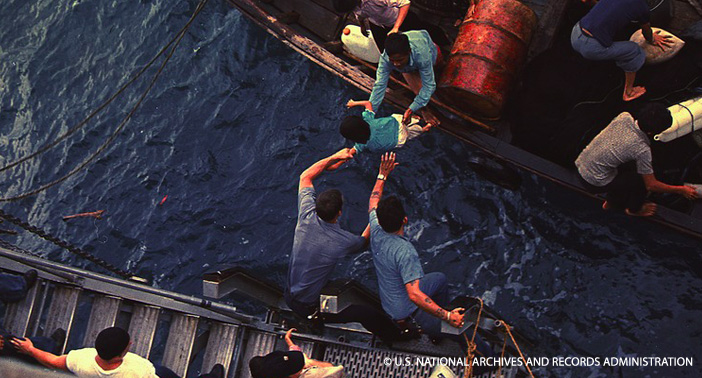 Crewmen of the amphibious cargo ship USS Durham take Vietnamese refugees aboard a small craft in the South China Sea.

The stories of those that survive are often horrific. They describe being crammed like sardines into rickety, unseaworthy boats, those in the middle unable to move and forced to urinate on each other. Often the boat is stopped by the authorities and forced to return to the shore. Nevertheless some migrants try again and again. Why do they not give up? They have no option, they say. Either they are afraid to go back to the country from which they fled, or they are desperate to find jobs to support their families. Many young African men, whose families are expecting money, dare not return if they have failed to get jobs – their families will be angry, shun them as failures. For all these people the risk of drowning at sea is no worse a fate than what they must face if they are not able to leave. The fact that they are willing to risk not only their own lives, but those of their children, speaks to the sheer desperation of so many of them. Can you imagine being in that situation? Pause for a moment and think about it. Can you imagine it?

Migrants who make it and apply for asylum are often forced to stay in camps waiting to have their case considered. One example is on the island of Lesbos off the Greek coast. Another is the off shore detention centre in Australia. It can be months before their applications for asylum are processed, and those who are refused asylum may be forcibly sent back to the country they have fled, sometimes to face persecution and perhaps death. 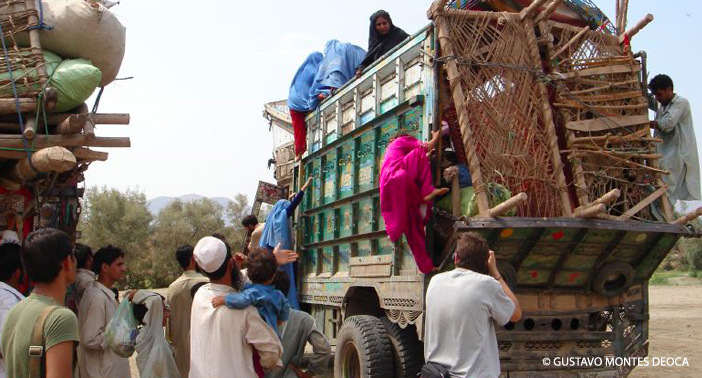 Refugees climb aboard a transport bus in Afghanistan.

Migrants hoping to reach the United Kingdom wait in camps in Calais and Dunkirk on the French side of the English Channel. Many try to reach the British shore hidden in trucks of freight being ferried across, or going via the Chunnel. Most recently they are risking the crossing of the English channel in small boats. And if they do make it, the processing of those applying for asylum is painfully slow.

For most people who watched the tide of human misery on their TV screens or read about it in newspapers it was shocking, terrible – but unreal. It was a tragedy too vast for them to truly comprehend. And then one image, out of all the thousands of images, went straight into our hearts. A little Syrian child, three year old Alan Kurdi, drowned along with his brother and mother. The photo showed the tiny body that had been washed onto the shore, then being carried, tenderly, out of the water. “Humanity Washed Ashore” read the headline. And it went viral. Alan became a symbol of the refugee crisis sweeping Europe. Suddenly we were connected, viscerally, to the reality of that crisis. “Suppose that had been our child?” thought parents. 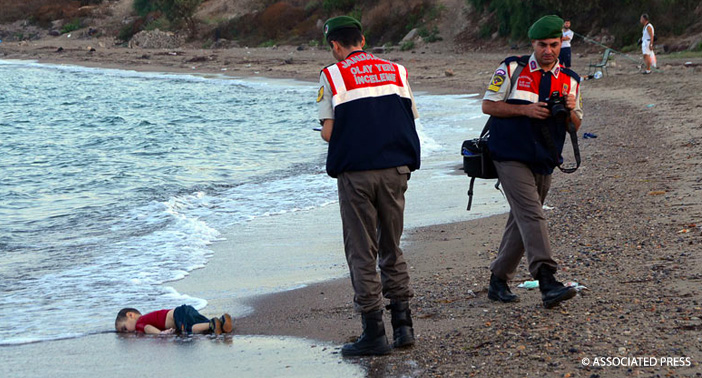 The body of 3 year old Alan Kurdi washed up on the popular tourist beach in Bodrum, Turkey.

It is the stories of individuals hat help us to understand that these refugees are real people with hopes and fears. Help us to imagine what it must be like to know such fear or desperation or hopelessness.

The drowning of little Alan and the other images of frightened, desperate men, women and children, cold and hungry and frightened, touched people’s hearts. New NGOs were formed, donations flooded into charitable organizations. Thousands of people moved by the desperate scenes they had seen on the news flooded into Lesbos and other camps to volunteer their help. “During the summer I thought we had lost our city” one Greek citizen said, “like we couldn’t come here anymore as there were so many migrants around. But then I saw them arrive by boat, and heard their ordeal, and I started to help them. I drove there, gave them food and water. My ancestors are from Ayvalik in Turkey — the refugee story is eternal.”

Initially these grassroots efforts flourished. In Germany, hundreds of people turned out to volunteer at train stations that were transformed into receiving centres where the refugees were sheltered, fed and made to feel welcome. Solidarity marches were staged in cities across Germany. Angela Merkel was seen as a heroine. The Jane Goodall Institute (JGI) Germany played a major role, being among the first to volunteer to greet the hundreds who arrived, tired and frightened, in the Munich railway station. 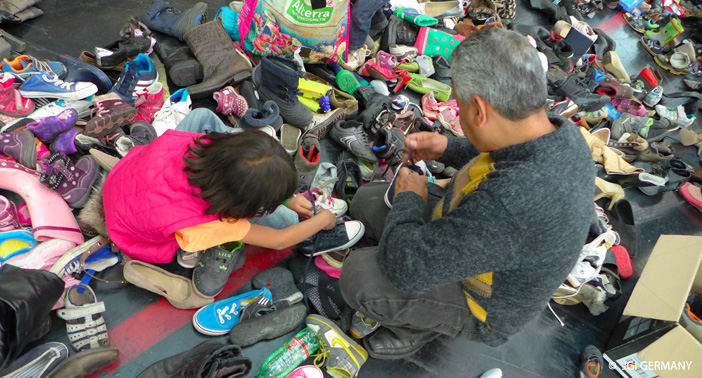 A young refugee girl tries to find her size shoes out of a pile of donated clothes.

I suppose it is not surprising, although it is deeply disturbing, to learn that the response of many governments to the current massive tide of human misery seeking asylum has become increasingly restrictive as the numbers increase. In many European countries there is growing concern that an influx of migrants will have devastating effects – that they will abuse welfare systems, take away jobs needed by local people, and threaten their cultural values. And, of course, there are fears of Islamic terrorist attacks. Recently, when I was in Slovakia and Hungary, I heard that there were newly formed vigilante groups created to patrol streets and trains searching for migrants – whom they then arrest, illegally, and hand over to the police.

Fences have been built along borders between European countries, often guarded by soldiers with guns, and there are heart wrenching tales of refugees, some of whom have already walked for hundreds of miles and are physically and emotionally exhausted, suddenly encountering newly created barriers and having to walk many more miles to avoid crossing into hostile, unwelcoming countries. Carrying as many of their possessions as they can – often including small children. Not surprisingly there are aggressive exchanges that can become violent.

Today the mood in Germany has changed. Merkel is facing her lowest ratings because of her liberal attitude to the refugees. But volunteer groups like JGI-Germany continue to do all that they can, planning picnics in the summer where citizens and refugees can join to share food and stories. And there are stories from around the world of families who are opening their doors and welcoming refugees into their homes. I was moved when I arrived in Madrid at the beginning of June, to see a large banner high on the City Hall, “Refugees Welcome” – and the Spanish are suffering from their own economic crisis. In Gerona, a rapidly growing group of citizens was camping outside the government building demanding greater support for refugees. I stopped and talked with them expressing solidarity.

We must be grateful to those who are not just wringing their hands over the crisis, but who are actively helping. And on this day, let us all think, and think deeply, if there is anything WE can do to make a difference. Some who read these words understand the plight of the refugees only too well, for they too have fled violence. For the rest of us, let us try to imagine. Suppose it was not little Alan whose photo so moved you, but your own child, or some child you know, who was washed up on a foreign shore. Think and pray and then follow where your heart leads you.