You are at:Home»Jane Says»The Story of How a Hen Lays an Egg

One story has been told many times because it shows how, even as a four-year-old, I already had the makings of a true naturalist. Vanne (my mum) had taken me to stay with my father’s mother, Mrs. Nutt (I called her Danny Nutt because I could not say “granny”), at the family farm. One of my tasks was to collect the hens’ eggs. As the days passed, I became more and more puzzled. Where on a chicken was there an opening big enough for an egg to come out? Apparently no one explained this properly, so I must have decided to find out for myself. I followed a hen into one of the little wooden henhouses—but of course, as I crawled after her she gave horrified squawks and hurriedly left. My young brain must have then worked out that I would have to be there first. So I crawled into another henhouse and waited, hoping a hen would come in to lay. And there I remained, crouched silently in one corner, concealed in some straw, waiting. At last a hen came in, scratched about in the straw, and settled herself on her makeshift nest just in front of me. I must have kept very still or she would have been disturbed. Presently the hen half stood and I saw a round white object gradually protruding from the feathers between her legs. Suddenly with a plop, the egg landed on the straw. With clucks of pleasure the hen shook her feathers, nudged the egg with her beak, and left. It is quite extraordinary how clearly I remember that whole sequence of events. 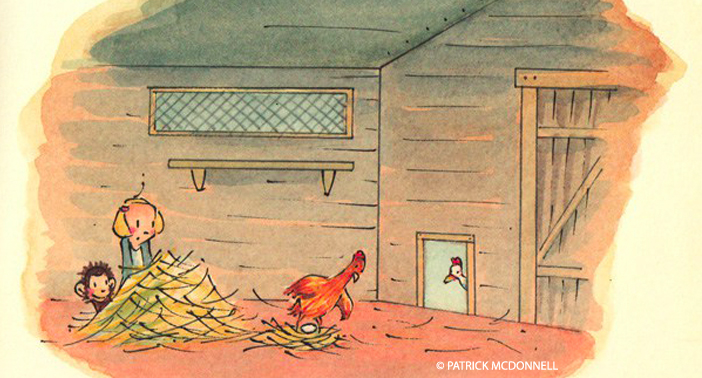 Filled with excitement I squeeze out after her and ran home. It was almost dark—I had been in that small stuffy henhouse for nearly four hours. I was oblivious of the fact that no one had known where I was, and the whole household had been searching for me. They had even called the police to report me missing. Yet despite her worry, when mum, still searching, saw the excited little girl rushing toward the house, she did not scold me. She noticed my shining eyes and sat down to listen to the story of how a hen lays an egg: the wonder of that moment when the egg finally fell to the ground.

The picture above is taken from Patrick McDonnell’s children’s book, Me…Jane, an illustrated story of a young Jane Goodall’s journey with Jubilee, her stuffed toy chimpanzee.