A glossy white billboard soars above young children’s heads bearing larger-than-life images of a chimpanzee and a gorilla under the declaration Protect the Chimpanzees and Gorillas: The Congo’s Heritage for Future Generations. Connecting the images of the two apes, with their matching brilliant black coats of fur and proud gazes off into the distance, is a small flag of the Republic of Congo. The billboard, one of over 60 in the Congo designed by the Jane Goodall Institute, is meant to inspire local and national pride in the Congo’s great ape populations, in order to encourage locals to protect their natural national treasures. On the back of the billboard, in an aligned effort to discourage poaching, is a message about the consequences of being caught illegally possessing a great ape or its body parts.

JGI’s 60 billboards in the Congo promote national pride for great apes and educate about the illegality of poaching and trading wild apes whether alive or dead.

The picture of the billboard is featured in a newly released report by the International Union for Conservation of Nature (IUCN) for its simplicity and effectiveness in promoting conservation values in local communities in great ape territory. The report is the IUCN’s second regional action plan for the conservation of western lowland gorillas and central chimpanzees for 2015 to 2025. The first plan covered conservation efforts from 2005 to 2015.

The plan delineates 18 “priority conservation areas” in Western Equatorial Africa where protection of central chimpanzees and western lowland gorillas is critically needed. These areas, which contain at least one protected area and over 5,000 apes each, cover 51 percent of the range of these two subspecies of great apes, but holds over 77 percent of the subspecies’ populations. The plan examines the many threats that these species and areas face, and how conservationists will address these pressures in the next decade.

The plan is especially important in light of another recently released IUCN report which details the inadequacy of past responses to the rapid decline of wildlife in West and Central Africa.The IUCN situation analysis of terrestrial and freshwater fauna in West and Central Africa released in June insists that countries in the region need to immediately update their legislation and enforcement of existing laws if they are to meet global targets for protection of biodiversity. The bleak report is an urgent call to action and makes IUCN’s new conservation program more important than ever.

Aside from highlighting the Jane Goodall Institute’s use of billboards to promote conservation education and outreach in local communities, here are 5 other ways IUCN’s new action plan mirrors JGI’s mission and own conservation actions: 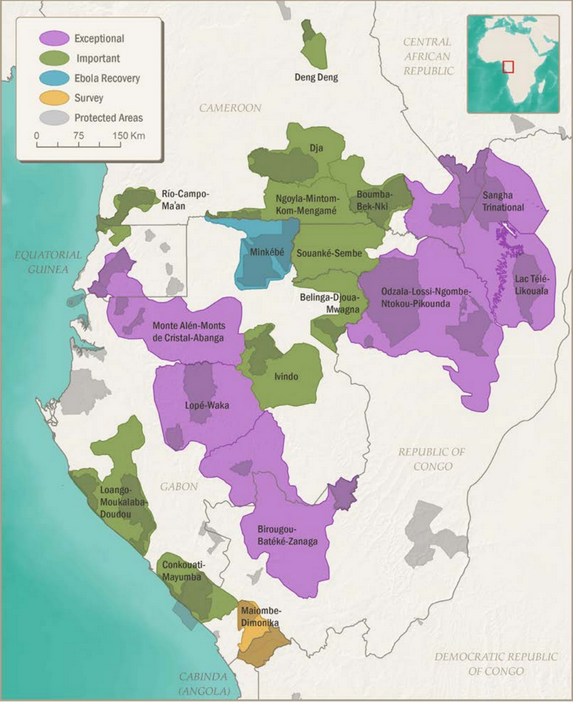 1. Protecting Apes Across Borders
IUCN’s plan highlights the need for not only protecting as many apes as possible across six different countries but for protecting them through collaboration across park and international boundaries. JGI, as a global organization, believes in preserving all great ape habitat and currently operates its Africa programs in four different countries — Tanzania, Democratic Republic of Congo (DRC), Republic of Congo and Uganda — in its efforts to improve the lives of great apes and their human neighbors.

2. Facilitating and Aiding National and Local Land-use Planning
The new action plan concludes that national and regional land-use planning is of critical importance because it prevents ape habitats from becoming fragmented islands which cannot sustain healthy populations. JGI believes in land-use planning and has helped to create dozens of land-use plans in Tanzania which protected over 200,000 acres of habitat for conservation purposes. JGI also helps Ugandans manage their private forests and has promoted the planting of forest reserves in the DRC and Tanzania to decrease deforestation pressures on ape habitat.

3. Supporting Ecoguards
IUCN encourages the training and use of ecoguards to increase law enforcement’s capacity to enforce laws on illegal poaching and capture of wild apes. Ecoguards serve a wide range of functions from patrolling ape habitats to seeking out illegal poachers, miners and loggers. JGI supports ecoguards for their protection of habitats and wildlife and has helped increase the capacity for ecoguards in Uganda and Republic of Congo to manage protected areas.

4. Training Locals and Rangers in Great Ape Monitoring Methods
Many of the 18 areas in IUCN’s plan require establishing or maintaining current standardized great ape monitoring programs and training personnel on how to monitor great apes. JGI has trained over 150 forest monitors on how to use mobile technology to monitor great apes and their habitats. This information has helped law enforcement understand more about the illegal trading of apes so that they can better crack down on crime. The data also proves useful for planning conservation efforts and monitoring how well programs in place are working.

5. Fighting Disease in Great Apes through Health Education
It’s possible for humans and apes to transmit diseases to one another because of their genetic similarities. In order to combat disease transmission, particularly of ebola, IUCN promotes health education programs that teach people how to safeguard against diseases themselves. This effort falls in line with JGI’s ongoing efforts to improve the human lives of those who share and border chimpanzee habitat. In 2013 alone, JGI helped 60,000 people gain access to better health facilities! JGI’s monitoring programs also monitor ape health and are used to identify and track disease outbreaks.

JGI is no stranger to conservation action plans. In 2013, JGI supported plans that protected over 1.3 million acres of habitat. JGI is excited by IUCN’s new action plan which aims to protect 655,800 square kilometers of great ape habitat, and is even more excited to see the plan incorporate practices that JGI values for their tried-and-true positive impacts.

You can learn more about IUCN’s new conservation action plan on their site.
Stay current on JGI’s conservation efforts by reading our most recent Pant Hoot Update.