You are at:Home»Youth Power»Program Spotlight: Peer to Peer Education Project

Would you believe that something as simple as access to feminine hygiene products can drastically improve the life and future of a girl in Africa?

Sadly, many girls in Africa never finish their schooling. In fact, due to many families’ strained economic resources, many never even begin their education. Instead, girls often stay at home to contribute to the household before marrying and having children at a very young age.

For girls who are lucky enough to attend school, their education often comes to a halt once they begin to go through puberty. This is due to the difficulty of obtaining feminine hygiene supplies, which are too expensive for many families to afford. Without these supplies girls cannot attend classes and instead must remain at home, erasing their chances of completing their education.

To illustrate the importance of this program, we’d like to share with you the story of Jerline and Lilian, two girls who have benefitted from this project. 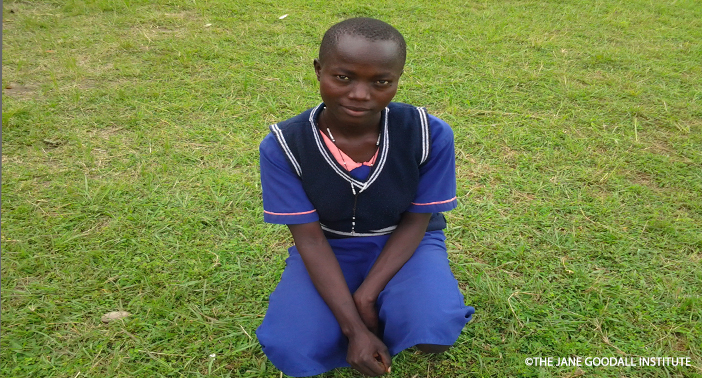 Both Jerline and Lilian come from the Moyo District in northern Uganda, where a staggering 80% of girls are forced to drop out of school, the highest female dropout rate in the entire nation. The area also boasts a forest habitat which is home to a population of wild chimpanzees.

Jerline is a Peer Educator trained by JGI, and says that our Peer to Peer Education project has made her more confident in her ability to handle life’s challenges and helped her on her way to finishing her primary education. She has become not only a model student in her community, but also a young woman that her peers can look up to.

One of the girls who looks up to Jerline is Jerline’s friend, Lilian. Lilian was forced to drop out of school after the death of her father put significant financial strains on her family. Once she reached puberty, Lilian was unable to afford the simple materials, such as underwear and sanitary pads, that she needed to continue going to school.

Lilian spoke to her Peer Edcuator friend Jerline about these difficulties, and soon JGI was able to get Lilian back in school by supplying her with the resources she needed to continue her education. Helping young girls like Lilian finish their education is absolutely critical if JGI is to improve the lives of communities in Africa and preserve the chimpanzee habitats surrounding those communities.

It is amazing that something as simple as a sanitary pad can make such a difference in the life and education of a girl in Africa.
This program spotlight was written in honor of United Nation’s World Population Day. Established by the United Nations in 1989, World Population Day is aimed at increasing global awareness about population issues. Issues concerning population are related to a variety of other concerns, including to gender equality, human rights and conservation.

Read about our Girls’ Scholarship Project.
Donate to help JGI fund these and other critical programs.