You are at:Home»Primates»Gombe Gets a New Alpha – The Fall of Ferdinand
Showing 2 of 6
Prev Next 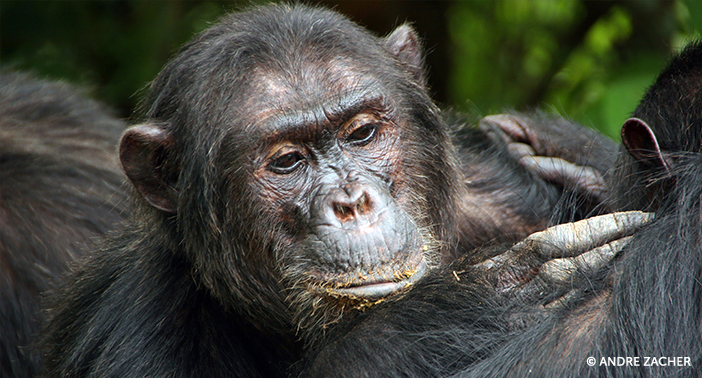 When it comes to chimpanzees, the fight to be on top is key for access to mates and food. At Gombe National Park, Tanzania, where Jane Goodall first studied wild chimpanzees, this struggle has been displayed many times. In chimpanzee societies, males live in a hierarchy and all adult males dominate females, while females have their own hierarchy. Things that impact your ability to be an alpha or higher or lower on the ladder include age, fitness, aggressiveness, intelligence and what we would consider “leadership” or ability to get others on your side. All of this might sound familiar to anyone who has lived through middle school, a traffic jam, or basically any other human group interaction!

Ferdinand, 24, ironically named for the peace-loving bull, is the alpha male of his group at Gombe. He has maintained his position by intimidation, threats and surprise attacks including biting and marking all his rivals with a tell-tale scar on their backs. A testament to his combative nature, after Ferdinand had deposed the preceding alpha, Kris, he had continued to hound and ambush him. Kris disappeared from the group badly wounded, and was never allowed back into the group. This warrior chimpanzee – Gombe’s alpha male of eight years, Ferdinand – has been toppled from his rank position in a violent challenge by none other than his nephew, the 19-year old male named Fudge.